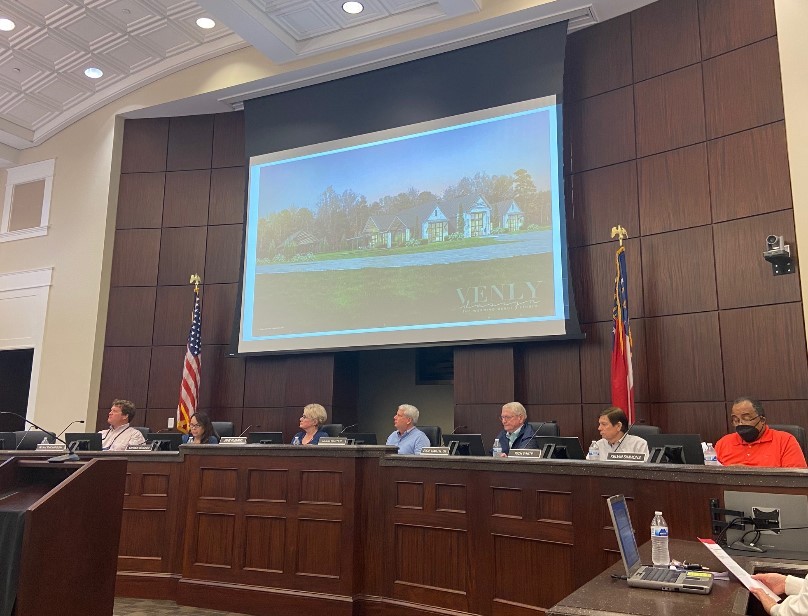 The Gainesville Planning and Appeals Board hears a request for a wedding and wine-tasting venue at their meeting Tuesday.
Photo by Caleb Hutchins
Contact Editor

A request to build a wedding and wine-tasting event venue off of McEver Road in Gainesville was denied by the city's planning and appeals board Tuesday.

Angela Zubar was looking to amend the Planned Unit Development zoning of a just-over three-acre property on Pemmican Run to allow for the venue. She said the venue would bring revenue to the city.

"Currently, the only indoor event space is at the Lake Lanier Islands convention center and that is tax dollars going to the county," Zubar told the board. "We would bring tax dollars into the city of Gainesville. Local businesses such as restaurants and hotels in Gainesville will benefit from this exposure."

More than a dozen residents from Pemmican Run and the surrounding area attended Tuesday's meeting, with most voicing their opposition to the project.

"I don't agree with this. I don't think it's the best fit for a residential area at all," resident Denise Cullom said. "It concerns me because people will be drinking at a winery and likely with a full liquor license at a wedding venue. Also, the noise really does travel across the lake."

One resident, however, voiced his support for the project, saying he'd rather see the venue take the property than a condominium development that was previously proposed.

"Some of (the residents) are opposing it because they don't want the condos or anything to go in there. I'm afraid that if this doesn't go through, it will be very high-density housing, which is really worse for the area," Mike Smith said.

The Gainesville Planning and Appeals Board voted 5-2 to deny the request with Carmen Delgado and Jane Fleming being the two 'no' votes.

"I think that it's less disruptive to the neighborhood, having a venue like that which we are missing in the vicinity than having townhomes which produce much more traffic," Delgado said after the meeting.

Rich White, who seconded the motion to deny the request, disagreed.

"I wouldn't want it in my neighborhood. I just think it's unfair to the other property owners around the property," White said.