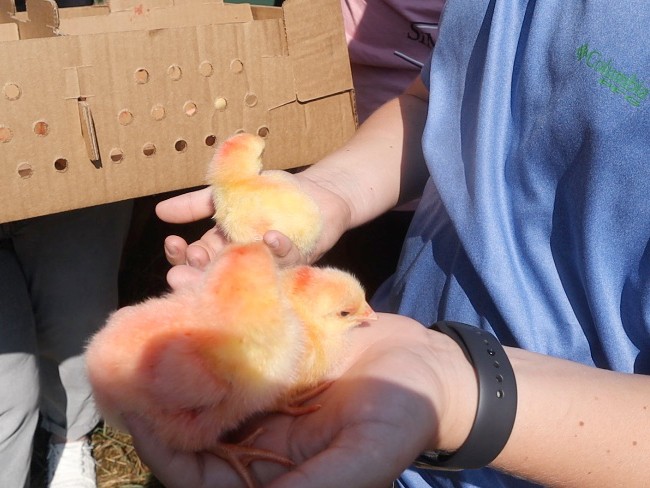 The Hall County School District is continuing to grow its 51-acre agri-business education center on Cleveland Highway by introducing poultry into the program.

A small group of students from North Hall Middle gathered at the farm yesterday afternoon as an employee from Cobb-Vantress, Inc., a poultry farm in Cleveland, delivered 50 chicks. The chicks were then taken to the middle school, where they will stay in a classroom under a brooder lamp until they are old enough to stay outdoors.

Morgan Conner, agriculture education teacher and Future Farmers of America advisor at North Hall Middle School, said students will be assigned tasks to care for the chicks as they grow.

“What I will probably do is have a list of things that have to get done for the chicks on a daily basis and assign tasks to the kids, just to make sure that they have that responsibility and know the process it takes to have poultry and chickens,” said Conner.

Conner said the chicks will stay in the classroom for approximately six to eight weeks, then move outdoors to a coop located on the grounds of the middle school. Eventually, the full-grown chickens will make their way to several coops already built at the farm. At this point, students from North Hall Middle and schools throughout Hall County will take care of the chickens.

“That’s a whole different process too, the kids making sure that they can sign up for times to make sure the chickens are feed and watered and all that,” said Conner.

While caring for the chickens may take some hard work, Conner said it is an opportunity for students to be exposed to the poultry industry. For years, Gainesville has been referred to as the “poultry capital of the world” and poultry remains one of the top industries in Georgia.

According to data from the Georgia Farm Bureau and the University of Georgia’s Center for Agribusiness and Economic Development, broiler chickens, or those raised for meat production, are the state’s top commodity.

The chicks delivered yesterday are breeder chickens, according to Conner, and will be raised to lay eggs. She said students will have the chance to learn about poultry “from start to finish.”

“Since it’s our number one industry for our state’s economy, I think it’s going to be such an awesome thing for these kids to be able to truly see it and then also potentially go into a career in that,” said Conner. “It’s going to allow the kids to see that true vertical integration of how everything is interconnected.”

Earlier this year, students transferred honeybee hives to the property. Now cattle that will be used for showing and animal husbandry/genetics studies also graze the fields.