By By Austin Eller I Video: Lauren Hunter 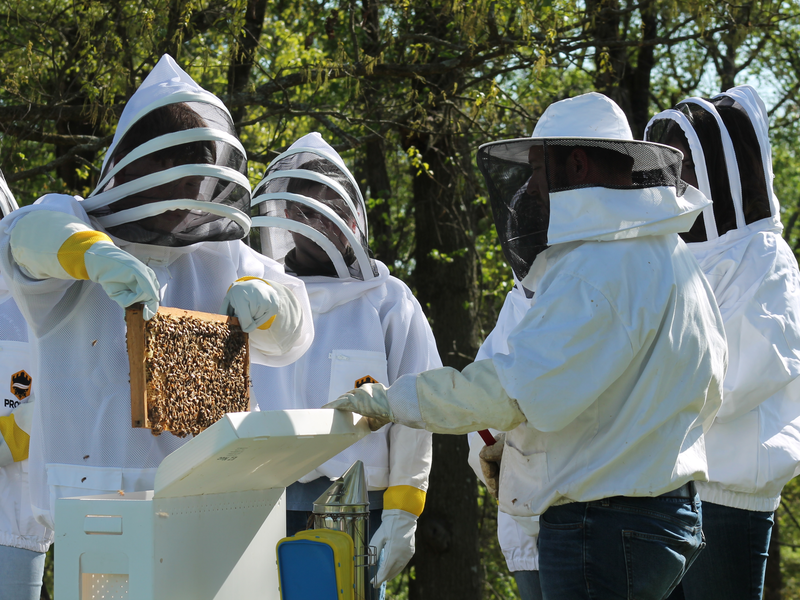 Students with the Hall County School District put the School System’s new agri-business education center on Cleveland Highway to use with the installation of beehives and their respective buzzing residents Thursday afternoon.

A group of students from East Hall and North Hall Middle Schools took the trip out to the 51-acre property to transfer the bees to their new permanent homes, the first activity on the agri-business grounds.

“We are taking the bees, and transferring them into their full-time hives,” Zach Free, agriculture teacher at East Hall Middle School said Thursday afternoon. “They are in a nuc box right now, which is just a five-frame hive, and that’s just meant to grow small colonies until they are able to get big enough and strong enough to function into their big hives that they are at.”

Free, who will teach beekeeping to the entire Hall County School District, said he personally has a background with beekeeping through a hobby farm he has at home.

The bees, which are Italian bees were all sourced from Jarret Apiaries, based out of Homer, GA.

While some of the students were slightly apprehensive at first, Free said they were more encouraged after putting on protective beekeeping gear.

“Once you have the right equipment on, the kids shouldn’t get stung in the meaning of getting hurt, anyway,” Free said. “I know the stingers, they can penetrate the gloves and the jackets a little bit, but it’s not like getting a full-fledged sting to where it’s going to leave an impact on them by any means.”

Free said this is East Hall Middle School’s first year having an agriculture program, and that students have become extremely interested in participating after learning about the new agri-business center.

“I know that when I first started, kids really didn’t know what agriculture was, and by the end of this school year coming on they are fully functional and wanting to take class,” Free said.

Moving forward, Free said he plans to take students on field trips to the agri-business center at least once a month.

The hives at the agri-business center will be ready for honey production in August, so Free said he plans to get students involved in that process as well.