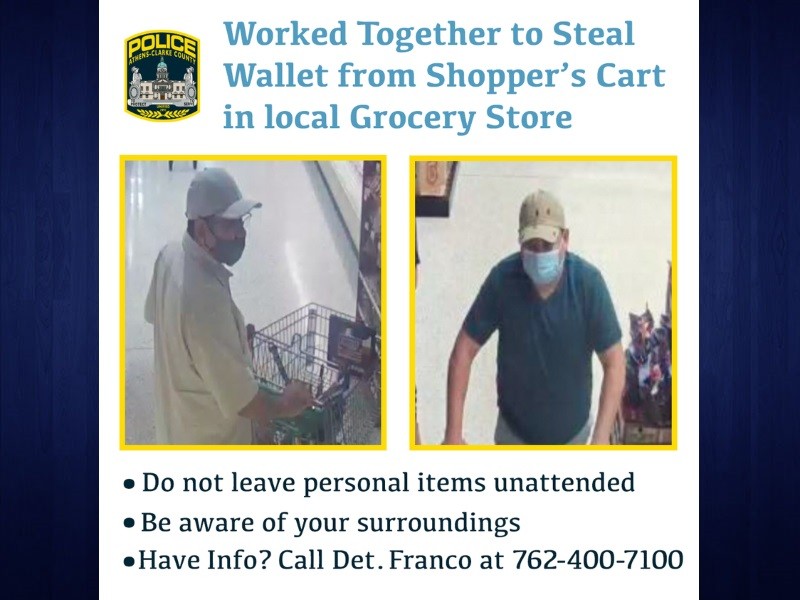 The Athens-Clarke County Police Department is on the lookout for two men who they believe are responsible for stealing wallets in several cities around the state.

Detective Nathaniel Franco with the Athens-Clarke County Police Department said two men stole a woman's wallet at a Publix in Lawrenceville on June 29. Then they stole another wallet from a 62-year-old woman at the Publix on Atlanta Highway in Athens.

Franco said the woman got to the register and realized she did not have her wallet. After checking her phone, she saw several alerts telling her that someone had tried to use her credit card at the Sam's Club on Atlanta Highway. The original charge was declined.

"Then she subsequently looked through her checking and banking information and realized that there was a second transaction with a different credit card that was successful at Sam's Club for over $4,000," Franco said.

The thieves used the Lawrenceville woman's Sam's Club membership card to get into the store.

The Athens-Clarke County Police Department posted photos of the men on their Facebook page, where a commenter pointed out that the Columbia County Sheriff's Office Facebook page made a very similar post about a wallet theft that occurred the following day at the Walmart on Bobby Jones Expressway in Augusta.

"I don't have any doubt it's the same two guys," Franco said. "... And I actually spoke to the detective in Columbia County. He believes that this same group, specifically one of these guys, has hit them probably about half dozen times."

Franco said the two men are "almost professionals at what they do" because they acted as if they were normal shoppers and communicated with each other in subtle ways to snatch the woman's wallet.

"You just have to keep your stuff close to you," Franco said. "... [Do] anything you can do to make yourself a more difficult victim."

Anyone with information on the case is encouraged to call Detective Franco at 762-400-7100.