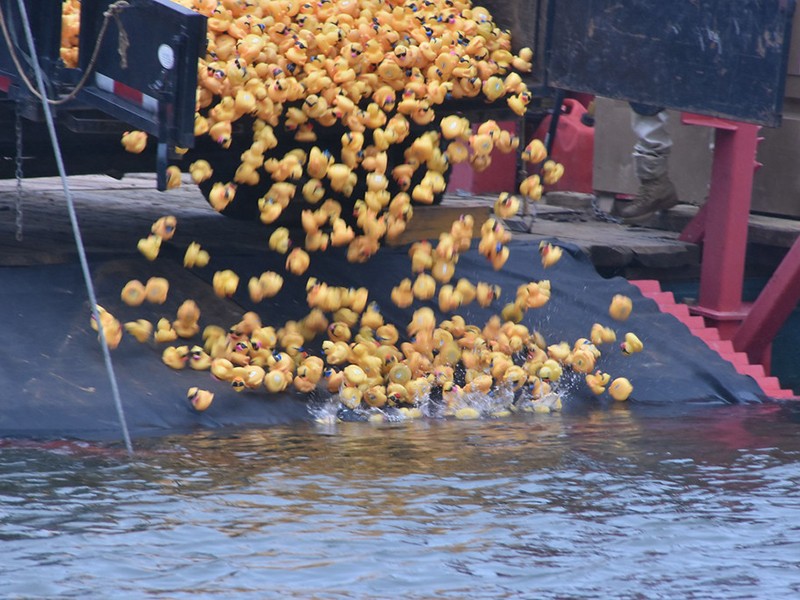 On Sat. May 15, thousands of yellow rubber ducks will race their way down a course on Lake Lanier as a part of the Boys and Girls Clubs of Lanier's 23rd annual Rubber Duck Derby Festival. (Photo credit: Brenda Bohn)
Contact Editor

On Saturday afternoon, more than 20,000 bright yellow rubber ducks will race down a charted course on Lake Lanier for the Boys and Girls Clubs of Lanier’s 23rd annual Rubber Duck Derby.

This annual event is a part of the Boys and Girls Clubs of Lanier’s Rubber Duck Derby Festival at Lake Lanier Olympic Park. This year, the festival will begin at 11 a.m. with the duck race kicking off at 2:30 p.m.

The festival benefits BGCL through the “adoption” of the rubber ducks. The cost to adopt a duck is $6 and all money goes back to the nonprofit’s 15 clubs for programming, after school activities and tutoring for BGCL’s more than 7,000 members, according to Brenda Bohn, director of development and communications.

“It supports everything that we do to keep our kids thriving and on track for great futures and great success,” said Bohn.

The first duck to cross the finish line on Saturday will win the adopter a grand prize of $10,000 cash. A total of nine prizes will be awarded for subsequent winners, ranging from a diamond solitaire from Gainesville Jewelry to a golf package for four from Chattahoochee Golf Club.

In addition to the actual derby, the festival portion is a free, family fun event with food, live music and activities for kids including a petting zoo, face painting and bounce houses.

The Rubber Duck Derby is the largest community fundraiser for the Boys and Girls Clubs of Lanier, according to Bohn. This year is the first time in two years that the nonprofit has been able to host the derby and festival together.

Bohn explained that the duck race was held in 2019, but the festival was cancelled due to bad weather. Last year the entire event was cancelled altogether due to the COVID-19 pandemic and the nonprofit hosted a virtual event instead.

“It’s so exciting to be having the festival…we are so excited to be back out and having the event at Lake Lanier Olympic Park again this year,” said Bohn.

Last year, a record 21,000 ducks were adopted for the virtual event. Bohn added that she thinks the club will meet this year’s goal.

“The community has been really supportive, our sponsors have been supportive and are enthusiastic, we’ve gotten positive feedback from everyone who has adopted ducks…so we think we’ll get to our goal of 20,000 or pretty close to that,” said Bohn.

Ducks are still available to adopt at www.rubberduckderby.com. A single duck purchase is $6, a “quack pack” of 6 ducks is $30 and a grand pack of 25 ducks costs $125. The Rubber Duck Derby website also lists each of the prizes, FAQs and more information about the Boys and Girls Clubs of Lanier.