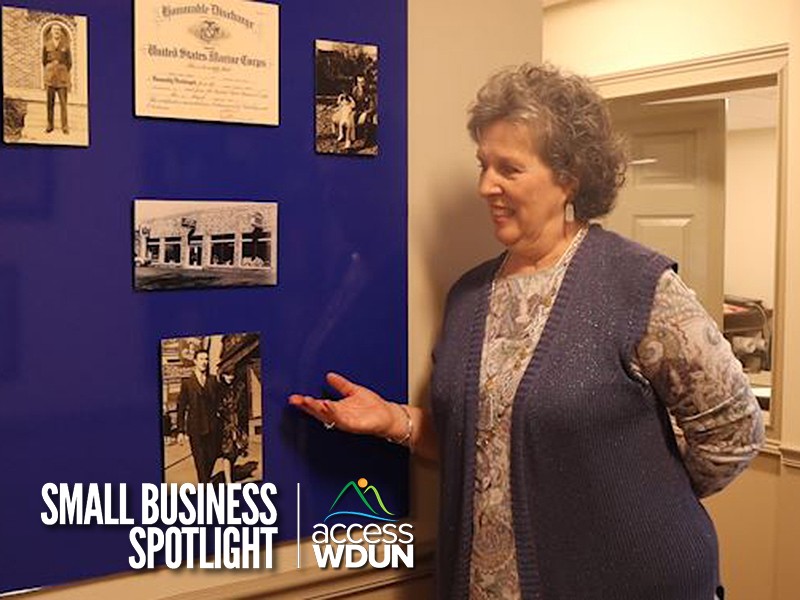 Debbie Lawson Davis, co-owner of Lawson Air Conditioning and Plumbing, Inc. and daughter of late founder L.D. Lawson, gestures to a photo of her father and mother on the company's office wall.
Contact Editor

For 75 years, the staff at Lawson Air Conditioning and Plumbing, Inc. have brought modern-day comfort to families and businesses in Northeast Georgia.

However, what separates Lawson AC and Plumbing from other companies is its rich history of commitment to the Hall County community dating back to the late 1940s.

Debbie Lawson Davis, co-owner of Lawson AC and Plumbing and daughter of late founder L.D. Lawson, said her father started the company in 1946 after returning home from service in World War II.

“Air conditioning wasn’t even really the norm back then, but [he came] back with that drive and dedication that those individuals had and he started the company,” said Davis. “Then Carrier Corporation came to him as the first independent dealer in the state of Georgia and started to talk to him about selling this newfangled idea called central air conditioning.”

Certainly, times have changed since the year L.D. Lawson installed this first AC unit, but his company has adapted along with them. Davis said that each employee is trained at least quarterly and participates in weekly roundtable discussions to stay up to date on industry standards.

For their work, Lawson AC and Plumbing has been recognized numerous times with some of the most prestigious awards in the industry.

“This year, we were so thrilled to achieve our sixth President’s Award from Carrier Corporation…less than two percent of all the Carrier dealers in the whole country achieved that designation,” said Davis.

Davis added that four years ago, she also accepted the Carrier Hall of Fame award on behalf of her father. This award is one of the highest given in the entire HVAC industry.

“So, daddy will forever be in the Hall of Fame where he belongs,” said Davis.

Lawson AC and Plumbing has its own Hall of Fame inside of the office on Dorsey Street. The walls are adorned with pictures and framed awards from each of the seven decades of the company’s work.

Davis admires each of the photos with pride, especially the ones that provide a glimpse into her happy childhood in Hall County.

Now, Davis and her husband Vince are in the process of installing that same sense of pride in their sons Taylor and Travis, as well as their daughter-in-law Ashley. All five members of the family work for Lawson AC and Plumbing.

“We also set ourselves apart by the service that we provide…we look at every customer as an individual, we make sure that we are well taken care of so that we equip our guys to have the best training to have the most cutting edge technology so that they can make sure that every individual customer, every job site and every place that you see a Lawson employee vehicle, that they're carrying the values and ideals that we have to treat our customers like family,” said Ashley Davis, who works as the human resources and business manager for Lawson AC and Plumbing.

She added that Lawson AC and Plumbing staff plan to continue that same commitment to values in years to come.

“Our goal for the future is to maintain the highest caliber of service achievable to our community by offering individual care to each customer, partner, and jobsite we encounter,” she said. “L.D. Lawson was a true pioneer and trailblazer for the HVAC industry as we know it today…his leadership and unwavering dedication to his staff, community, and customers is something that Debbie and Vince exemplify today and something that our third-generation leadership strives to continue in the future.”

To find out more about Lawson Air Conditioning and Plumbing, visit their website or click on the video above.