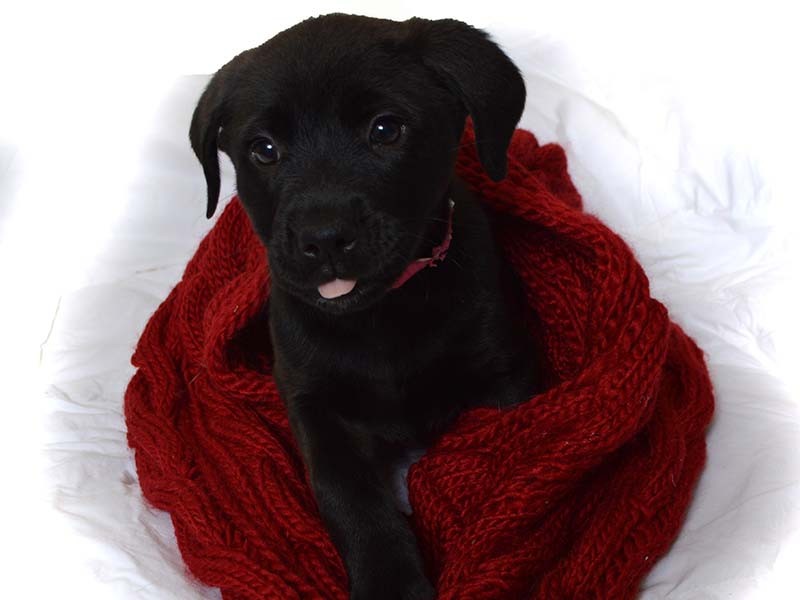 This holiday pup looks like they are ready to snuggle! But don't forget, pets are a lifelong commitment even when they are not adorable puppies anymore! (Photo credit: Humane Society of Northeast Georgia)
Contact Editor

The thought of the family waking up on Christmas morning to a puppy or kitten sitting under the tree makes a pretty picture.

But before the nostalgia sets in...is it really a good idea to buy or adopt a pet as a Christmas present?

"We have a strict no gift policy," said Threadgill. "We do adoption counseling with all of the potential adopters...and if we get any kind of indication that they're giving it as a gift, we deny the adoption immediately."

Threadgill said there are a couple of exceptions to this policy. One exception is a parent adopting a pet as a surprise for a child, since the pet will be primarily the adult's responsibility. Another is someone adopting a pet on behalf of another person who cannot be at the shelter, but HSNEGA staff still expect the new owner to give their consent over the phone.

However, even in these cases, there is still plenty to consider before adopting an animal.

"It's a lifelong commitment for the life of that animal and sometimes it can be up to 20 years for a cat or maybe sometimes a dog," said Threadgill. "I think people should equate it to having a child. We want to encourage as many adoptions as possible, obviously, but we also don't want the animal to end up abandoned, neglected or even returned to us."

Threadgill said she has not seen any evidence of a dogs or cats being returned to HSNEGA immediately after the holidays, like one might see on social media. Even worse, this time of year is when videos and posts pop up of animals dumped on the side of the road.

According to an article published by PETA, a shelter in North Dakota reported more than 700 animals are returned to shelters in the area after the holidays each year.

In the same article, a shelter in Texas reported more than 400 returned animals each year around the same time.

"A shelter is not an ideal environment for any animal, we try to make it as comfortable as we possibly can for them, but there's hundreds of animals in the building," said Threadgill. "All the smells, all the noises, they're stressed out...when you bring them from a quiet home to that situation it can totally change the animal."

Threadgill said if a family is dead set on adopting a dog or cat for Christmas, then they should consider the level of responsibility they are ready to take on at that time.

"When I was a kid, I really wanted a puppy and I swore up and down that I would help everyday with that puppy. And you know, that didn't really happen as it should have," said Threadgill. "So I might recommend an adult dog who's house trained, maybe a little bit older, calmer, or a little bit easier to deal with, and sometimes better trained."

The Humane Society of Northeast Georgia is open Tuesday through Sunday from noon until 6 p.m. The shelter will be closed on Christmas Day. A list of adoptable animals can be found here.