5 Things: What we learned from Week 12 of the high school football season 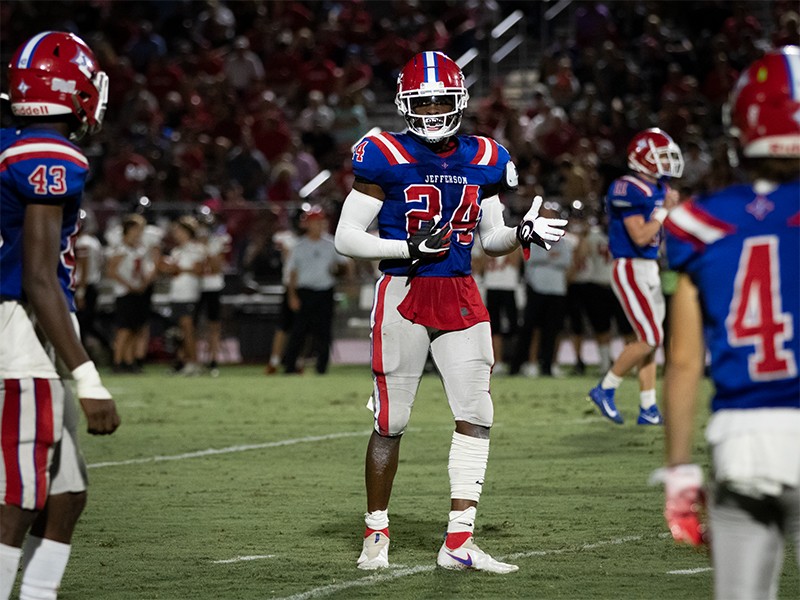 The 2021 high school football regular season is now complete and the final week brought some exciting and telling results around Northeast Georgia.

Here are five things we learned in Week 12:

Much of the conversation surrounding the Dawson County Tigers over the last several years has been about their high-powered passing attack. Senior quarterback Zach Holtzclaw led Class 3A in passing in 2020 and has been highly effective again this year. Receiver Bailey Dameron is leading 3A in receiving in 2021. On Friday night, with a home playoff game on the line against North Hall, Dawson County was able to hit some big plays in the passing game, but it turned out to be the defense who delivered the win. The unit held an effective North Hall offense to just 8 points. An offense that average over 300 yards rushing per game was held to under 100 and held off the scoreboard until the fourth quarter when Dawson County was already up 24-0. The defense added a safety in the fourth quarter for good measure, adding up to a 26-8 win. The Tigers will likely need that kind of defensive effort again this week as they host a talented Sandy Creek team in the first round of the playoffs, but their confidence has to be high after their performance in the regular season finale.

2. McWhorter's build has finally led Jackson County to the playoffs

Before the season, Jackson County head coach Rich McWhorter said his plan to build the Panthers' program was not designed to take place overnight. Instead, the program has built slowly, improving each year with a 3-7 record in McWhorter's first season of 2019, a 4-6 record in 2020 and a 5-5 record in 2021. This time, that improvement was just enough to get Jackson County back to the postseason for just the fifth time in school history and the first time since 2017. While the Panthers were unable to beat a much-improved Apalachee team on the road Friday night, falling in a 34-28 nail-biter, wins by Eastside and Loganville punched the team's playoff ticket. Games that they lost close in 2020 like Franklin County and Greenbrier were turned into wins this year and the Greenbrier win coupled with a surprising rout of Loganville proved to be the difference in making the postseason. They will enter as a number-four seed and will no doubt have a tough task in this first playoff appearance in four years, but the fact that they have reached this point shows that McWhorter's plan is working. If they can continue this improvement in the years to come, Jackson County may have some special seasons in its near future.

3. Cherokee Bluff is entering the playoffs on a strong note this time

2020 was a special season for Cherokee Bluff. The then-third year program started 9-0 and captured its first ever region championship. However, they did not enter the playoffs the way they wanted to. With the top seed already wrapped up, the Bears were blown out on their home field in the regular season finale last year by White County. While they were able to win their first ever playoff game the following week, it was not the ending to the regular season that the Bears had envisioned. This year, they found themselves in the exact same situation. After winning their second straight region title with a thrilling win at North Hall, Cherokee Bluff once again squared off with White County in a game that had no impact on playoff seeding to end the schedule. This time, they ended exactly how they wanted to as they routed the Warriors 30-0 in Cleveland. Will that strong finish to the regular season be foreshadowing for a bigger postseason run in 2021? We will find out soon.

4. Buford dominating with shock and awe

If your team hasn't had to play Buford in the past month and a half, consider yourself lucky. The Wolves have been a buzzsaw of epic proportions since entering Region 8-6A play. While they were already ranked number one in the state after their non-region slate, they had battled through some tough contests with powerhouses like North Cobb and Chaminade-Madonna (FL). Once they entered region play, however, they started pummeling teams. The defense didn't allow a point until the fourth quarter of their final region game, a 42-7 rout of cross-county foe Dacula. The offense, while sometimes not perfect, has shown a big play ability that can put teams away in the opening minutes. That was the case in the region title game Friday night against the Falcons. Senior quarterback Ashton Daniels threw a 64 yard touchdown pass a caught one on a trick play for a 40-yard score. The Wolves also blocked a punt and returned it for a touchdown. Before the midway point of the second quarter, Dacula was already down 21-0. If anyone hopes to beat this Buford team, they'll have to stop them from exploding early like they did Friday night.

5. Jefferson getting back into shape ahead of postseason run

If there was any question about Jefferson's ability to rebound from a gut-wrenching 11-6 loss to North Oconee in the Region 8-4A Championship game two weeks ago, those mumblings got a lot quieter after Friday night. The Dragons blew out Madison County 49-6 at Memorial Stadium to wrap up their 2021 regular season at 9-1. While they will not enter as a number one seed, this is still a team that Class 4A should have a healthy fear for. Most of Jefferson's late-season struggles can be attributed to a number of key injuries, with the most notable being to five-star athlete Malaki Starks and star running backs Sammy Brown and Jordan Perry. Perry returned to the lineup a few weeks ago and Starks finally looked to be back to full strength Friday night. He scored two touchdowns in the opening minutes of the game and while he didn't put up huge numbers on the ground, his return was also felt on the defensive side of the ball where he helped Jefferson hold Madison County to just 18 yards of total offense. If the Dragons can indeed get fully healthy at some point in this postseason run, they will still be a force that will be tough to handle for any team in the bracket.