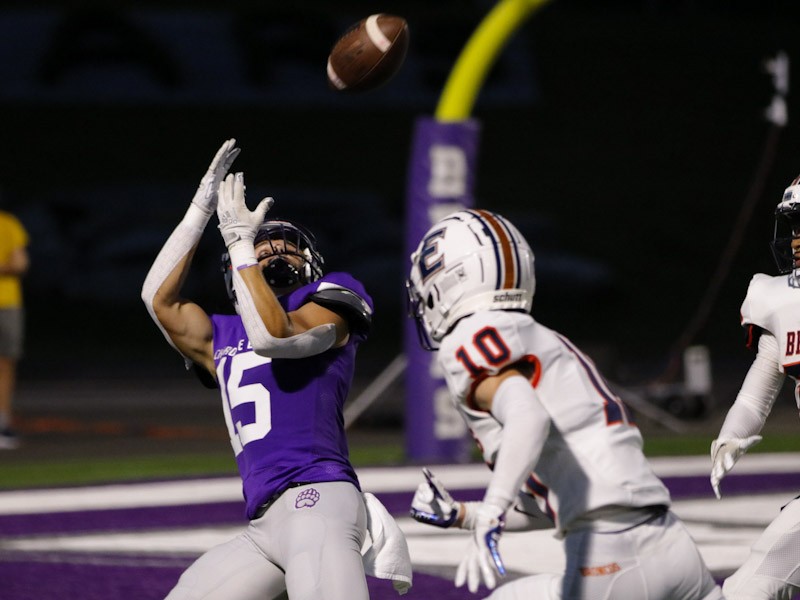 Max Eubanks (15) had 5 catches for 99 yards and 1 TD to help lead Cherokee Bluff to a 30-0 win over White County on Friday in both teams' regular season finales.
Photo/Seth Chapman
Contact Editor

Call it what you will. It didn’t matter one way or another to Cherokee Bluff coach Tommy Jones.

Jones’s Region 7-3A champion Bears closed out the regular season Friday night with a dominating 30-0 win over White County at Warriors Stadium.

It was more than just a win to send the Bears (10-0, 6-0 Region 7-3A) into the playoffs on a high note. It gave them the program’s first-ever unbeaten regular season and the first by any Hall County team since Gainesville in 2009.

“The most remarkable thing is that these seniors went from 0-10 to 10-0 in four years,” Jones said. “It shows a lot about their perseverance and what kind of kids they are. I couldn’t be more proud of them.”

Bluff now will get prepared to take on Greater Atlanta Christian, a notorious pain in the side of Hall County teams, in the first round of the Class 3A playoffs next week at home.

“This was really more about just being the next game and having momentum heading into the playoffs,” Jones said. “We didn’t really worry about that other stuff.”

Cherokee Bluff faced the same scenario almost exactly one year ago, but the Warriors (4-6, 3-3 Region 7-3A) pulled off a 48-7 rout in Flowery Branch to deny the Bears a perfect regular season in 2020.

And early on, it looked like the Warriors were ready to do it again. Five plays in Darius Cannon took a short Tripp Nix pass 51 yards to the Bluff one-yard line, but a huge block-in-the-back penalty nullified the big play and White County was forced to punt.

Penalties proved to be a huge factor for White County, which finished with 13 for 113 yards. Three offensive plays of 20 or more yards were called back. Several others forced the Warriors into third and extremely long situations against a Bears defense that came in fifth in Class 3A allowing just 9.8 points/game on the season.

After surviving the Warriors near quick strike, it took the Bears offense, which came in as the No. 1 unit in Class 3A (415, 46.1 ppg), just three plays to grab the lead. After two Jayquan Smith runs, Marlion Jackson took a jet sweep around the right side 55 yards for a score and a 7-0 lead.

The two teams then traded punts and turnovers into the second quarter before the Bears struck again. After a 22-yard run by Brayden Nance to the Warriors 28, Smith capped a short 48-yard drive with an eight-yard TD run for a 14-0 with just over 7 minutes left in the half.

The first half ended with the Bears driving to the Warriors 17 on a 24-yard pass from Sebastian Irons to Jhace Justice as time expired. The third quarter began almost the same way.

After White County just missed on recovering an onside kick to open the second half, Irons connected with Max Eubanks for a 57-yard pass to the White County six on the first play. Two plays later, Smith plunged in for a four-yard touchdown run and a 21-0 lead.

Early in the fourth quarter, Irons and Nance connected on a 7-yard touchdown pass, and the Bears capped the shutout, their third of the season, with a sack of Nix in the end zone for a safety.

“Coach (Chris) Griffin and our defensive staff did a great job of putting together a great game plan,” Jones said. “You have to have a plan to try and slow down Cannon and (Silas) Mulligan, and I thought we did a good job of that.”

Bluff held White County to just 119 total yards for the game. Nix was just 12-of-22 for 51 yards, and Mulligan was held to under 40 yards on the ground. Cannon had 4 catches for just 11 yards receiving.

White County, however, is not done. The Warriors will be the No. 4 seed out of Region 7-3A and take on the Region 5-3A winner next week in the first round.