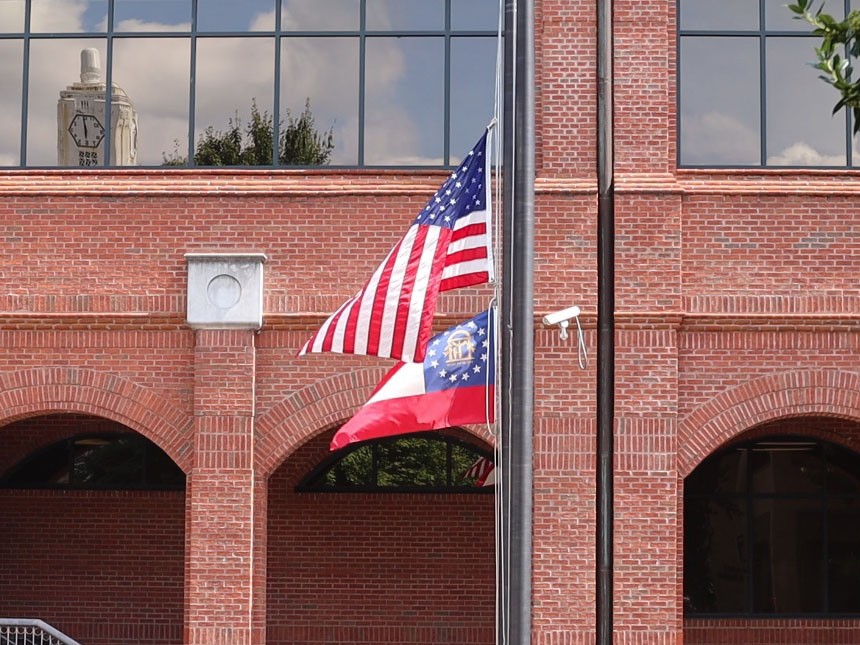 The American and Georgia flags flown at half staff outside of the City of Gainesville Administrative Building in honor of those who lost their lives in the 9/11 attacks.
Contact Editor

A normally somber day seems even more solemn this year.

Today marks nineteen years since the September 11, 2001 terroist attack on the World Trade Center in New York City. Typically local law enforcement and first responder agencies across the nation will hold a ceremony or memorial service to remember those who perished.

However, as the COVID-19 pandemic continues to force the cancellation of gatherings, many agencies, including local ones, have chosen to move their ceremonies to either a format that allows social distancing or cancel them altogether.

But this change does not mean that citizens are prevented from reflecting on the day in their own personal way. AccessWDUN reporter Lauren Hunter went to the Gainesville Square this afternoon to find out how local community members are remembering the tragic day.

Take for example Gainesville resident Marilou Wallace, who lived in New York City at the time of the attack and had a clear view of the World Trade Center.

Wallace said that she was walking back to her home after taking her kids to school when the first plane hit.

“I saw the first plane hit, which was a huge fireball,” said Wallace. “And then I saw this plane coming that looked kind of sinister…it was heading right for the building and then sort of banked and went in sort of sideways and created this huge explosion, which seemed even more devastating.”

Wallace said that the following weeks were occupied by hearing about neighbors and friends losing loved ones. She said that the whole experience left memories that she can never forget.

“I do think about the people that I know who lost people and I think about just the scene of that that never has left my memory,” said Wallace.

There are more stories and reflections from community members in the video above.