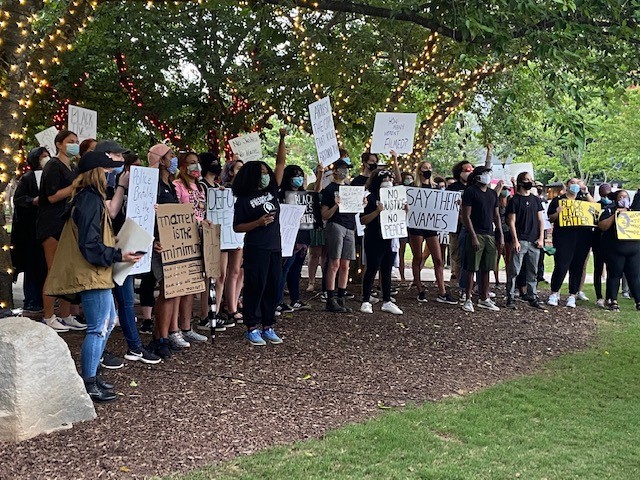 Demonstrators gather for the #WeAreNotDone protest on the Gainesville square Monday afternoon to protest police brutality and racism.
Contact Editor

Students who helped organize a peaceful demonstration in downtown Gainesville Monday afternoon said they hope it will help end racism they have experienced in the community.

“There’s been times when we’ve experienced racism at the grocery store,” said Alexus Cooper. “It has to be a thing made within our community and our area that you can’t continue to do this [racism] and we have to stand together and treat people with respect.”

The protest was organized by the Black Students of Gainesville under the name #WeAreNotDone “to stand in solidarity with the Black Lives Matter Movement…and push for reform and representation of our black community in Gainesville/Hall County,” according to a flyer.

The protest was also organized to honor the memories of victims of police brutality, including George Floyd, Ahmaud Arbery, Breonna Taylor and most recently Rayshard Brooks.

Protestors gathered at 2 Dog Cafe at 2:30 p.m. then marched down along Spring Street and stopped at the Gainesville square. Demonstrators chanted “No justice, no peace!” as they went, marching to the beat of a drummer and holding signs with messages including “Black Lives Matter” and “Shut down white supremacy”.

Once the demonstrators reached the square, they gathered around a white tent, chanted some more and listened to an African drum circle performance. Demonstrators then paused for a moment of silence lasting 8 minutes and forty six seconds, the same length of time as the video showing Floyd’s death in Minneapolis.

Following the moment of silence, several speakers took turns at the microphone advocating an end to racism in the community, calling for police reform and reassuring the crowd that Black Lives Matter is not just a trend but a movement.

One of those speakers was Brenau University President Anne Skleder, whose statement read in part, “I absolutely believe that our strength at Brenau—and in our home in Gainesville-- comes from our diversity, and we are continuing our endeavor to foster a community where every person is seen, heard and believed.”

While the university did not sponsor the protest, many of the protestors were Brenau students, and some Brenau staff had assisted with and helped market the protest.

Cooper said that the protest is one step some Brenau students are taking to demand more inclusivity for black students on campus. Some steps Cooper mentioned specifically include having a more inclusive administration, more events catered to the black community and more diverse training for staff members.

But Brenau senior Lathan Roberts said the Brenau community has been supportive during the students’ calls for change.

“We can speak and we’re heard, and knowing that we have the back up and the support of our community, of Brenau…there are students here that are behind us and that want to join us and march with us,” said Roberts.

Monday’s demonstration ended around 4:30 p.m. with another drum performance, but the work of the students is not over.

“We’ve talked about having different programming at orientation to get more culture and diversity within that process…we’ve been working with administration closely to make sure that they are being more inclusive,” said Charlene Hendricks, who is in the masters program at Brenau.