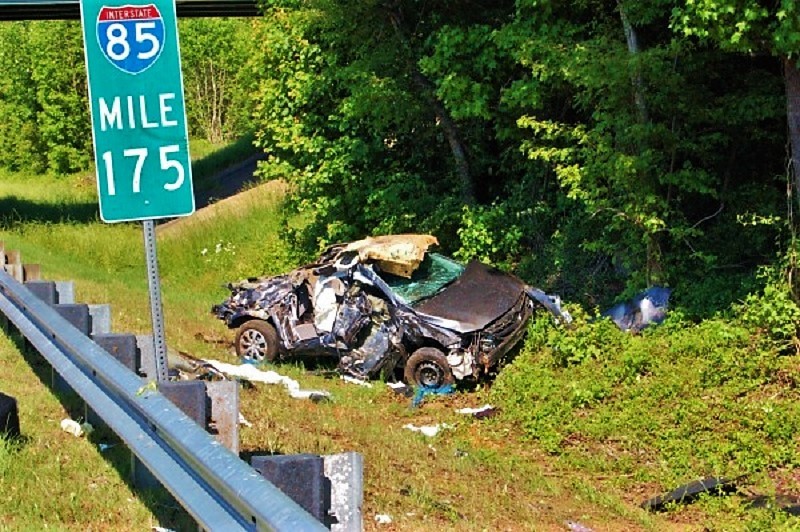 This 2013 crash that resulted from a PIT maneuver during a high-speed chase in Franklin County is at the core of arguments that will be heard Tuesday, Oct. 22, by the Supreme Court of Georgia.
File/Rob Moore
Contact Editor

The Supreme Court of Georgia is set to hear arguments in a case that’s rooted in Northeast Georgia.

In Calhoun v. The State, set to be heard during the 2 p.m. session on Tuesday, Oct. 22, the driver whose passenger died when his car flipped on I-85 in Lavonia while fleeing police is appealing his felony murder conviction and life prison sentence.

Thanquarius Rashawn Calhoun of McDonough, 21 at the time, was driving a 2012 Toyota Corolla northbound on Interstate 85 at a high rate of speed and refused to stop for deputies in Banks County, deputies in Franklin County and troopers from the Georgia State Patrol.

Two Franklin County deputies deployed spike strips at Exit 166 near Carnesville, hoping to slow or stop the vehicle. The fleeing driver managed to avoid them, and continued northbound at speeds of more than 100 mph.

"After contact with the GSP patrol car, the Toyota left the roadway on the east side, overturned numerous times, and struck a tree," said then-GSP spokesman Gordy Wright.

The wreck occurred at what locals call Gumlog Bridge, an overpass that connects the Gumlog community with Lavonia.

During a March 2015 trial, the jury found Calhoun guilty of felony murder, vehicular homicide, felony fleeing or attempting to elude a police officer, and a number of misdemeanors, including reckless driving, speeding, and driving with a suspended license – all in connection with the death of Marion Shore. Calhoun was sentenced to life in prison.

In April 2015, representing himself pro se, Calhoun filed a motion for new trial. After he was represented by an attorney, who filed a supplemental motion for new trial, the trial court held a hearing and denied the motion. Calhoun’s attorney then appealed to the state Supreme Court, asking the high court to remand the case for further hearing so Calhoun could raise grounds of ineffective assistance of trial counsel as grounds for reversing his convictions. The Supreme Court granted Calhoun’s motion and remanded the case to the trial court for consideration of the claims.

In March 2017, Calhoun’s attorney filed a subsequent motion for new trial adding the issue of ineffective assistance of counsel. The trial court held a hearing on the motion and denied it on April 1, 2019. Calhoun now appeals again to the state Supreme Court.

Calhoun’s attorneys for his appeal argue that the trial court erred by concluding that his trial attorney’s performance was not deficient, and that Calhoun did not establish a reasonable probability that, but for the attorney’s deficiencies, the outcome of his trial would have been different. The trial attorney for the then 21-year-old Calhoun “did next to nothing to investigate, prepare, or present Calhoun’s defense,” the attorneys argue in briefs. “Calhoun was deprived of his constitutional right to effective assistance of counsel and is serving a life sentence as a result. Trial counsel put up no evidence in defense and prepared neither himself nor the jury to address the key factual issue in the case: whether it was unreasonable – and therefore an intervening cause – for the Georgia State Patrol to use deadly force on an innocent passenger in Calhoun’s car by executing the Precision Immobilization Technique (“PIT”) maneuver at 111 miles per hour to stop Calhoun, whose only underlying offense was speeding. He cross-examined fewer than half of the State’s 13 witnesses. He did no research and asked for no expert assistance.”

“The evidence shows that Calhoun’s counsel performed his duties at trial in an objectively unreasonable way,” Calhoun’s attorneys argue. “The independent and cumulative effect of trial counsel’s errors, which fall well outside the broad range of reasonable professional conduct, severely prejudiced Calhoun, entitling him to a new trial.”

The State, represented by the district attorney’s and attorney general’s offices, argues that Calhoun received effective assistance of counsel from his trial attorney, and the Franklin County court’s decision should be upheld.

Calhoun’s trial attorney, who had more than 20 years of experience in practicing law and had tried many criminal cases, was not ineffective for failing to investigate the use of the PIT maneuver, hire an expert to testify about the maneuver, or request jury instructions on proximate or intervening cause, the State argues in court briefs.

The State argues that none of Calhoun’s other allegations of ineffective assistance of counsel has merit.

The chase covered 21 miles, passing through a construction zone at one point.