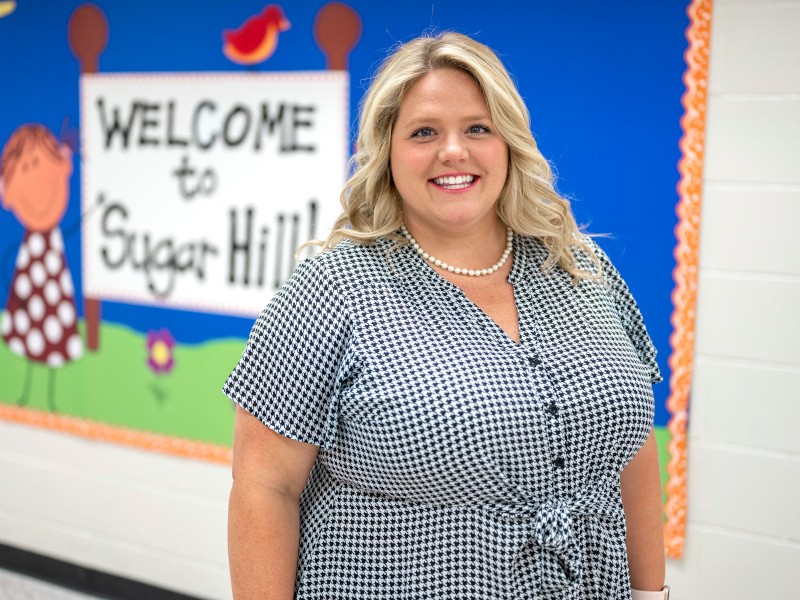 Katie Blum, a second-grade teacher at Sugar Hill Elementary School in Gwinnett County, has been named a finalist for Georgia's 2023 Teacher of the Year.

Blum said she was still in shock several days after hearing that she made the list of 10 finalists for the statewide nomination.

"It feels very surreal," Blum said. "When my principals came down last week in the middle of reader's workshop and asked me to come to the hallway, this was the last thing I ever expected. When they told me, I was just in pure shock. I was like, 'What? Me?'"

State School Superintendent Richard Woods released the list of the 10 finalists for this school year on March 7, 2022. A press release from the Georgia Department of Education said the finalists were chosen based on the strength of their essay responses. The winner of the award will be announced on April 30, 2022.

Blum said she felt like the nomination brought her career full circle.

"I've wanted to be a teacher my entire life," Blum said. "Ever since I was little and knew what school was, that's all I ever did ... Now that I'm finally a teacher, it's just so surreal that I've made it this far, and I honestly think the nomination to be the top 10 for Georgia's Teacher of the Year is more of a reflection on the education community that I've had support me."

Blum studied education at the University of Tennessee and completed a year-long student teaching internship at Grand Oaks Elementary near Knoxville. She said she was pulled to Gwinnett County because her fiance had gotten a job in the region. She was hired to teach at Sugar Hill Elementary for her first year of teaching in 2016, but she said things did not go as planned.

"I was actually displaced my first year, which means the student enrollment was lower than expected," Blum said. "I actually went to another school in Gwinnett County my first year, and it was Riverside Elementary ... I was devasted to have to leave my kindergarteners [at Sugar Hill Elementary] that I had been with for a month, but I ended up growing so much as a teacher and as a person that year."

Following her year at Riverside Elementary School, Blum returned to Sugar Hill Elementary, where she has taught for five years.

Blum said aside from her own day job as a teacher she is passionate about mentoring new teachers and student teachers.

"I would tell any new teacher or someone that's considering to be a teacher, that yes, teaching is hard work," Blum said. "However, no one will ever be able to tell you the amount of joy and the impact that you will get on yourself from being a teacher and helping students learn. I would tell them to make sure to take care of themselves because you can't pour from an empty cup."