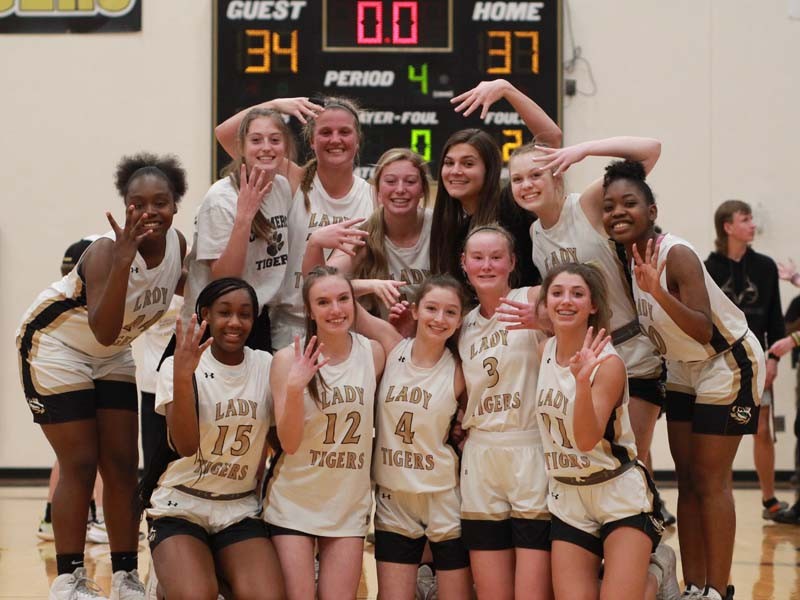 The Commerce girls pose after their quarterfinal win over Pelham on Wednesday. The Lady Tigers are into the semifinals for a second consecutive year and will play Hancock Central on Saturday at Georgia College for a shot at their first-ever championship game.
Photo/Brad Puckett (Commerce)
Contact Editor

COMMERCE — The Commerce girls apparently love a good party. And it doesn’t seem that you can keep them away even if they aren’t expected to attend.

For the second consecutive year, the Lady Tigers have crashed the Class A Public Final Four. In 2021, Commerce advanced to the semifinals for the first time since 1989. In 2022, they made program history with their first back-to-back semifinals after rallying to beat Pelham, 37-34, on Wednesday in the quarterfinals.

Commerce will take on Hancock Central in Saturday’s Final Four action at Valdosta State University. They are one of three Northeast Georgia-area teams to advance to the Final Four.

It is the second consecutive Final Four for the Lady Indians, who also are making history with back-to-back trips to the semifinals. Rabun County is back in the semifinals for the first time since 2017 when the Lady Wildcats lost in the championship game at Georgia Tech's McCamish Pavilion.

After witnessing last year’s playoff run up close, there was little doubt in the mind of Lady Tigers’ coach Brad Puckett about his 2022 squad. Not that he had much the first time around.

“Last year’s run was special, no doubt, because we hadn’t done it in so long,” Puckett said. “When you haven’t done something like that, as you get closer you wonder sometimes if it’s going to happen. That was special.”

However, Commerce sat at 1-9 at one point this season after a brutal non-region schedule and was just 7-13 before finding its groove over the past month. The Lady Tigers have won 7-of-their-last-8 after knocking off a Pelham squad that had been ranked as high as third during the season.

“This group may be more special. It stands alone now as the only ones to do it back-to-back seasons,” he said. “But you know, even when we were 1-9, you could see that this group had the potential to get back here. I never really doubted that we could get here but you also have to have some things go your way.”

If 32 years between Final Four runs was seen as a long time, the Lady Tigers (14-14) have never advanced to the championship game in their history.

They face a Hancock Central squad (17-3) that also has never been to the state title game and is in the semifinals for the first time since 1997. But the Lady Bulldogs come in riding a 15-game win streak after taking out No. 1-ranked Montgomery County in the quarterfinals on the road, 58-56. They beat No. 10 Bryan County 56-48 in the second round.

“They are a great team and it will be another challenge for us,” Puckett said. “But they are very similar in what they do to the last two teams we have faced (Clinch County and Pelham) so we feel very good about our chances. The key for us over the past month has been our focus on the defensive end. We stopped worrying about the offense and focused on being better defensively and that has paid off for us.”

Commerce is giving up a playoff-low -- across all classifications -- 33.3 points/game so far in the postseason.

(Check below for the day and times of the Final Four matchups.)