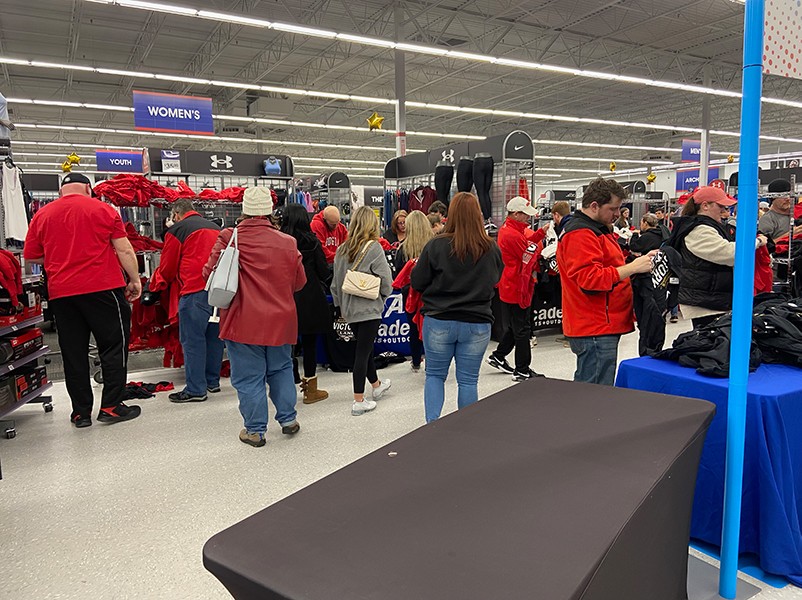 This photo was taken inside of Academy Sports + Outdoors shortly after the conclusion of Tuesday night's College Football National Championship game. University of Georgia football fans packed the store to buy new merchandise with National Champions printed on it.
Contact Editor

Some cheered. Some yelled. Many chanted, "Go Dawgs!"

"I was here and you couldn't get in the place!" said Judie Crawford, a Braselton resident who returned to the store around 2 p.m. Tuesday to look for more gear. "I got in and within an hour they were out of the sweatshirts, so I bought five hats, five shirts, five stickers...I spent over $300 and it was well worth it."

Indeed, Academy staff had their hands full with the Dawgs fans that crammed into the store shortly after midnight. Most of the store resembled a Black Friday sale, with shoppers cramming the front where the merchandise was displayed and creating checkout lines that stretched halfway across the store.

Despite the early hour, these die-hard Bulldog fans were cheerful and celebrated by calling out chants known to everyone who has ever stepped foot in Sanford Stadium. Around 1 a.m., an Academy employee led the crowd in the "Calling the Dawgs" chant over the store's intercom.

The enthusiasm and sales lasted well into the afternoon at the store on Dawsonville Highway. Marietta Martin, a Commerce native, said she was there to buy shirts for her entire family.

"I came to buy my whole family the red Georgia National Championship shirts," she said.

Monday night's victory was the first National Championship win for the University of Georgia since 1980. The Bulldogs defeated Southeastern Conference rival Alabama for a final score of 33-18.

For Bill McKiney, who lives in Gainesville, the 1980 championship was certainly a reason to celebrate. But this year's title was extra special because he could share it with family.

"I still get excited about the Georgia Bulldogs and my family is watching the game in Colorado, they're watching from Dahlonega, Georgia...to share that with your family, now grown children and almost grown grandchildren, it's better this year," said McKiney.

McKiney said he went shopping at Academy Tuesday afternoon to buy some shirts for his grandchildren. Before he left, he let out a "Go Dawgs!"

To hear more from local fans about the UGA victory, click the video above.