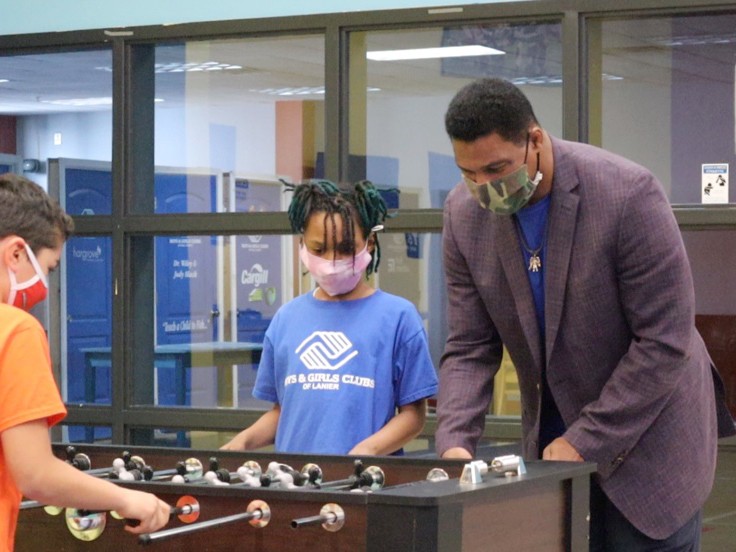 Legendary athlete Herschel Walker spent some time with members of the Boys and Girls Clubs of Lanier following his presentation of the keynote speech for the non-profit's annual Be Great Gala. (Photo credit: Lauren Hunter)
Contact Editor

“Never, never, never give up,” he said. “Sometimes it’s easy to quit, but if you quit today then you’re gonna quit tomorrow.”

Walker gave remarks following his presentation as the keynote speaker for the Boys and Girls Clubs of Lanier’s virtual Be Great Gala, which aired at noon today. The annual event celebrates the non-profit’s Futures for Kids Campaign, which aims to provide youth with the resources they need following their high school graduation.

“It’s so, so important the things that they’re doing here in Gainesville at the Boys and Girls Clubs,” said Walker. “The things they’ve done for some of the kids here is absolutely important…because kids are our future.”

Walker shared his struggles as a kid to illustrate that one’s starting in place in life doesn’t have to define their future. He said that he was born with a speech impediment, struggled with his weight and was bullied.

But he said that a turning point in his life came after he was severely bullied on the last day of school in eighth grade.

Walker said that from that day on he made it his goal to succeed at whatever he did, and to work as hard as he needed to work to achieve his goals. He said that he encourages the youth at the Boys and Girls Clubs of Lanier and beyond to have the same mindset.

“I want all the kids in Georgia and all around the country to realize that Herschel Walker is nothing special,” he said. “I believe in working hard and I believe in not getting anything…I want kids to realize that you can do whatever you want to do but be good at it.”

Walker added that this same mentality is applicable even during a difficult time, such as the COVID-19 pandemic.

“You gotta look up to go up. Things always through these curveballs at ya but I can promise you if you stay at the plate, sooner or later you’re gonna hit something,” said Walker. “The pandemic is just a blip in your whole life, don’t let it fool you, don’t let it control you.”

Walker also shared that a large contributor to his strength and success has been his strong Christian faith. A manifestation of this faith is the King James Bible that he carries everywhere with him- a gift from his mother before he left for college.

“I have it today, I’ve carried that Bible with me forever. Because I don’t go out, I don’t go to bars or drink, never tasted beer, never had a drug…I was by myself a lot [in college], but I really wasn’t because I had Jesus with me like my mom told me,” he said. “I tell kids this, He may not come when you want him, but Jesus will come on time.”

Other speakers at the Be Great Gala included BGCL CEO Steven Mickens and 2020 Youth of the Year Jonlyn Forest. Mickens spoke of the BGCL’s continued efforts to support youth during a trying year, while Forest focused on the positive impact that the non-profit has made on her own life.

The event also recognized the lives and contributions of former board members Phillip Sartain and Gene Marlow, both of whom recently passed away.

The virtual event is available in its entirety at https://www.boysgirlsclubs.com/virtual-gala/. More about the Boys and Girls Clubs of Lanier is on their website.