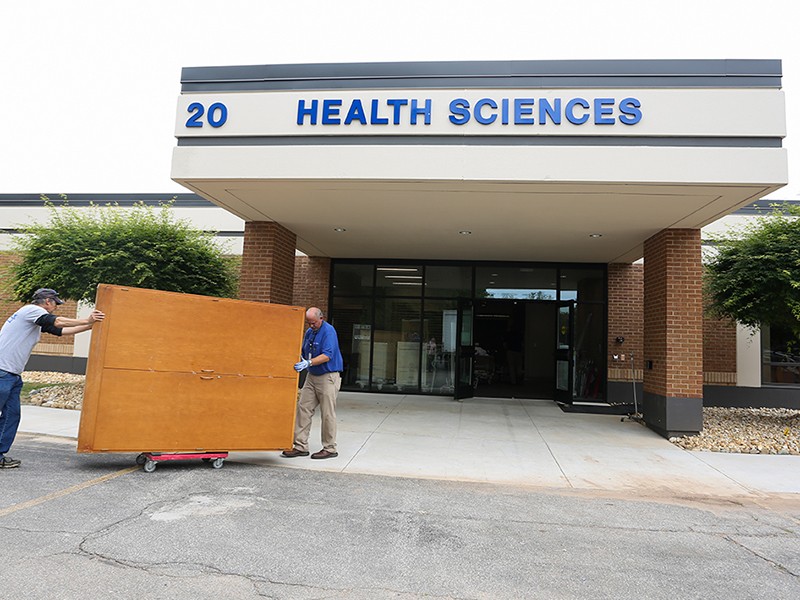 Staff with the University of North Georgia are in the process of moving furniture, equipment and other items into the renovated Health Sciences building. (Photo credit: Peggy Cozart)
Contact Editor

Beginning in August with the start of fall classes, the Department of Nursing at the University of North Georgia – Gainesville campus will have a new home.

University faculty and staff are in the process of moving furniture and equipment into the renovated health sciences building. The building was a part of Lanier Technical College before the college relocated to its current campus on Cornelia Highway.

The University of North Georgia acquired the property in 2018.

Richard Oates, vice president of the Gainesville campus of UNG, said the nursing program was among the first ones considered to fill the new buildings.

“We are developing the technology-assisted classes that are going to be there, which are larger classrooms than the traditional 24 to 35 seat classrooms,” said Oates. “Then it became very obvious, the need for increased speed skills labs, where the nursing students could go and practice what they’re learning in the classrooms to be critiqued by their professors.”

Oates added the renovated space includes simulation labs, which are set up just like a hospital room. Students can utilize these labs to practice their skills, just like they would in a hospital, on mannequins programmed to give a temperature, experience health emergencies and react similar to a human.

“If you walked into the facility, you would think that you were in a hospital room, and that is what we are trying to recreate with both our skills labs and our simulation labs,” said Oates.

While the Department of Nursing will comprise most of the building, Oates said there will also be space for Information Technologies on the lower floor. In addition, there are indoor spaces for eating and gathering between classes.

“We call it a casual learning space, where they will just hang out with their computers and get ready for their next class or work on projects associated with their previous classes,” said Oates. “We need areas where the magic of teaching and learning that we think about traditionally happening just in the classroom is now happening through both inside and outside of our buildings.”

The decision to take over Lanier Tech added between 450 to 600 additional parking spaces for faculty, staff and students, according to Oates. In addition to the Department of Nursing, plans are in place to relocate the Film and Digital Media Department and Institute for Environmental and Spatial Analysis to the remaining renovated buildings.

Oates said the university is in year three of a three-year funding renovation process used by the University System of Georgia.