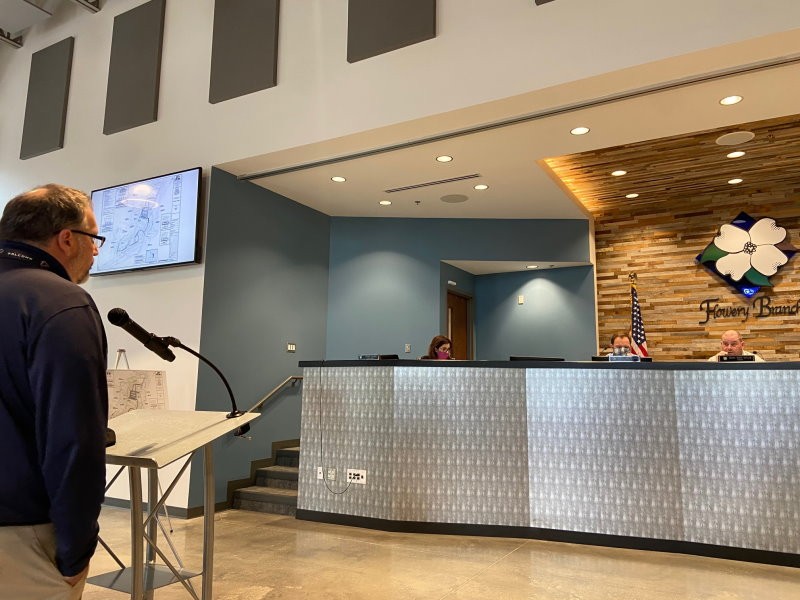 The Flowery Branch City Council got another look at a proposed residential development on Mulberry Street at their work session Thursday.

The proposal from Bill Stark is to rezone six tracts of land totaling more than 115 acres from their current Light Industrial designation to Multi-Family and construct 187 single-family detached homes and 140 townhomes. Several citizens had expressed concerns about the development when it was first presented on March 4, so developers brought early drafts of the plan to Thursday's meeting.

Councilman Christopher Mundy said he was pleased that the plans presented Thursday included a landscaping buffer, but he and Mayor Mike Miller both expressed concerns about the traffic affects on the surrounding area. The development would have access on both Mulberry Street as well as Phil Niekro Boulevard in an area that is close to its busy intersection with Atlanta Highway.

"You've got a railroad track, you've got more and more people coming into the area, we've had some growth on Phil Niekro and East Main Street, so we've started looking at traffic in that area," Mundy said. "The proximity of Mulberry spilling out onto Phil Niekro, being that close to an intersection that we're already kind of looking at concerns me with the timing."

City Planning Director Rich Atkinson said a traffic study has not been done yet for the project, but could be done before the council takes its final vote. He said that study could examine whether the development would warrant a traffic light or a turning lane on Phil Niekro Boulevard.

No one spoke against the project in the public comment portion of the meeting.

No vote was held Thursday. The first vote on the development is tentatively scheduled for the council's April 15 meeting. A final vote would then be held on May 20.