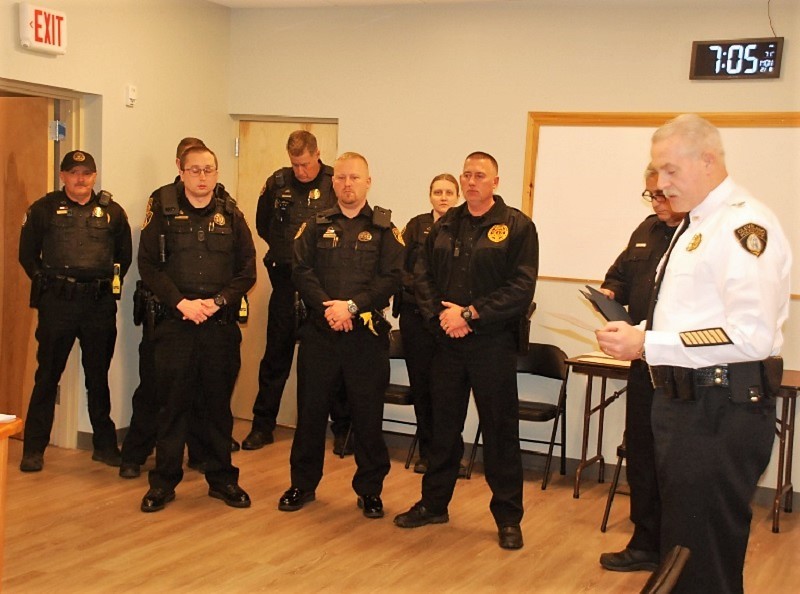 Cleveland Police Chief Jeff Shoemaker reads a letter of commendation for the three police officers and the firefighter who are credited with saving a woman's life Feb. 2.
Dean Dyer
Contact Editor

CLEVELAND – Three Cleveland police officers and a Cleveland firefighter were recognized last week for a lifesaving operation in the city earlier this month.

Cleveland Police Chief Jeff Shoemaker shared with the city council a letter of commendation for those involved.

“On Tuesday, Feb. 2, 2021, officers were dispatched to an overdose at an apartment complex,” Shoemaker said. “Dispatch advised that a subject was unresponsive and not breathing. Officer Denton Vaughan arrived first and observed a mother, in the parking area, attempting to give CPR to her adult daughter. The daughter’s face and neck had turned blue, and her fingers and toes were bluish-purple.

“The mother estimated that her daughter may have been down for about 30 minutes, in the near-freezing temperature,” Shoemaker said. “Officer Vaughan felt for a pulse, but could not locate one, and immediately took over CPR.

“Cpl. Brandon Wood arrived and assisted, while Sgt. Brandon Landress administered NARCAN,” Shoemaker said. “Officers continued CPR until Cleveland Firefighter Payton Cagle took over and then they assisted him with still no pulse detected for several more minutes. They noticed her hand move, and checked again, finally finding a pulse. The daughter then sat up and began to speak.”

At Monday night’s council meeting, Shoemaker told the council that “the quick, decisive actions and determination of these officers and this firefighter not only saved this young woman’s life but saved her mother and her children from an insufferable loss. Their actions reflect highly upon themselves, their profession, this department, and the City of Cleveland."

The letter of commendation was presented to each of the officers and a copy placed in their files.

“The quality of professionalism here is unmatched,” Shoemaker said.

The council and those attending the meeting gave the officers and the firefighter a standing ovation.