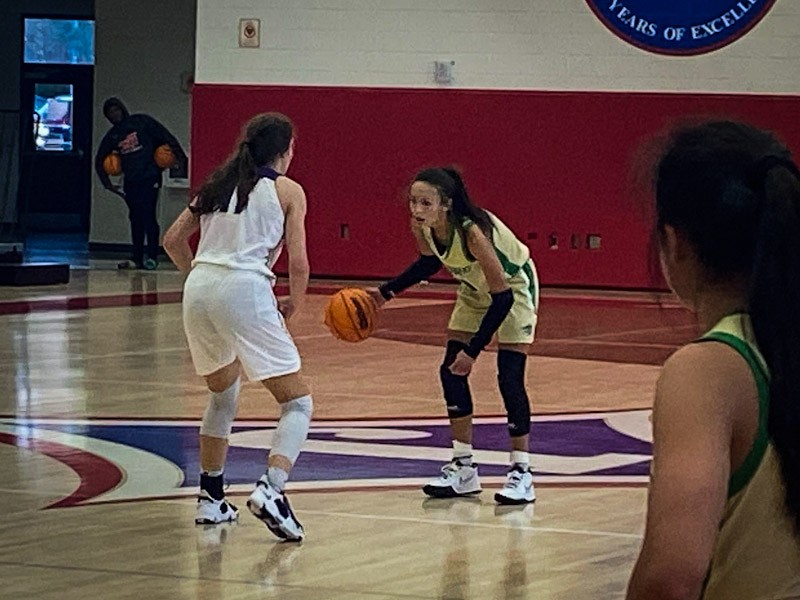 Buford's Ava Grace Watson (10) led the Lady Wolves with 21 points in a 56-39 win over Lumpkin County on Monday in the semifinals of the Jackson-EMC Tipoff Classic at The Arena in Jefferson.
Photo/Jeff Hart
Contact Editor

JEFFERSON — In an early-season test for both squads, Class 6A No. 3 Buford pulled away in the second half from Class 3A No. 1 Lumpkin County for a 56-39 win in the semifinals of the Jackson-EMC Tipoff Classic at The Arena in Jefferson.

The Lady Wolves (2-0) used a 12-0 run in the second half to grab their biggest lead of the game at the time, 50-32, as five different players scored. The big run was fueled by four Lady Indians’ turnovers.

“I thought we played with a lot of effort out there and we did some good things on defense at times,” Buford coach Gene Durden said. “That’s a very good and talented team we beat.”

The game was tight early on as both defenses stymied the offensive production. Buford led just 2-0 on a Tatum Ozment basket until Lumpkin’s Lexi Pierce gave them the lead at 3-2 on a 3-pointer with just under 6 minutes left in the first quarter.

The teams then traded the lead three more times until sophomore Ava Grace Watson gave the Lady Wolves a 10-9 lead they would not relinquish. Taylor Romano later hit a 3-pointer and Watson capped an 11-0 run to end the period for an 18-9 lead.

Buford’s defense continued to hound the Lady Indians forcing five more miscues to push the lead to 30-15 midway through the second. However, Pierce hit another trey, Mary Mullinax converted a fastbreak basket, and Kate Jackson hit 1-of-2 free throws to pull the Lady Indians to within 30-21.

Watson, however, hit two baskets in the final minute to give Buford a 34-21 halftime lead.

Lumpkin stormed out of the third quarter with an 11-4 run, capped by an Averie Jones 3-pointer, to get within 38-32 with just over two minutes left in the third quarter. But the Lady Wolves clamped down from there using its big second half run and then extending it in the final two minutes for the win.

Buford’s exterior defense hampered the Lumpkin shooters throughout, holding the Lady Indians to just 5-for-26 from 3-point range for the game.

“I was pleased with some things but we still have a lot of things to work on,” Durden said. “It’s still early in the season.”

Watson finished with 21 points, 17 in the first half, to lead Buford. Tamori Plantin added 10 points, several coming on stick-back baskets, and Ozment had 8 points for the Lady Wolves. Romano added 7 points.

Mullinax paced Lumpkin County with 11 points. Jones and Ciera Brooks each had 8 points and Pierce finished with 7 for the Lady Indians.

Lumpkin County was playing its first game since head coach David Dowse stepped down on Sunday.