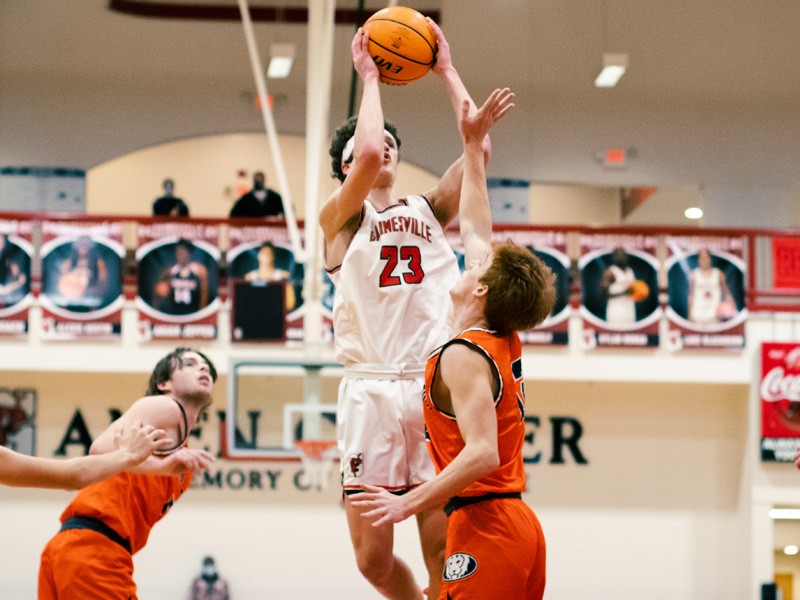 GAINESVILLE — It's what you expect on the hardwood in mid-January.

The battle for region tournament seeding was on full display Tuesday night as the Gainesville boys basketball team (13-6, 5-2 Region 6-7A) battled back from a 15-10 first-quarter deficit and deflected several West Forsyth's blows to escape with a 59-52 victory at home.

Robert Reisman led Gainesville with a game-high 25 points. Eli Pitts finished with 15. Russell Miller and Joe Wortman had 12 each for the Wolverines (8-10, 2-5 Region 6-7A).

The win solidified the Red Elephants' No. 2 spot in the Region 6-7A standings heading into a brutal three-game span starting Friday against Forsyth Central, followed by Denmark and South Forsyth. The top-two regular season teams get a bye to the semifinals of the region tournament and an automatic bid to the Class 7A tournament.

"Central has been playing well," Gainesville coach Chuck Graham said. "It's a challenge in our region every night. Now, for our guys, the challenge is, can you go on the road on a Friday night, focus and win another tough region ball game."

As for Tuesday night, the Red Elephants struggled in the opening eight minutes to find a bucket and allowed the Wolverines to control the boards, while falling behind 15-10.

"West has been playing a lot better and I think they came out with a lot of energy in the first quarter," Graham said. "They outrebounded us and got a lot of the 50-50 balls. In the second quarter, we started playing our style."

But West Forsyth wouldn't go away, outscoring Gainesville 8-4 in the final two minutes of the first half to close the gap, 32-27.

The Wolverines were pesky in the second half. Miller was a hand full in the post and an outside threat, scoring 7 points in the quarter, inching them to within three points, 34-31. But Luke Blackburn and Reisman answered and set the Red Elephants on a 5-0 spurt to extend the lead to 39-31.

The too-close-for-comfort moment and the turning point happened in the fourth quarter for Gainesville within a three-minute span. Two free throws from West's Miller and a 3-pointer from Caleb Lesch cut Gainesville's lead, 47-46 -- the closest the two had been since the second quarter.

Reisman, however, turned the corner for Gainesville, scoring five straight to stop the bleeding and give Gainesville a 52-46 advantage.

But, just like the first three quarters, the Wolverines had one more Hail Mary in them thanks to Max Smith, who converted a four-point play when he was fouled by Qua Coley shooting a 3-pointer to cut the lead, 52-50.

Reisman, Blackburn, Pitts and Dylan Bobga quickly tossed cold water on the comeback, outpacing the Wolverines 7-2 in the final 1:30.

"At one point, we had all seniors out there, especially, Rob, Eli, Dylan and Luke, they've been through the war, so they've seen it," Graham said. "Those guys made some plays at the end of the game."

West Forsyth stormed out to a 28-4 lead after the first quarter to pace the win over the Red Elephants on Tuesday.

The Wolverines full-court pressure forced 12 first-quarter turnovers, 15 for the half and 29 total, while running out to a 37-11 lead at the break.

Cayla Cowart led West Forsyth with 19 points, 10 in the first quarter, while Lauren Teasley and Alexis Austin paced the Red Elephants with 7 points each.