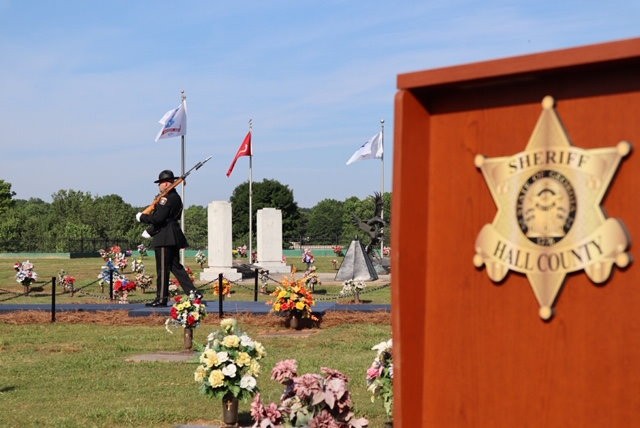 File photo from Memorial Day 2019
Contact Editor
The Hall County Sheriff's Office will continue a Memorial Day tradition this year, but the the annual Honor Guard vigil will move to a new location.
In the past, the 24-hour vigil had been conducted at Memorial Park Cemetery main campus in Gainesville, but the 2020 event will be held at the new veterans' section of Memorial Park South Cemetery in Flowery Branch.
"COVID-19 may have changed some things this year, but it will not stop our men and women from honoring those who have died while serving in the United States Armed Forces,” Hall County Sheriff Gerald Couch said in a press statement. “We remain committed to the memory of those who made the ultimate sacrifice for this country.”
Holding to the tradition, Sheriff’s Office Honor Guard sentries will replicate the maneuvers and steps conducted at the Tomb of the Unknown Soldier at Arlington National Cemetery. Honor Guard members from Hall County Fire Services and the Gainesville Police Department will also participate in the rotation.

Sentries will begin marching at 12 a.m. in the new veterans’ section of the cemetery on Monday, May 25. Each honor guard member will march for approximately 45 minutes at a time before formally handing off to the next.

Shortly before noon, Sheriff Couch is scheduled to speak, followed by a 21-gun salute. “To the Colors” will also be played as the American flag is raised.