Habersham County will use population formula for division of next SPLOST 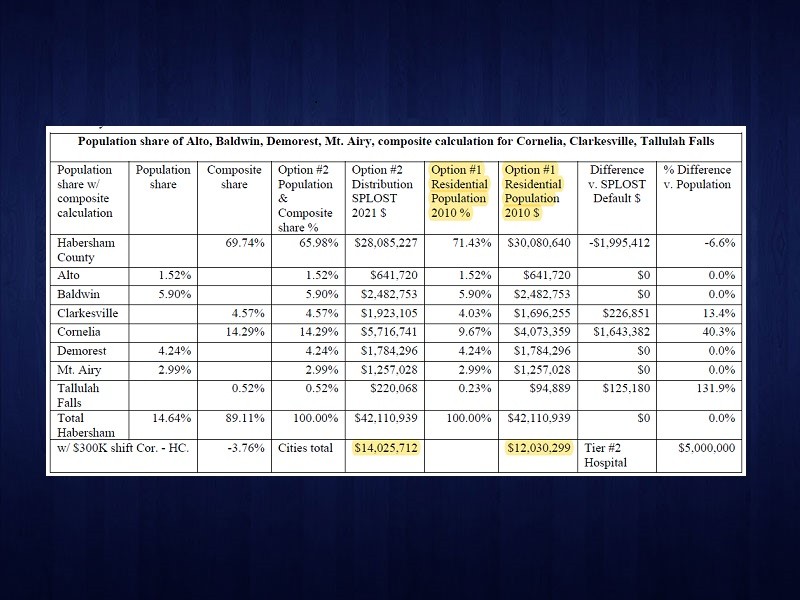 The Habersham County Commission will split revenue from the next Special Purpose Local Option Sales Tax, if approved by voters, based solely on a population formula.

That was the 3-2 decision made by the commission in a called meeting Monday afternoon, May 4.

The decision was not what three of the county’s seven municipalities wanted because it generates less money for them.

Commissioner Natalie Crawford initially made a motion to approve the composite share formula, which benefited Clarkesville, Cornelia and Tallulah Falls and did not affect Alto, Baldwin, Demorest or Mt. Airy at all. Her motion was seconded by Chairman Stacy Hall but failed 2-3.

Voters in Habersham County will vote on a SPLOST extension in November and, if approved by a majority of voters, the 1-cent tax would take effect when SPLOST VI expires in 2021 and would be known as SPLOST VII.

It would not be an additional penny on each dollar of goods purchased, but rather would replace the current penny collected in SPLOST VI.

Prior to the vote on the composite share formula failing, Cornelia Mayor John Borrow again appealed to the county commission to consider allowing everyone to “share in the growth”.

Commissioner Tim Stamey, whose district includes Batesville, said he understands tourists flock to Tallulah Gorge, but pointed out those same tourists fill Ga. 197 and Ga. 255 in the Batesville area on weekends, and visit Panther Creek and other scenic areas not inside city limits.

Estimates for SPLOST VII proceeds are based on 3% anticipated annual growth after removing $5 million for the Tier 2 hospital bond payments.

The sharing formula approved by the county commission now must be approved by city and town governments representing at least 50% of residents living inside the county's municipalities through an intergovernmental agreement.