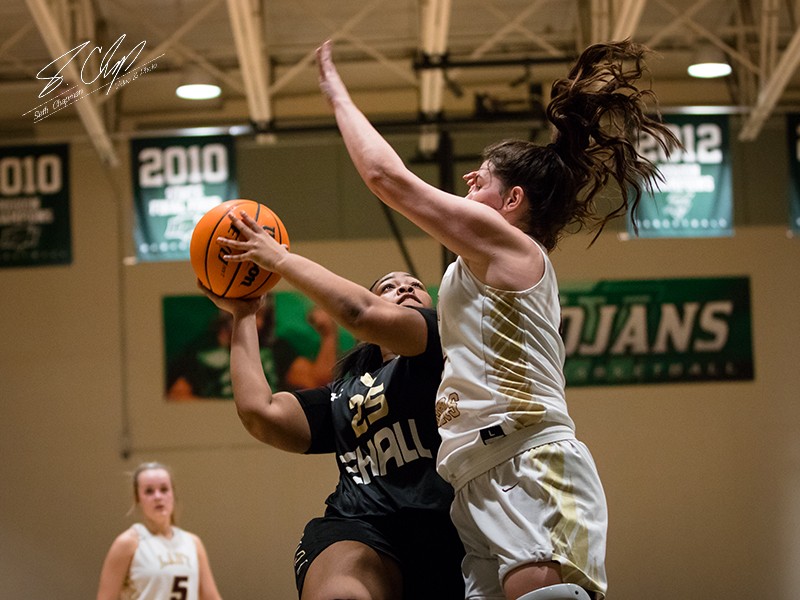 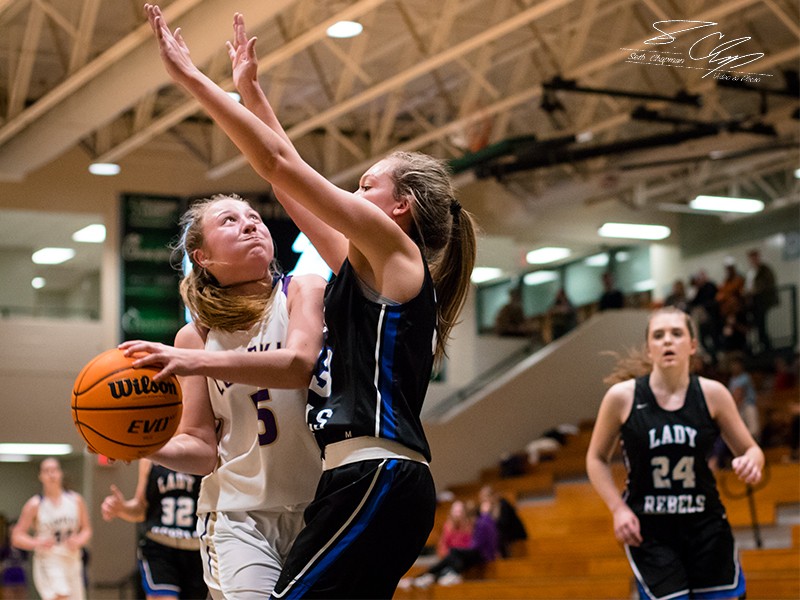 GAINESVILLE — On a night when the lower seeds in the Region 7-3A girls tournament were flexing their muscles, No. 2 seed North Hall made sure it would not become an upset victim.

North Hall led just 15-11 after the opening quarter but the decisive run was sparked by a steal and layup by Rylee McCall and capped by back-to-back 3-pointers from Grace Hollifield, who finished with 13 points.

It was a far cry from North Hall’s season finale last week, a 15-point loss to Lumpkin County where Hollifield managed just 5 points and the Lady Trojans defense was roughed up in the process. The North Hall defense gave up just 9 points over the second and third quarters combined while running out to a 40-20 advantage.

“Grace is a great player and basically we just want her to keep shooting no matter what,” North Hall coach Kristi House. “I really liked how we played defense, especially in the first half. The girls just willed it on the defensive end and I thought that is where we won the game.”

The win advanced the Lady Trojans (18-8) into Friday’s semifinals against Dawson County, which held off an East Hall upset bid on Wednesday.

“Both teams played pretty well and we’re familiar with each other so we’ll just try to get ready for them on Friday,” House said.

North Hall made sure the Lady Bears (5-21) would not stage a comeback extending its lead to 48-22 at one point in the fourth quarter. Cherokee Bluff closed out the game on a 9-1 run.

Dawson County’s Marlie Townley poured in 22 points, 16 in the second half, as the Lady Tigers held off a tenacious, upset-minded East Hall squad in the first round of the Region 7-3A tournament.

It was an especially satisfying win for the third-seeded Lady Tigers, who had lost 3 of their last 4 games coming into the tournament, including a 67-57 setback to the Lady Vikings last week in their season finale.

“We played a lot better this time than we did last week,” Dawson County coach Steve Sweat said. “I’m hoping this kind of a win at this time of the season will get us going.”

The win pushed the Lady Tigers (14-11) into Friday’s finals against North Hall.

It was a tight affair most of the way with Dawson County leading just 11-10 at the end of the first quarter and the teams went into the intermission tied at 21 after East Hall rallied from a 19-14 deficit..

Townley scored the next 12 points for Dawson County as they pounded the ball inside against the smaller Lady Vikings. Her final points of the run pulled Dawson County within 37-36 and her basket with 5:11 left gave the Lady Tigers a 41-39 lead lead, one they would not relinquish.

“She is so strong once she gets it you can’t get it from her,” Sweat said. “It took us a while to get her going. I thought we did a much better job in the second half of getting the ball to her.”

Once the Lady Tigers reclaimed the lead they were able to hold off a late comeback attempt hitting 6-of-8 free throws. East Hall did not go away as Audrey Griffin hit a 3-pointer to get the Lady Vikings within 47-44 with 48 seconds left. A Angel Rodriguez basket 20 seconds later kept it at 49-46.

But a Townley basket inside with 19 seconds left sealed the victory.

It was the Natalie Thomas show in the fourth quarter for the fifth-seeded Fannin County girls Wednesday in the first round of the Region 7-3A tournament.

Thomas hit three of her six 3-pointers in the final period and helped the Lady Rebels rally for a come-from-behind win over the fourth-seed Lady Indians.

It was a disappointing showing for a Lumpkin squad that had been hot over the final two weeks winning 4 of its last 5 games, including a win over the Lady Rebels. However, they still lead Class 3A in power rankings, as of Wednesday night, of teams not projected to make the state tournament.

The Lumpkin County girls also have not been to the postseason since 1991.

“We don’t want to back in that way but if we get the call we’ll go,” Lumpkin County coach David Dowse said. “The way we played at the end maybe we’re just not good enough yet (to make the state tournament).”

Lumpkin County (15-10) led most of the second half but went cold from the field and on the defensive end as Fannin County (17-9) outscored the Lady Indians 16-3 over the final eight minutes. Thomas’s three treys came while Lumpkin County, who took a 42-39 lead into the final period, managed just one Kate Jackson free throw and a Makenzie Caldwell basket.

Thomas hit one to tie the game at 42, her second gave Fannin a 45-43 lead, and her third gave the Lady Rebels a 48-45 lead. Lumpkin never got closer as Fannin hit 7-of-10 free throws over the next two minutes to pull away for the final score.

“The disappointing thing is that we went more cold on the defensive end in the fourth quarter,” Dowse said. “We told them the season was on the line and that if they want it to go get it. Fannin just wanted it more, it seemed to me. We’ll just have to wait to see what happens.”

The Lady Indians scored 20 of their 45 points in the second quarter but Isabel Davenport also picked up three fouls in a two minute stretch just before the half. The offense never got untracked after that as Davenport finished with just 9 points before fouling out late.

But the Lady Indians finally found their stroke. A 3-pointer by Lexi Pierce, then a Pierce dish to Davenport, and a Pierce free throw tied the game at 16. Lumpkin County took its first lead at 19-16 on a Jackson 3-pointer with 4:12 left in the half.

The Lady Rebels reclaimed the lead 21-19 on a three-point play from Becca Ledford but Lumpkin answered with a Madisyn Echols basket and a 3-pointer by Caldwell for a 24-21 lead. Fannin tied the game at 24 on a three-point play, which also was Davenport’s third foul in under two minutes.

But Lumpkin eventually took a 28-26 into halftime.

Thomas finished with 19 points and Ledford had 15 for Fannin County.