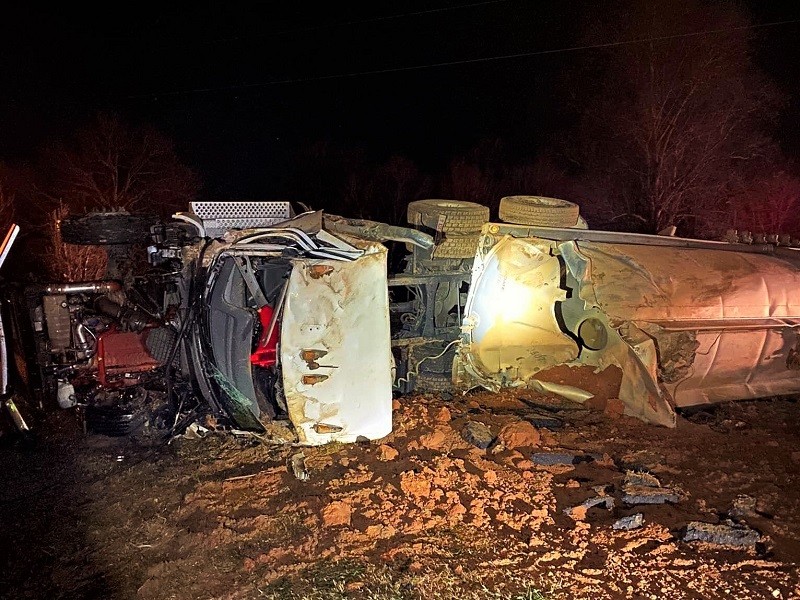 The Georgia State Patrol says a Gillsville man was distracted when the tanker truck he was driving went out of control and overturned on Ga. 15/U.S. 441 near Homer just before 8:30 p.m. on Christmas, spilling 4,000 gallons of gasoline.
Contact Editor

The driver of a gasoline tanker that crashed on U.S. 441/Ga. 15 in Banks County on Christmas was distracted at the time, according to the Georgia State Patrol.

Walter Catledge, 55, of Gillsville was driving a 2019 Kenworth semi truck northbound on Ga. 15/U.S. 441 when the driver failed to maintain his lane and traveled off the roadway, said Cpl. B.D. Taylor of Georgia State Patrol Post 6 in Gainesville. “The vehicle overturned, losing its cargo. The report does advise that the driver was distracted at the time of the crash.”

“Upon arrival, units found a single-vehicle accident, a gasoline tanker, that had left the roadway and rolled over in the drainage ditch along Highway 441,” said Banks County Fire/EMS Chief Steve Nichols. “Highway 441, both northbound and southbound, was shut down during the entire operation. The tanker was hauling 9,000 gallons of gasoline and ruptured during the accident.”

Four homes in the immediate area were evacuated due to the large gasoline spill.

“A total of 4,000 gallons was discharged and was running down the drainage system along Highway 441,” Nichols said.

Catledge was treated on the scene and transported to Piedmont Athens Regional Medical Center, according to Taylor.

Nichols said Catledge was in stable condition with minor injuries.

Fire personnel diked the runoff in three directions, and several cleanup companies were brought in to mitigate the spilled gasoline and remove the hazard.

The road was reopened, and residents could return home by 4 a.m. Saturday.

Catledge was cited by GSP for failure to maintain lane, Taylor said.