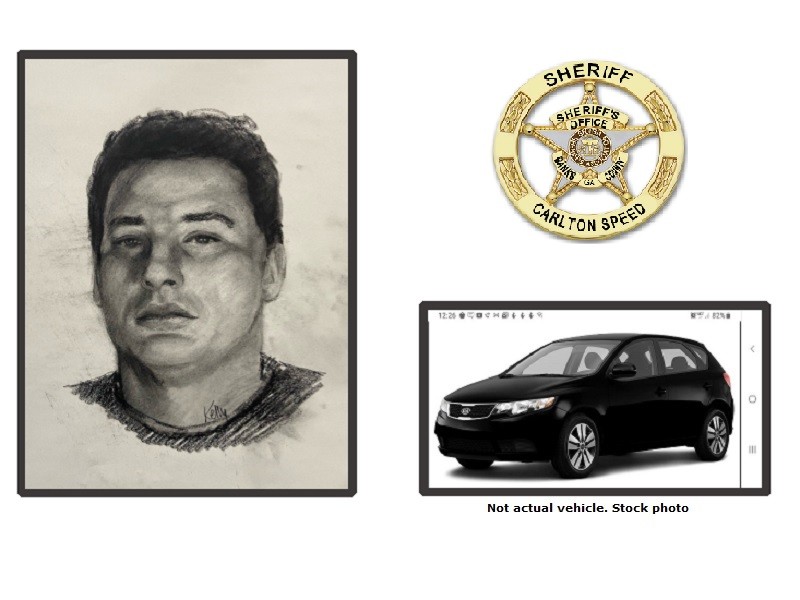 Banks County sheriff's investigators say the man represented by this composite sketch opened fire on a Toccoa woman's car from his black Kia Forte hatchback, like the one pictured.
Contact Editor

An unknown man intentionally shot a Toccoa woman's car as she drove on Ga. 63 near Ga. 51 Friday afternoon and Banks County sheriff’s investigators want the public to help them identify him.

The 31-year-old victim, who was not hurt, was traveling north on Ga. 63 about 5 p.m. and passed a slower vehicle, the offender, said Banks County Sheriff’s Maj. Carissa McFaddin.

When the victim encountered slower traffic near the intersection of Ga. 51 North, she said the offender pulled up to her driver side with the passenger window of his vehicle down and pointed a large black handgun at her about 5 p.m., the incident report states.

“The victim stated that as she let her car start to roll forward the offender fired the gun, which struck her back driver-side door above the window,” the report states.

The offender’s vehicle left the scene by turning east onto Ga. 51 North.

The victim identified the offender as a white male with heavy build, longer black hair, and facial hair.

The suspect’s vehicle is described as a 2013 to 2016 black Kia Forte hatchback with no window tint and a possible white sticker on the rear window on the driver side.

The partial license plate is BWY and has an In God We Trust sticker on the bottom.

Anyone with information about the incident or the identity of the driver of the black Kia Forte is asked to contact Investigator Way at (706) 677-2248 or by email at cway@bankscountysoga.org.