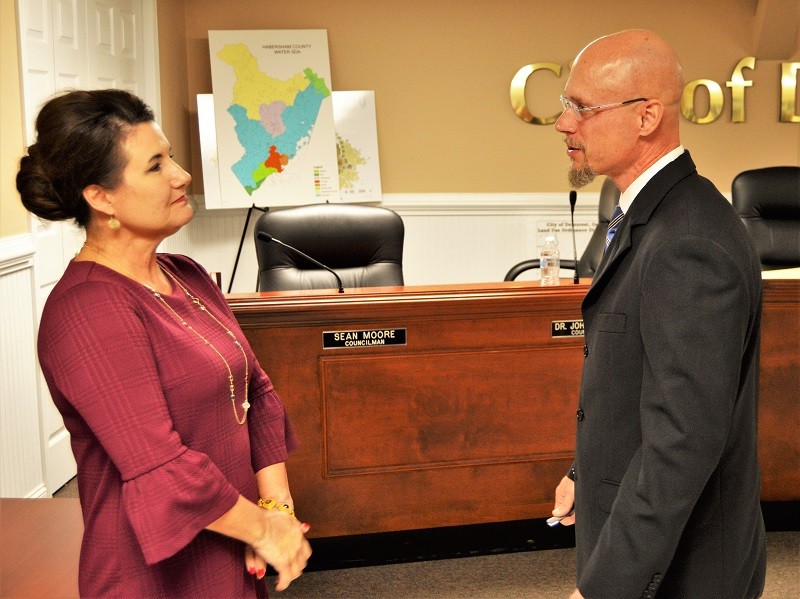 DEMOREST – The City of Demorest is under new management, officially at least.

“In February of 2019, we had a vacancy due to a resignation in our city manager position,” said Demorest Mayor Rick Austin. “Kim Simonds was our city clerk. She was quickly asked and tasked with filling in in an interim position for us. She spent the next 11 months working in that interim position.”

The city manager position is one of the annual appointments required by the city charter.

“It’s just home for me now,” Simonds said Tuesday night. “I’ve been there going on two years and love everybody in Demorest that I work with and we’re a team. I’m just looking forward to going straight ahead and keeping on.”

“It was a very necessary step for us as a city for her to step into that gap and she filled that gap wonderfully for us,” Austin said. “We purposely waited until the end of the year. Obviously we wanted to get through our big event, Fourth of July, which takes an awful lot of manpower and a lot of work to get that one pulled off, and then we wanted to wait until the end of the year to be able to make the appointment, because we knew that each appointment is annual.”

Simonds was named sole finalist for city manager on Dec. 17, and the city advertised that as required.

“Tonight was a formality,” Austin said. “We’re glad she was accepted. She’s done a wonderful job for us and really held us together at a time that could have been kind of dicey for us.”

Austin said he has no doubt Simonds will serve the city well now and in the future.

“I have complete and utter confidence in her abilities and look forward to continuing to work with her in the role as full-time city manager,” Austin said.