Football Highlights: BATTLE OF OAKWOOD (Johnson at West Hall) from AccessWDUN on Vimeo. 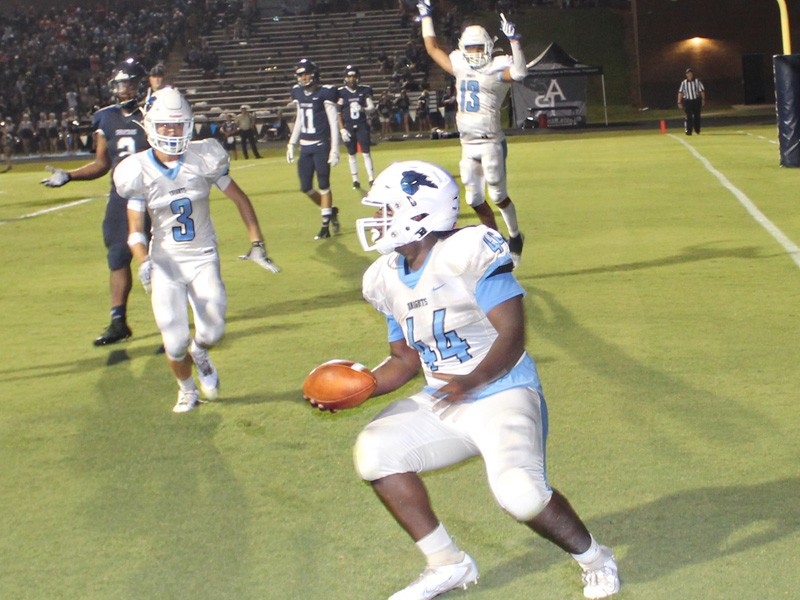 The Knights and Vashon Johnson celebrate after catching a touchdown pass in their 30-27 win over West Hall in the Battle of Oakwood.
Photo/Ethan Thurmond
Contact Editor

OAKWOOD — There must be something in the water that Stan Luttrell drinks.

Almost 16 years to the day that Luttrell was part of a Johnson staff that pulled off a 7-6 win over West Hall to snap a seven-game winless streak against their arch-rivals, Luttrell and the Knights did it again.

Senior kicker Steven Flores drilled a 38-yard field goal as time expired to give Johnson a thrilling and nerve-wracking 30-27 victory over West Hall Friday night at The Hot Gates to end a six-game skid against the Spartans.

“Just so proud of all the guys really,” said Luttrell, who was taking part in his first Battle of Oakwood since that 2003 win. “They didn’t give up when things started going wrong and they finished it. We were right at Steven’s range but as soon as he hit it I knew it was good.”

The kick for Johnson (2-0) capped a 15-play drive that ate up the final 8:09 of the game after West Hall (0-2) had rallied for 15 consecutive points in the fourth quarter to tie the game.

Flores admitted he was feeling some nerves after West Hall coach Krofton Montgomery called time out to try and ice him.

“Oh, I got nervous,” he said. “It was a big crowd and they were all looking at me. But my coaches were saying ‘it’s just another kick' so I just focused on that. It was a good snap, a good hold, and when I hit it I felt like it was good.

“It was just an amazing feeling when it went through. Unbelievable.”

While Flores’s kick will be the ultimate memory of the 2019 Battle of Oakwood, it was the Johnson lines of scrimmage that were the underlying stars of the game. The Knights offensive group pounded out 310 yards on the ground while the defense held the Spartans to 175 total yards of offense and just 81 on the ground.

“(Johnson) won the lines of scrimmage and that’s really where this game was won,” a frustrated Montgomery said afterward. “They did a great job of controlling the game. If you get beat upfront you’re going to lose. We got beat up.”

It was a second straight week for Montgomery watching what was expected to be an explosive offense sputter for much of the game. Penalties and turnovers hurt last week in a loss to Commerce. Two big fumbles and several ill-timed penalties plagued the Spartans against Johnson.

“We just couldn’t move the ball consistently,” Montgomery said. “That is something we’re going to have to fix. But our guys never quit when they got down by two scores and found a way to get back in the game. I was proud of how they put themselves in a position to win.”

Johnson led 14-6 at halftime and got the ball first to open the second half but a Jack Luttrell fumble, his third of the game, was recovered by West Hall's Talil Blackwell, his second recovery of the game, at the Knights 20. Three plays later Clayton Jenkins connected with Matthew Griffin on a 20-yard screen pass for a TD to cut the lead to 14-12 after a failed 2-point pass attempt.

The Knights extended the lead to 27-12 just three plays later. After a West Hall fumble, Luttrell outran the West Hall defense around left end for a 20-yard scoring run on the second play of the fourth quarter.

But the Spartans came storming back. Blackwell capped a 65-yard drive with a 7-yard TD run as he practically dragged the entire Johnson defense with him the final five yards. And after a Johnson fumble on the ensuing kickoff, Nick Sturm scored on a 1-yard run to cap a quick 17-yard drive when Jenkins connected with Rodrigo Lopez on the 2-point pass to tie the game at 27 with 8:09 left.

But the Spartans would not touch the ball again.

“We’re trying to make the games as physical as we can,” Luttrell said. “I thought we did a great job, especially on that last drive. I think this will help give our kids the confidence that they can compete if they keep working the way they have been.”

It was a defensive struggle most of the first half that was also helped by untimely penalties by the offenses. West Hall went three-and-out on its first possession while the Luttrell was stripped of the ball by Blackwell inside West Hall territory in their first drive.

The Spartans did breakthrough first when Solomon Riley capped a 70-yard drive with a 24-yard touchdown run with 5:03 left in the first quarter for a 6-0 lead after the extra point was blocked.

Johnson was stopped on downs each of its next two possessions but took advantage of a short West Hall punt and needed just two plays to grab the lead. Luttrell scampered 40 yards on an option keeper for a touchdown and a 7-6 Knights lead after a Flores PAT with 7:41 left in the half.

After the Johnson defense forced a fourth West Hall punt of the half, the Knights pulled off one of the biggest plays of the game when Justin Long executed a perfect fake punt for a 34-yard gain to the Spartans 34. A 30-yard Luttrell pass to Bullock got Johnson to the West Hall 4 and three plays later Luttrell found Vashon Johnson in the end zone for a score with 4 seconds left and an eventual 14-6 halftime lead.

Luttrell finished with 112 yards to lead the Johnson ground game. Bullock had 69 yards rushing and the big 30-yard catch. He also added over 100 yards of kick returns to post 200-plus all-purpose yards. Xzavior Ramsey had 88 yards rushing for the Knights.

Solomon Riley paced West Hall on the ground with 55 yards rushing and 38 yards receiving. Jenkins finished 12-of-22 for 94 yards and the one touchdown pass.