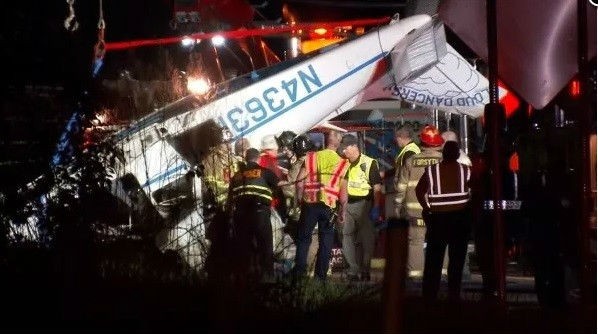 Federal investigators have concluded that a plane crash in April 2018 on Browns Bridge Road just west of Gainesville was caused by a partial engine failure.

The crash, which occurred near the Hall-Forsyth county as the pilot attempted an emergency landing on the road, killed the pilot and seriously injured his two passengers.  No one on the ground was injured, although two cars were struck by the plane before it plunged down an embankment and overturned.

As AccessWDUN reported about a month after the crash when the NTSB released its preliminary report on the incident, the two survivors told investigators they heard a loud "bang" and the windshield became covered with oil.   Several witnesses who were on the ground said "the plane's engine was sputtering, leaking fluid and trailing smoke."

The final report on the crash, which was published earlier this month, notes several incidents of internal damage to the engine, including damage to cylinders and the crankcase

The single-engine Pipe was owned by Flight School of Gwinnett, according to the report, and had left Briscoe Field in Lawrenceville about an hour before the crash.  The occupants of the plane included a licensed pilot who was in training to upgrade his rating, an instructor and a student pilot at the flight school who was "observing" the flight.  They were all from Gwinnett County.