FLOWERY BRANCH — Flowery Branch used a 16-3 third quarter to blow open a close game en route to a 55-40 win over Dawson County in a battle of ranked teams at the Flowery Branch gym.

Junior Ashlee Locke and freshman Keidra Young both recorded double-doubles for Flowery Branch. Locke poured in 15 points and had 12 rebounds while Young finished with 15 points and 11 rebounds. Shaina Kriews chipped in 13 points for the Falcons.

Sophia D'Oliveira led Dawson County with 13 points. Marlie Townley, Mariah Benson, and Kirklyn Porter all had 8 points each for the Tigers.

The Trojans improved to 2-0 on the season after a huge win over the Raiders.

North Hall exploded for 50 points in the first half to lead 50-29 by halftime. The Trojans took a 68-45 lead into the fourth quarter.

Lauren Swanson paced North Hall with 25 points and 7 rebounds. Grace Hollifield added 13 points and Ansley Smallwood and Maci Gillespie each had 11 points for the Trojans. Rylee McCall chipped in with 9 points

North Hall will travel to Chestatee on Thursday.

Kinsey Wilson poured in with 25 points and pulled down 12 rebounds to lead the Spartans to their first win of the season.
Angelica Mallak added 13 points and Cassidy Klekot grabbed 17 rebounds for West Hall (1-1).

Five players scored in double figures to lead the Lions to a win.

Lakeview exploded out of the gates running out to a 38-8 lead after the first quarter. The Lions led 59-21 at halftime.

Jackie Allen and Eliza Snyder both just missed out triple-doubles.

Ashyia Willis scored 24 points and Tate Walters had 19 to lead the Wolves past Eagles Landing at Buford Arena on Tuesday.

Dogs remain 4th in latest CFP rankings
The College Football Playoff rankings were unchanged at the top this week, with LSU first followed by Ohio State, Clemson and Georgia... 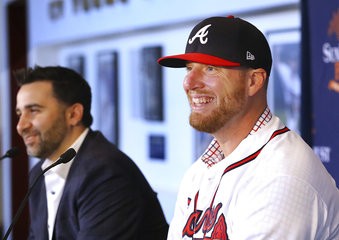 Will Smith celebrates return to home state with Braves
The Braves are not promising Will Smith the closer’s role. Smith isn’t complaining...
Sports

Girls basketball: Dawson County takes down 6A Alpharetta; Lakeview falls to 7A Roswell
The Dawson County girls picked up their first win of the season Saturday with a solid 72-53 win over Class 6A Alpharetta at home...
By AccessWDUN Staff

Girls basketball: GHS drops opener; LCA rallies for win
The Gainesville girls opened their season Friday night with a tough 63-51 loss to Forsyth Central on the road...
By AccessWDUN Staff