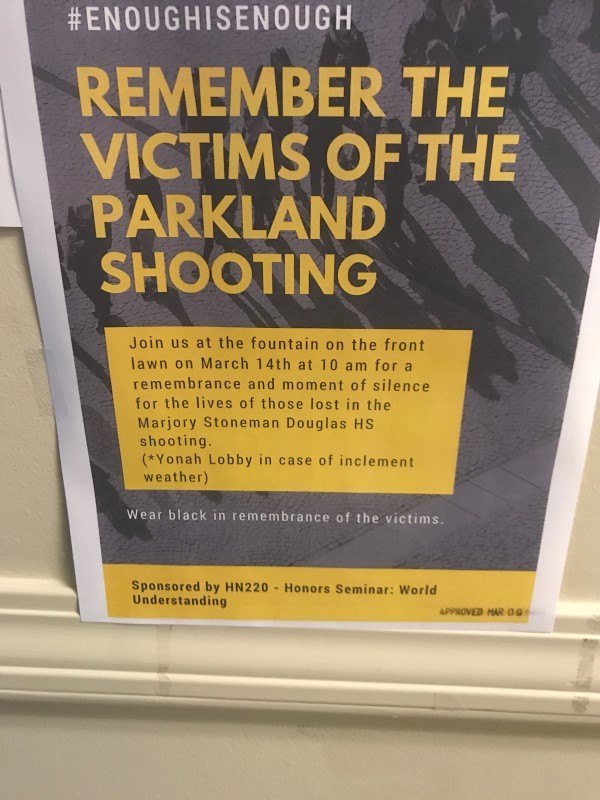 A flyer posted on the campus of Brenau University by a class looking to participate in Wednesday's National School Walkout
Contact Editor
School officials throughout Hall County say they are preparing for potential participants in the National School Walkout that some organizations are encouraging Wednesday across the country.
The walkout, which is being held in remembrance of the Valentine's Day shooting of a Florida High School that left 17 people dead, is being held at 10:00 a.m. and is supposed to last 17 minutes, one minute for each student killed in the massacre. It gained momentum from student organizations with aid from the Women's March Youth Empower group, which organized the Women's Marches last January.
Hall County Schools Superintendent Will Schofield said Monday that the school system had not heard any specific groups of students who have said they will participate in the event.
"We certainly haven't heard anything concrete," Schofield said. "Of course, with social media you hear that there are reports that certain students in certain schools think that they'd like to walk out. We're handling that on a school by school basis."
Schofield spoke after the county school board's Monday meeting. He said that school officials would not look to oppose the walkout demonstrations.
"We're going to continue to use common sense," Schofield said. "We certainly want to encourage students to have a voice to express their First Amendment rights."
He did say, however, that officials will keep an eye on any student leaving their school building during the day.
"There's a big difference between expressing your First Amendment right and skipping school. So if you go out to the parking lot, take off and go down to the Dairy Queen, you know, we're going to handle that the way that we always have. If you respectfully say we've got some things to say that affect us deeply, we're certainly going to take that seriously and keep kids safe and give them that opportunity," Schofield said.
Gainesville City Schools Superintendent Jeremy Williams had similar sentiments, saying in an email earlier this week that officials will work with students and the Gainesville Police.
In a Tuesday evening update, Williams said some students would be supporting the walkout.
"GHS and the student body successfully participated in the DACA walkout earlier this school year and expect the same outcome."
A class at Brenau University has announced that they will participate in the walkout, and they're encouraging other classes being held at that time to join the. The Honors Seminar: World Understanding course posted flyers encouraging other students to wear black and join them on the lawn in front of the campus' fountain.
Brenau University officials have not released an official stance on the demonstration.
While some students are planning to walk out of class, students at Lanier Christian Academy will use the moment for another purpose.

Al Gainey, president of the private school in Hall County, said students there requested to pray for 17 minutes beginning at 10 a.m.