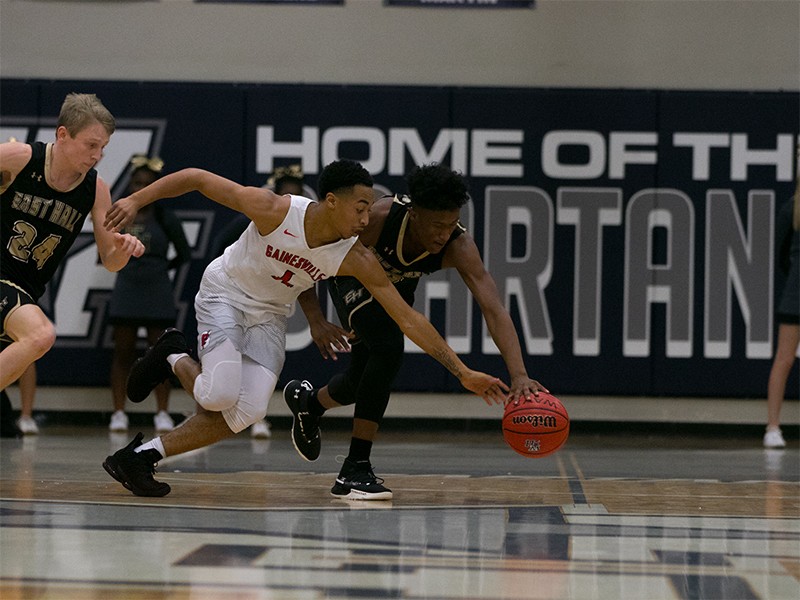 OAKWOOD — For Maurice Hector and the handful of remaining Gainesville seniors, Saturday night’s Lanierland Tournament final against arch-rival East Hall offered them a chance to show they were ready for the Big Time.

They answered the bell, dispatching the Vikings 70-62 to capture their third consecutive Lanierland trophy. The Red Elephants became the first team to win three straight titles since East Hall won six straight from 2002 to 2007.

Hector, like most of the Class of 2019 seniors, was used mainly in spot duty the past two seasons while the star-packed Red Elephants, who graduated seven, made a run to last year’s Class 6A state championship game. His six 3-pointers and game-high 18 points helped Gainesville (8-7) first chase down the Vikings in the first half and then pull away in the third quarter.

“I’ve been working on my shot a lot since last year and this group as a whole has just been working hard and trusting the process,” Hector said. “My shot just kind of finally came to me in the second quarter.”

“It took a while for us to see what we had and where they all fit,” Graham said. “They grew up on Friday with that win over Lakeview. Most of these kids did not see a lot of big minutes the last couple of years so for them to win a game like that was big. That helped them be able to answer the challenge (in the finals).

“I’m proud of Hector and all the seniors. They waited their turn the last two years. It’s great to see them contribute.”

East Hall (9-7) jumped out to a 7-2 lead in the first three minutes and led 15-8 after the first quarter. But the Vikings’ Jayvion Rucker picked up his third foul moments into the second quarter and Gainesville took advantage.

The Red Elephants used a 7-0 run, highlighted by a 3-pointer from Hector and a three-point play from Jordan Williams, to grab their first lead at 21-20. The Vikings’  T.J. Campbell reclaimed a 28-26 lead for East Hall with a pair of free throws but Robert Reisman’s 3-pointer with 30 seconds left in the half, moments after another trey from Hector, gave Gainesville a 29-28 lead and the Red Elephants never trailed again.

The third quarter was the real difference, however, as the East Hall offense collapsed under a quick Gainesville defensive pressure with 9 turnovers that led to 10 Gainesville points and an eventual 46-35 Gainesville lead on another Hector trey heading into the fourth quarter.

“Gainesville played very well,” East Hall coach Seth Thompson said. “I thought our defense was pretty good but they found the open man and hit some big 3-pointers. And just way too many turnovers in the third quarter. That’s probably where the game turned.”

Gainesville leading scorer Rafal Rubel, who was named the tournament MVP, was held in check by the Vikings managing just 12 points. But Rucker, East Hall’s leading scorer, fared even worse as he did not score until the final two minutes after Gainesville had built a 68-52 lead.

Williams and Datavious Buffington each finished with 9 points for Gainesville.

Campbell led East Hall with 15 points. Kylan Curry had 14 points and Aaron Thomas 11 for the Vikings. Rucker finished with 7 points, all in the final 2:04 of the game.