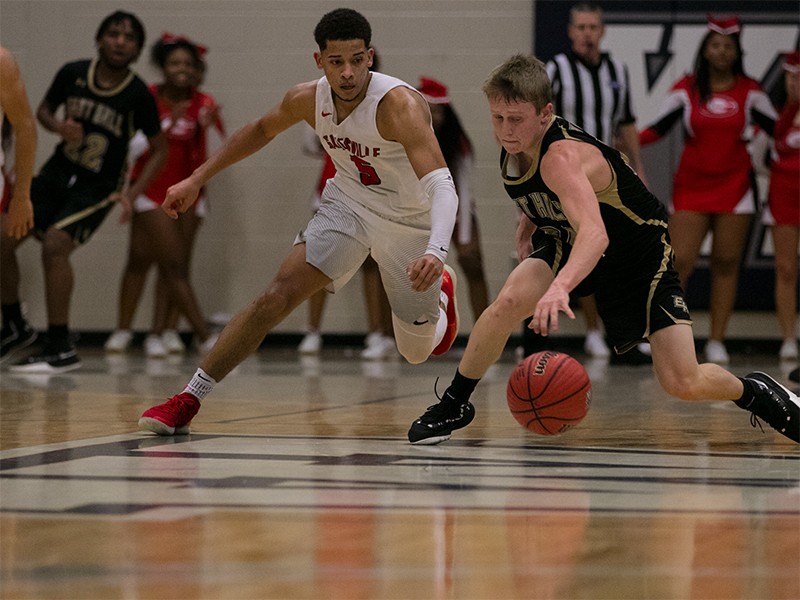 For both teams, it was a defense of their 2017 titles. The Lady Falcons have now won four straight Lanierland crowns and it was the third straight for the Red Elephants.

The Gainesville boys, behind a hot shooting night from senior Maurice Hector, held off arch-rival East Hall 70-62. The Red Elephants (8-7) fought off a hot start by the Vikings (9-7) to rally for the win. Hector drained six 3-pointers for his game-high 18 points, with each one either igniting a run or answering an East Hall spurt.

The Lady Falcons used a stifling defensive effort to beat North Hall 48-23 in the girls final. Flowery Branch blew open a close 10-6 game with a 34-6 run through the third quarter behind MVP Ashley Woodroffe and Ashley Scott. Woodroffe had 13 points while Scott finished with 15 to lead the Lady Falcons.

In other boys action, Lakeview Academy led from start to finish in a 74-44 win over North Hall for third place. The Trojans had cut a 10-point first half deficit to 27-23 by halftime but the Lions exploded in the third quarter outscoring North Hall 25-9 to put the game out of reach. It is the highest-ever finish for the Lions in the tournament.

The Cherokee Bluff boys, in their first-ever season as Hall County's newest school, finished fifth after holding off Johnson 58-53 in a back-and-forth affair. West Hall finished seventh, avenging an earlier loss with a 61-57 victory over Flowery Branch.

In other girls action, Gainesville rallied from a late deficit to beat Chestatee 53-50 in the third-place game. The Lady War Eagles started strong jumping out to a 12-4 lead but the Lady Red Elephants stormed back by halftime. Chestatee took a lead into the fourth quarter and led by as many as five in the final period but could not hold on.

The Lakeview Academy girls took the fifth-place game with a 64-52 win over Cherokee Bluff while East Hall won the seventh-place game taking a 66-39 win over host West Hall, who had to play the entire tournament without its top player, Aashaya White, who was out with an injury.