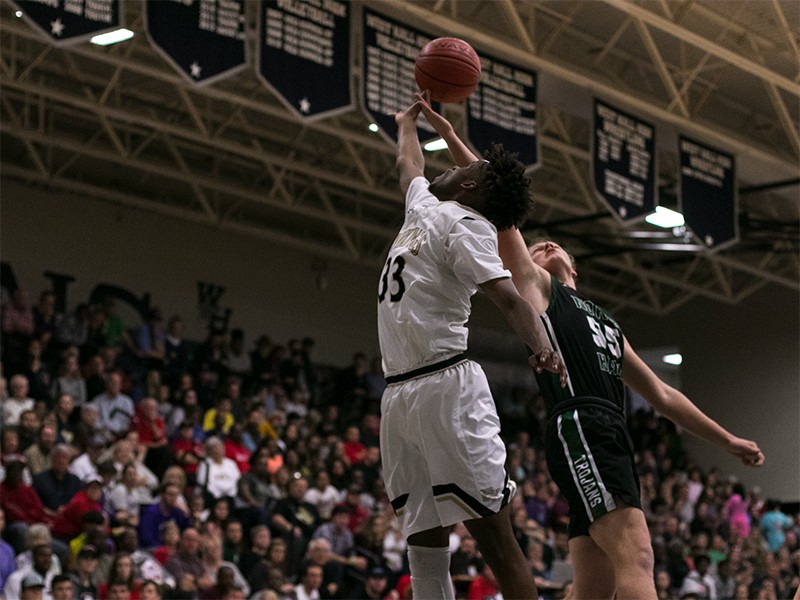 Boy, was he ever Friday night.

The junior guard poured in the Red Elephants final 10 points, none bigger than a spinning bank shot with just 6 seconds left to lift Gainesville to a heart-stopping 60-59 win over Lakeview Academy in the semifinals of the Lanierland Tournament.

However, Rubel almost looked to be the goat when he fouled Lakeview’s Blake McIntyre on purpose with 23 seconds left and the Red Elephants still clinging to a 58-57 lead. McIntyre, who paced the Lions with 20 points, drained both free throws to give the Lions a 59-58 lead.

“There was some miscommunication on that but fortunately it didn’t end that way. Rafael is one of our best scorers and we saw some matchups that we felt he could take advantage of,” Graham said. “We needed everyone of them. He just played a great game.”

Rubel finished with a game-high 23 points, 12 coming in the fourth quarter.

The final 30 seconds mirrored the entire 32 minutes as neither team led by more than seven points (Gainesville 10-3 in the opening minutes; Lakeview 34-31, 44-41, 46-43 all in the second half) and they swapped a dozen lead changes.

Lakeview coach Todd Cottrell and the Lions (8-5) are still looking for their first Lanierland final after their closest near-miss yet.

“We would love to have been able to hang on but I am proud of how we kept battling and coming back,” Cottrell said. “We may have gotten a little tired at the end on the defensive side and made a couple of mistakes that hurt us. But overall I feel this group is really headed in the right direction.”

“We couldn’t get any to fall early and that hurts when you think of lost points,” Cottrell said.

Lakeview looked to have grabbed the momentum early in the fourth quarter using an 8-2 run to take its 46-43 lead following a K.J. Millwood basket with 7:03 left. But Gainesville answered with a 9-0 spurt over the next three minutes, capped by the first of Rubel’s five straight baskets for a 52-46 lead.

The Lions pulled within a point three times before McIntyre’s free throws gave them the late lead setting up the wild finish.

Gainesville now will take on arch-rival East Hall in Saturday’s 7:30 p.m. final looking to pull the three-peat. The Red Elephants have knocked off the Vikings in each of the past two Lanierland finals.

“I always look forward to a Gainesville-East Hall matchup and this one should be a great one,” Graham said. “We’re really looking forward to it. What’s been great is that every game we’ve had (in Lanierland), including (Saturday), is like a playoff game so our kids that have not experienced being on the court in that kind of environment are getting that experience in this tournament.”

The Red Elephants stormed out of the locker room taking a 10-3 lead following a pair of baskets by Walt Dixon. The Lions did not help their cause early missing their first 6 shots, including five 3-pointers, with three turnovers in the first 4:30 of the game.

But Lakeview managed to force a pair of turnovers that Arturo Varela converted into a basket inside and Adam Cottrell hit the Lions first trey with 11 seconds left in the first quarter to cap a 7-0 run and tie the game at 10.

Gainesville took a 13-10 lead early in the second on another basket by Dixon but Lakeview answered with a 9-4 run, highlighted by an acrobatic three-point play by McIntyre between two Gainesville defenders to give the Lions their first lead at 19-17.

The teams traded baskets over the final three minutes with the Red Elephants eventually taking a 27-24 lead into the intermission.

Dixon finished with 12 points and Datavian Buffington had 11 for Gainesville.

Cottrell had 16 points for Lakeview while Varela, who battled foul trouble most of the game, chipped in 8 points for the Lions.

It might not have been possible, however, without a three-game losing streak in the prestigious Carolina Forest Tournament last week in Myrtle Beach.

“That really got us, I think, playing at a higher level,” said first-year East Hall coach Seth Thompson, whose team dropped two games in Myrtle Beach by just three total points. “I feel like this may be the kind of game we’re capable of and that tournament had a lot to do with it.”

The Vikings (9-6) will await the winner of the Lakeview Academy-Gainesville semifinal in Saturday’s 7:30 p.m. final. The Vikings dropped the past two finals to the Red Elephants.

East Hall never trailed but could not shake the Trojans (5-10) in the first half. East Hall ran out to a quick 7-2 lead in the opening 80 seconds capped by a 3-pointer from Jayvion Rucker. The Vikings pushed their lead to 19-8 late in the first quarter.

But North Hall responded closing out the first period on a 6-0 run and eventually pulled within 21-19 on a stick-back basket from Josh Cook midway through the second quarter.

A pair of Kylan Curry driving floaters got the Vikings back to a 28-21 lead but Nate Nixon converted a layup after a series of nifty passes to get the Trojans within 30-25 by halftime.

The third quarter and first three minutes of the fourth were the difference. After Ty Smith cut the Vikings lead to 32-27, East Hall exploded for a 31-2 outburst that did not end until a Clete Cooper 3-pointer gave the Vikings a 63-29 lead. They held the Trojans to just four points in the third quarter.

“We played lights out in the third quarter,” Thompson said. “The biggest thing was just finishing plays and we were able to stop their dribble-drive on defense. We played at a high level in the second half, I thought.”

Curry and Rucker both finished with 14 points to lead East Hall. Aaron Thomas and T.J. Campbell each added 11 points and Cooper had 9 on three 3-pointers. The Vikings drained 10 treys for the game.

North Hall was led by Cook and Smith, who each poured in 11 points.