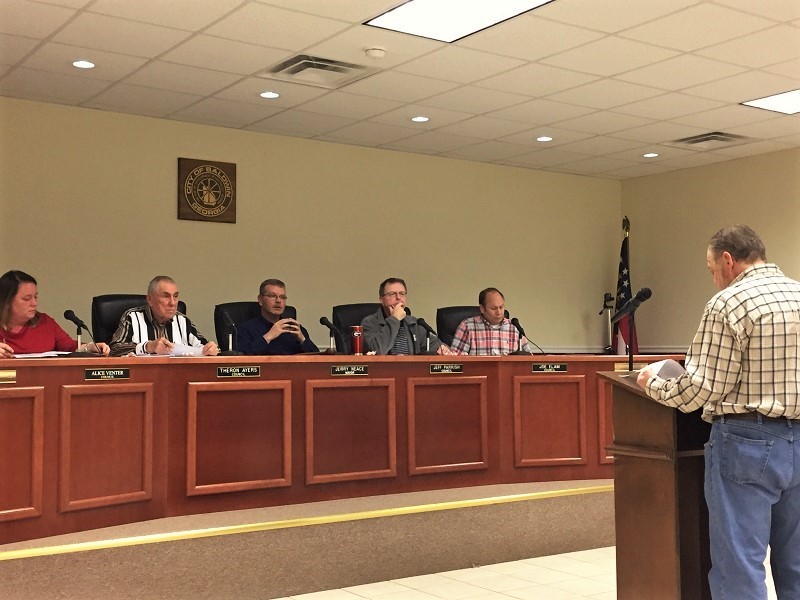 BALDWIN — The Baldwin City Council received a visit from a familiar face Monday night as former Councilman Larry Lewallen addressed the group about a partnership proposal with Baldwin Elementary School that began while he was still in office.

Lewallen, presenting information from the Baldwin Elementary Parent Teacher Organization, said the two LED message board sign faces will cost roughly $4,500, and the PTO will have to hold fundraisers or seek partnerships to make the project a reality.

That’s where Lewallen asked council members to step up and help fund with the cost.

“This was brought up about eight or nine months ago,” Mayor Jerry Neace said after the meeting. “We have discussed partnering with them and we were waiting on them to come back with a price. Now they have a price and it’s very reasonable, and it’s something the city council would very much consider as a joint project with the school board, specifically Baldwin Elementary, and the City of Baldwin.”

Lewallen said the Habersham County School System Maintenance Department can pull power from the end of the school building to the proposed sign site, located near the former crosswalk on Willingham Avenue near Williams Street.

Councilman Joe Elam said he immediately supports the city waiving the $190 in permit fees that would be charged for the project, adding he is willing to look at other options once the council gets firm cost figures from the PTO.

Councilman Jeff Parrish said he fully supports partnering with the school to install the signs, one in each direction, because Willingham Avenue passes what is now the back of the school. In addition to letting passing motorists know what school is there, Parrish said he sees the proposed signs as a means of alerting residents to emergency information.

“There’s a lot of interest in the community, not only with the school but with what’s going on inside the city,” Neace said. “We’ve got a lot of changes going on. We have a lot of events now starting to take place, with car shows, the fall festival, and the farmers’ market. Between the two of us, we can get messages out a little faster because we [the city] have two signs, one on Willingham going into Cornelia and on 441. Then this one, right here at the top of the hill on Willingham, would get the message out to a larger group of the citizens within the city.”

Lewallen said the board of education is going to provide the bricks and mortar for the sign base, but likely will need someone to install them when the project advances to that point.

“I think it would be a good project for both to get into pretty quick,” Neace said. “The school year is still going on. We would have it done prior to the end of the school year, and we could get messages out whether school was out, whether it was in. It would just let a larger contingency of our constituency know.”

The council will discuss the matter more in February.