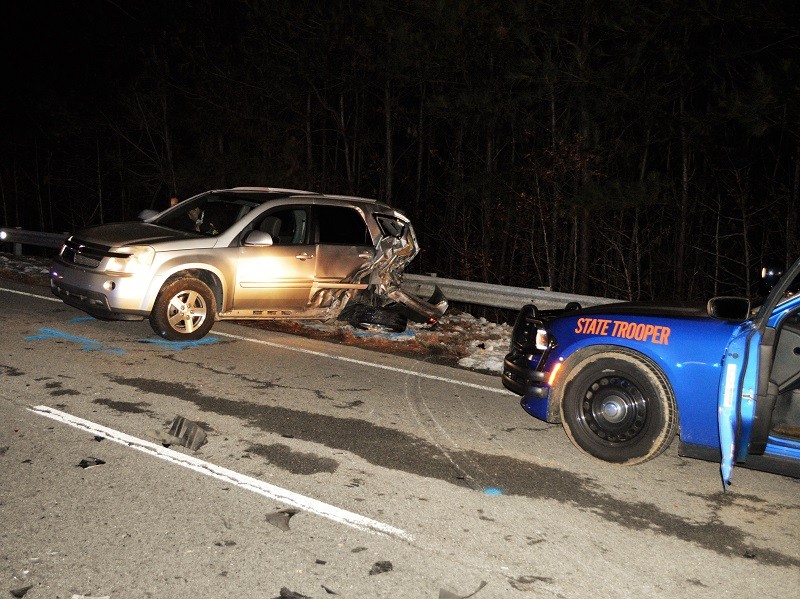 A Georgia State Patrol car is shown with the Chevrolet Equinox that was heavily damaged after being struck by a Dodge Charger that was fleeing from troopers on Ga. 365 in Demorest Sunday night.
Rob Moore 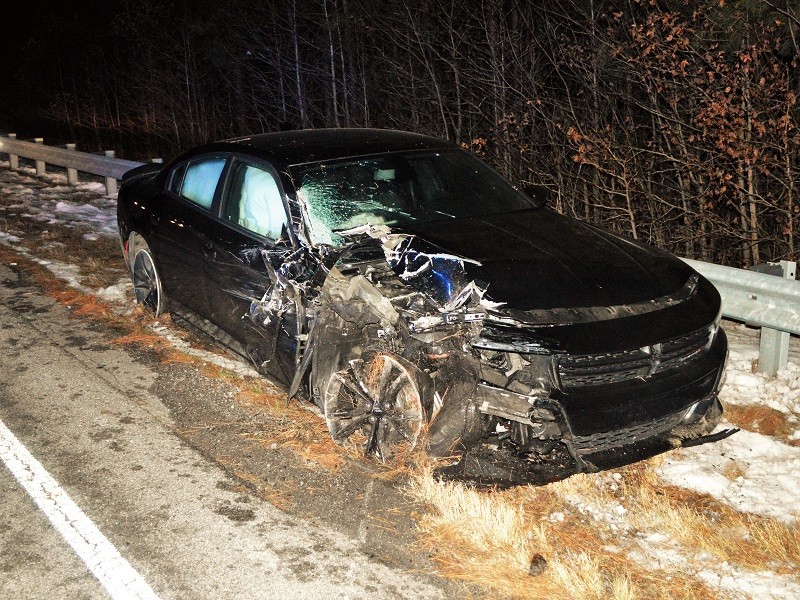 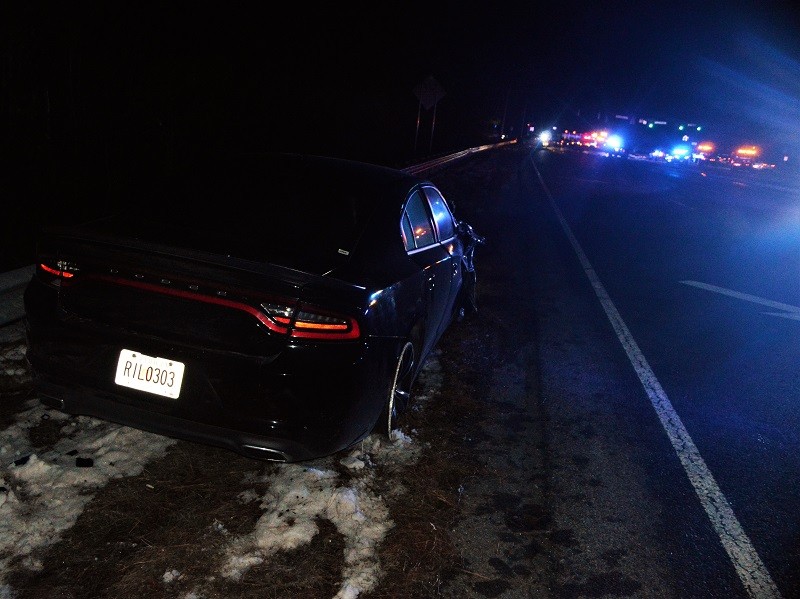 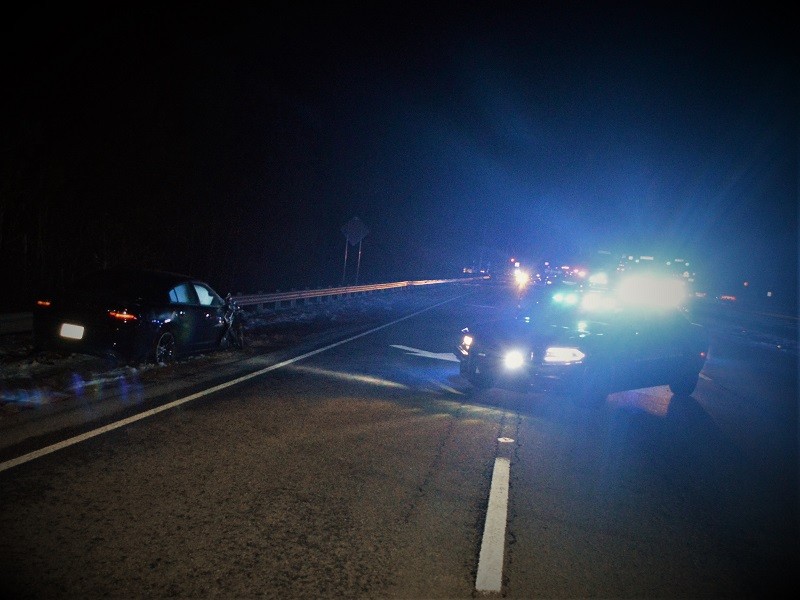 DEMOREST — UPDATE: A Chamblee woman termed a fugitive from justice remains in the Habersham County Detention Center after leading the Georgia State Patrol on a two-county chase Sunday night.

Kathrine Grace Blehm, 34, is charged with felony fleeing, driving under the influence of drugs, reckless driving, aggressive driving, speeding, following too closely, too fast for conditions, failure to maintain lane, following too closely, no seatbelt, failure to yield to emergency vehicle, and possibly other charges, according to Trooper 1st Class Travis Sanders of GSP Post 7 in Toccoa.

Blehm was driving a Dodge Charger R/T high-performance rental car and told troopers she was coming back from the casino in Cherokee at the time of the incidents, according to Sanders.

The pursuit started as a result of a lookout issued in Rabun County, where the woman’s aggressive driving allegedly endangered a man, woman and their three children, ages 11 months to 11 years.

“At approximately 7:50 p.m., Rabun County Communications placed a BOLO, or a lookout, for a black Dodge Charger with a Georgia tag,” Sanders said. “The BOLO was in reference to erratic driving and following another vehicle. The initial 9-1-1 caller that stated they were being followed by the Dodge Charger and the Dodge Charger passed my location on Ga. 15 just north of Wolfcreek Road.”

Sanders caught up with the vehicle and attempted to perform a traffic stop near McKay Road, but the Dodge Charger failed to yield to his blue lights and siren.

“It traveled through the gore and in and out of the median there at Joy Church Lane,” Sanders said. “The vehicle traveled south on Ga. 15 [U.S. 441] at very high rates of speed all the way to Demorest-Mt. Airy.”

A member of the family being followed by the Charger, whose name is being withheld for their protection, discussed what happened.

“She was driving crazy,” the victim said Monday morning. “She was following us and trying to swerve and run us off the road. It started [as we were] going over the mountain in Franklin and [continued] on into Clayton. That is when we called 9-1-1.

“They had us turn around to see if she would follow us,” the victim said. “She did not. When we turned back around going southbound, there she was pulled over waiting on us. The 9-1-1 operator sent GSP after her; she swerved around us trying to hit us again, jumped the median and proceeded to take off in a high-speed chase. We have no idea why she was following our family. It was the scariest and most bizarre situation.”

Troopers say they aren’t sure why the driver was driving aggressively toward that family’s vehicle.

“There’s no way to know what her intentions were toward them,” Sanders said.

Troopers credit interagency cooperation with the successful termination of the high-speed pursuit.

Asked for the speed of the fleeing vehicle during the pursuit, “We’re talking gross speeding,” Sanders said.

Demorest Police Department had several officers on duty for the city’s Christmas in the Park event, so those officers were able to respond to a call for assistance from GSP and assist with clearing the intersection at Demorest-Mt. Airy Highway and with deploying spike strips at that location.

That vehicle, a Chevrolet Equinox occupied by two adults and 7- and 8-year-old girls, spun around and came to rest. The Charger went out of control and continued about a quarter-mile down the road, where Blehm was taken into custody.

“The fact that those stop sticks got the speed reduced,” Sr. Trooper John Crawford of GSP Post 7 said. “Thanks to Habersham deputies and Demorest for getting the speed down prior to the collision happening.”

Crawford praised the Habersham deputy for helping to reduce the fleeing vehicle’s speed before it reached the heavy traffic in Demorest.

“Up until that point [Cody Road], she’d been running well over 100 and approaching 150 mph,” Crawford said.

Crawford said traffic near the Demorest intersection, normally heavy on a Sunday night because of church, was even heavier because of the city’s tree lighting event, and he credits Krockum and his officers for potentially saving lives.

“It was the best situation for the worst circumstances, as far as we were concerned,” Crawford said. “The inter-agency contact was good. We had good radio traffic between agencies, and the fact that they were able to be in the area with multiple officers at a very busy and dangerous intersection helped bring it to a close without any further property damage or injury.”

A veteran of nearly 25 years with GSP, Crawford said he was thankful for Sunday night’s teamwork.

“That even amazed me when I saw how good everybody worked together, and how they were able to reign it down from something that could have been a fatality down to no injuries, basically,” Crawford said.

In addition to the GSP charges in Habersham County, Blehm also is facing charges in Rabun County, Sanders said.

She also is wanted on multiple warrants from various metro counties - “some of which were felony warrants,” Sanders said.

During the pursuit, Sanders’ car and a Habersham County Sheriff’s Office patrol car sustained flat tires from debris in the highway. Habersham County Fleet Maintenance responded to change out the damaged tires.

She does have a valid Georgia driver’s license, according to Crawford.