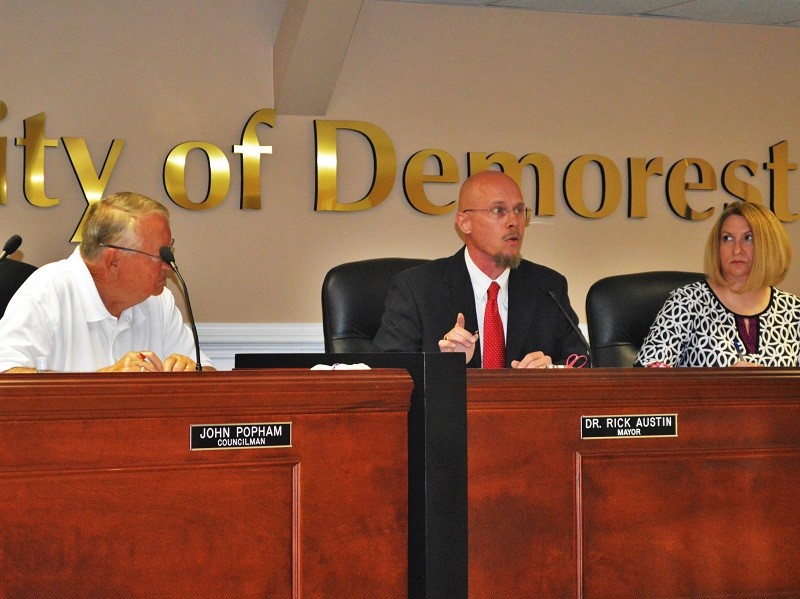 Demorest Mayor Rick Austin expresses his frustration with the investigation performed by the Georgia Bureau of Investigation into $600,000 of missing city funds.
Rob Moore
Contact Editor

DEMOREST — Demorest officials are asking the FBI to look into the theft of $600,000 in public money.

Tuesday night, the city council unanimously adopted a resolution requesting the federal probe of money taken from city coffers from 2009 to 2013.

The resolution came after a private investigation, and one conducted by the Georgia Bureau of Investigation that was presented to the district attorney's office produced no results.

Mayor Rick Austin didn't hesitate to express his frustration with the process, saying the city has expended about $80,000 in taxpayer money to investigate what he believes should have been the GBI's work.

In response to a question from Councilwoman Florence Wikle about why the GBI and district attorney's office didn't pursue any information obtained during their investigation, Austin said, "You asked the million-dollar, actually the $600,000, question.

"I'll tell you that I have been greatly disappointed in how this process has worked," Austin said. "I know of no other place where a crime of this magnitude could be committed and no more work be done. We have done everything that the Georgia Bureau of Investigation has asked us to do, including spending a tremendous amount of money, in order to do their job."

Austin's frustration with the limited investigation by the GBI grew the more he discussed it.

"I'll tell you very simply, their answer to us for far too long is that this is a hard case," Austin said. "My answer to that is yes, it is a hard case, but you have a job to do. When the director of the Georgia Bureau of Investigation tells me that they have not even subpoenaed nor looked at bank records of folks that might be involved tells me that they've done a pretty sloppy job, and if they are doing this type of work then God help the citizens of the state of Georgia."

Austin cited information he received about a GBI investigation into the theft of guns from a Banks County business, saying if agents could tie one clue to an individual then they should be able to isolate the person or persons responsible for the theft of city money.

"They found a hammer at the scene of that [Banks County] crime," Austin said. "They were able to take that hammer and connect that hammer to a purchase sale in a hardware store in Athens, Ga., and tie it to a female that actually purchased the hammer. If you can take a hammer, of which there must be at least a half a million in Northeast Georgia, and be able to figure that information out, and you tell me that we can't take the information that we paid for and handed them and done their job for them and can't and aren't willing to at least pull bank records and examine the potential people who may have taken $600,000 is inexcusable and unacceptable!"

Acknowledging Austin's comments about what he said is an incomplete state investigation, Councilman Sean Moore said city leaders need to be careful not to spend too much additional money on any subsequent pursuit of justice.

City Attorney Joey Homans said if the city has to present information to a grand jury at some point it could cost up to $10,000, but that should be about the only additional expense.

Austin said the city meets the criteria for the FBI to take the case.

While the city qualifies for an FBI investigation, Austin isn't sure if that will happen, but he remains hopeful.

"This resolution is just a request and a plea for assistance as we try to put this issue to rest and find resolution to this missing money," Austin said.