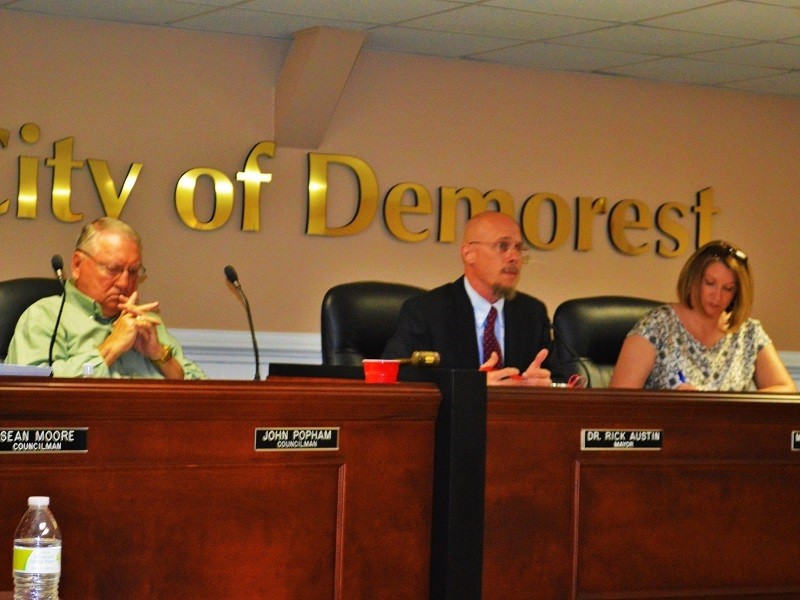 DEMOREST — Demorest officials say they have passed a groundbreaking personnel policy amendment believed to be the first of its kind in Georgia.

Tuesday night, the city council voted unanimously to amend the city's personnel policy to allow city employees with a valid concealed carry permit to carry their weapons during the workday.

"In my research and in talking to the attorney firm that helped us draft this we, as I understand it, are the first local government entity, either municipality or county government, that has enacted anything of this nature in the state of Georgia, so we're breaking ground in the state of Georgia by enabling our employees in the City of Demorest to be able to choose to carry. We'd proud of that policy and the way we put it together, and we think it is a good piece of policy that will be reflected and utilized by some of our employees."

Previously, the personnel policy prohibited employees from the same concealed carry afforded to any other citizen under the Safe Carry Protection Act passed in 2014.

"Embedded in that lengthy piece of legislation is the right for individuals who hold a concealed weapon permit to be able to carry that weapon in a government facility as long as ingress is not monitored," said Mayor Rick Austin. "That would include every building that we have in the City of Demorest.

"However, our personnel policies prevent any employee from carrying in a government building, so in effect our personnel policies were keeping our employees from observing the same rights that other individuals in the state of Georgia have," Austin said. "It creates a gun-free zone, and it's just something that we needed to rectify. I'm proud that we are moving forward. We have many stipulations."

Those provisions, in short, include:

• Employee must notify his or her supervisor and complete any training deemed necessary by the chief of police;

• An employee whose "weapons carry license" is suspended must immediately notify his or her supervisor in writing of that fact;

• Employee must maintain control of the concealed firearm and ammunition at all times;

• No employee is required or directed to carry or use a weapon;

• No employee can carry a concealed weapon in the course of employment in a private vehicle or on private property owned or leased over the objections of the owner;

• An employee who chooses to carry a firearm during the course of employment must have that firearm concealed and on his or her person, carried in a holster or other appropriate carrying device at all times unless legally using the weapon;

• An employee who stores a firearm in a vehicle owned by the City of Demorest or any private vehicle in a parking lot owned or controlled by the city during the course of employment must store the firearm in an locked case, with the case out of plain view. The employee must provided the lockable case and it must be approved by the chief of police;

• No employee may carry a concealed weapon in a violent, threatening or intimidating manner, as defined within the policy;

• Conduct violating the policy is punishable by disciplinary action, up to and including dismissal.

Police Chief Robin Krockum, who said he supports the policy change, will determine whether each employee is proficient enough with a weapon to carry.

Austin said the policy change is in keeping with the equal protection portion of the 14th Amendment to the Constitution, and with the Second Amendment.

"There is no cost to the city, but it certainly enables our employees to exercise their Second Amendment rights, as guaranteed by the Constitution of the United States," Austin said. "It's something that I feel passionate about."