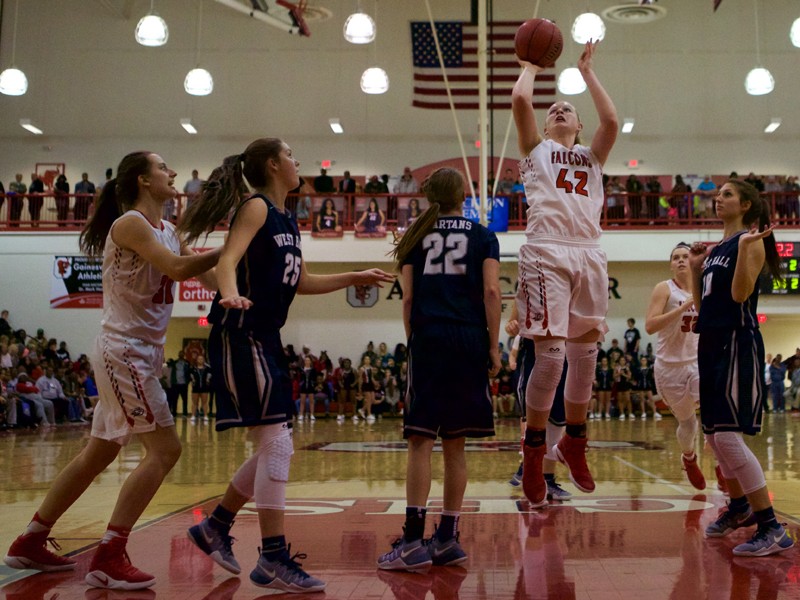 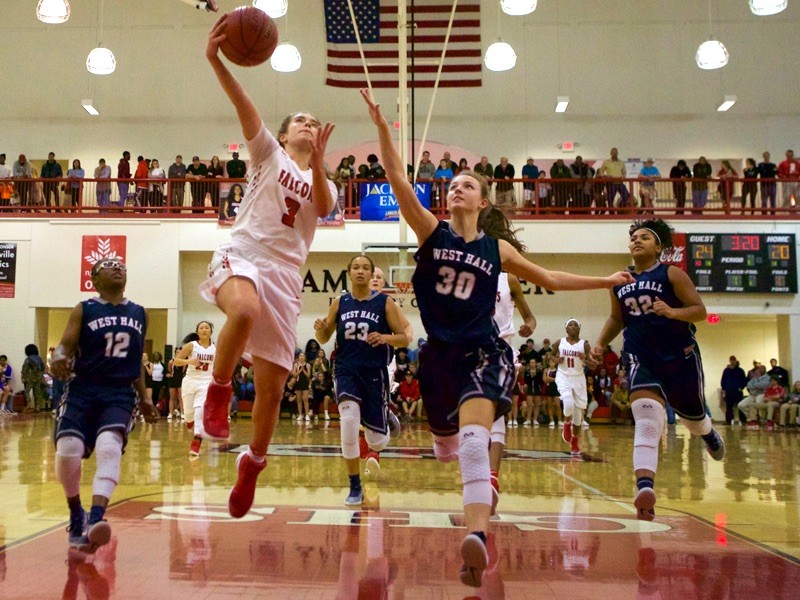 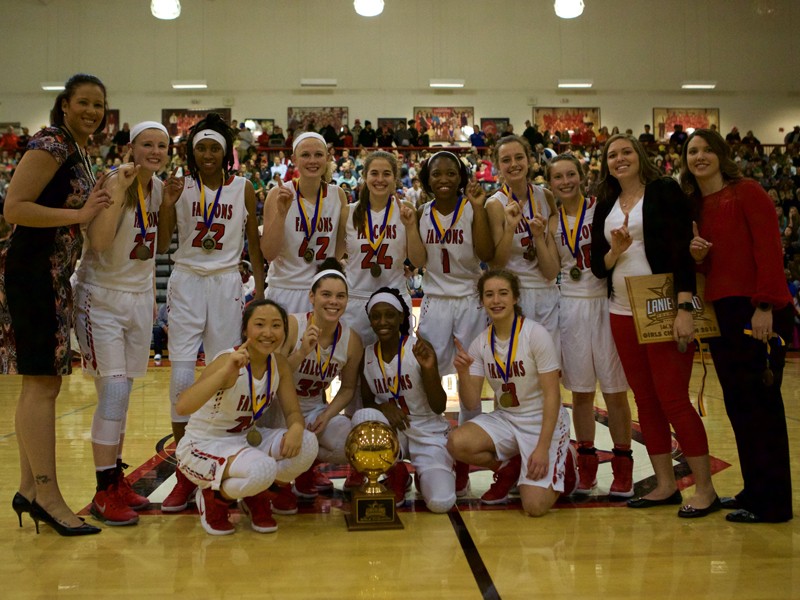 It was all the ingredients the Flowery Branch girls did not want to see in their quest to repeat as Lanierland champions Friday night against West Hall.

What they did have was Taniyah Worth and Julianne Sutton.

The pair combined for 14 fourth quarter points and sparked a defensive resurgence that allowed the Lady Falcons to rally from a third quarter deficit for a 59-50 win at the Gainesville gym and capture their second consecutive Lanierland crown.

“Our top players just started making some plays,” Lady Falcons coach Courtney Newton-Gonzalez said. “West Hall played well and we knew they would. We played probably our worst half of the season (in the first half) but the girls found a way to overcome that.”

But, the Lady Falcons opened the fourth quarter with a pair of steals to spark a 14-0 run and take control. McKendree’s fifth 3-pointer of the game broke the run and pulled the Lady Spartans back within 51-45 with 2:26 left but they could get no closer.

“We really didn’t make any adjustments other than to start playing defense the way we’re supposed too,” Courtney Newton-Gonzalez said. “To overcome a half like that was good to see.”

West Hall coach Bryan Richerson said those opening possessions of the fourth quarter, coupled with two turnovers to end the third with a chance to build on their lead, were the turning point.

“We lost by three possessions and we gave away four and we couldn’t get our rhythm back,” he said. “We also got lazy on defense and gave up some easy baskets in the fourth quarter. But we just played one of the best teams in the state and we had the lead so there is plenty to build on as we move forward.”

The  Lady Falcons started the game strong using their height and defensive pressure to force three quick West Hall turnovers while running out to a 6-2 lead in the first two minutes. Two of their first three baskets came off of second chances on offensive rebounds.

But the Lady Spartans finally settled into their up-tempo style and used their own defense to grab the lead when Macy Passmore converted a steal and layup for a 7-6 lead. Passmore capped the 9-1 run with a basket off a McKendree assist to take an 11-7 lead two minutes later.

West Hall (11-4) was able to continue its attack and would take a 17-11 lead into the second quarter after four straight points by McKendree, who finished with a game-high 30 points.

McKendree was quiet in the early going as she was shadowed by Lady Falcons’ defensive specialist Queen Scott. But McKendree did manage several drives resulting in free throws and three assists as Scott picked up two quick fouls. The West Hall defense also snagged four early steals and drew five charging calls to get both Worth and Lexi Sengkhammee in foul trouble as well.

“They are a tough team to guard and we helped them some,” Newton-Gonzalez said.

But both Worth, who was named the tournament MVP, and Sutton came out on fire to start the fourth. Worth assisted on three baskets and both added a pair of steals as the Lady Falcons took control.

“It’s hard to win this tournament so this is a huge deal for us,” Newton-Gonzalez said. “It’s always great to win it and we feel honored.”

With the Lady Spartans trying mount a late rally, Scott tied up McKendree for a jump ball call with 20 seconds left and the Lady Falcons dribbled out the final seconds

Sutton had 13 points to lead Flowery Branch. Scott had 11 and Worth added 10 for the Lady Falcons. Janoah Williams had seven points off the bench and gave Flowery Branch some crucial quality minutes early while they were battling foul trouble.

Macy Passmore had 13 for West Hall but no other Lady Spartans had more than three points.

It was the first finals appearance for West Hall since the program won four straight from 1997-2000. Richerson said it was a major accomplishment for their current program.

“I’m proud of the girls. We wanted them to get the experience of an atmosphere like this and they got that,” he said. “I think this will help us in the future.”

Gainesville closed out the game on a 17-7 run to claim the third place trophy.

The Lady Red Elephants (8-3) trailed much of the first half as Lakeview Academy (11-3) got a solid start from Hanna Grogan. The Lady Lions led 16-11 after the first quarter but Gainesville rallied to tie the game at 33 by halftime.

Lakeview Academy took a 42-41 lead into the fourth quarter. But the Lady Red Elephants, behind Taylor Hawks, opened the final period with a 7-0 run. Lakeview answered with a 6-0 spurt to tie the game but Gainesville exploded for a 10-2 run and then held off any Lady Lions rally hitting 5-of-6 free throws in the final minute.

Grogan had 24 to lead Lakeview Academy. Sadie Thrailkill and Christen Copeland each had 14 points for the Lady Lions.

North Hall held East Hall to just two second quarter points to pull away en route to the win in the fifth-place game.

Carly Winters led East Hall with 11 points. Kylah Mize was held to a tournament-low 10 points for the Lady Vikings.

The Lady War Eagles led 14-2 after the first quarter and took a 24-5 lead into halftime. They held the Lady Knights scoreless in the third quarter and sprinted out to a 42-5 lead.