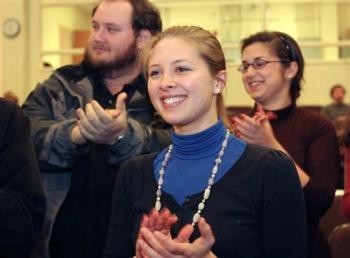 Demario James Atwater, 21, of Durham, was ordered held without bond at an initial court appearance. Police said they are still searching for the second suspect, 17-year-old Lawrence Alvin Lovett Jr.

Chapel Hill Police Chief Brian Curran declined to say whether Lovett was the subject of an intense police standoff Wednesday afternoon in nearby Durham. City Councilman Eugene Brown said it appears the standoff was resolved without an arrest.

Police in Durham refused to comment, referring all questions about the Carson case to police in Chapel Hill.

Shackled at the ankles and waist and with a public defender at his side, Atwater only whispered ``yes'' on Wednesday when asked at his initial appearance if he understood the charges against him. His next court date was set for March 24.

``I hope the arrest can ease the minds of some in the community,'' Orange County District Attorney Jim Woodall said.

Messages left with the Orange County public defender's office on Wednesday were not returned.

Curran would not say which of the suspects detectives believe shot and killed Carson, 22, of Athens, Ga., who was found last Wednesday lying on a street about a mile from campus. The biology and political science major had been shot several times, including once in the right temple.

Carson's body was positively identified the next day, leading to a massive outpouring of grief at North Carolina. Thousands gathered that day at two campus memorial services, and a third is planned for next week at the school's basketball arena.

In the days after Carson's death, police focused their investigation on a several ATM and convenience store surveillance photos.

Police believe Lovett was pictured in two photos taken at an ATM machine, driving Carson's Toyota Highlander, while Atwater is in the back seat. Police also believe Atwater was the suspect shown trying to use Carson's ATM card inside a convenience store.

Curran has previously declined to say when the surveillance photos were taken or the exact location of the ATM machine and convenience store, or if any money was successfully withdrawn from Carson's account.

The Board of Trustees at North Carolina offered a $25,000 reward for information leading to an arrest in Carson's death, and police received hundreds of tips after the first two photos were released over the weekend. Curran said Wednesday a tip received through the Crimestoppers program led them to the suspects.

Carson was a prestigious Morehead-Cain scholar at North Carolina, where she was remembered by thousands who gathered last Thursday at two campus memorial services. Hundreds of mourners filled the First United Methodist Church in Athens on Sunday at a memorial service in her hometown.

The university said Wednesday a third memorial service will be held next week at the Smith Center, the campus basketball arena.

``Our interests are in seeing justice served and helping our community during this difficult time,'' university Chancellor James Moeser said in a statement.

``We are thankful for all of the expressions of support pouring in for the Carolina family and our local community in these past few days. Those kind thoughts and prayers for Eve Carson's family and our community have made a difference.''

Associated Press writer Erin Gartner reported from Chapel Hill.
(Copyright 2008 by The Associated Press. All Rights Reserved.)
© Copyright 2021 AccessWDUN.com
All rights reserved. This material may not be published, broadcast, rewritten, or redistributed without permission.