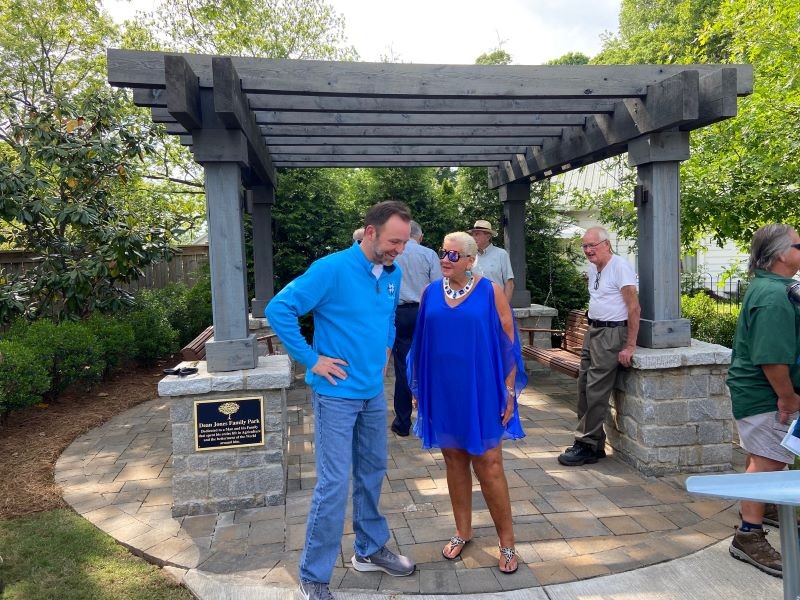 The site was developed as what officials called a "pocket park" and sits at the corner of Lights Ferry Road roundabout in the city's downtown. Its namesake, Dean Smith, was a longtime farmer in the city and the husband of the late City Councilwoman Mary Jones.

Former Flowery Branch Mayor Mike Miller spoke at Thursday's dedication and said naming the park for the Smith family was an easy decision.

"Years ago when we came up with the idea of doing this park, it was right here at the roundabout that Mary Jones was instrumental in securing the funding for the city through some state grants and low-interest loans that were available. The overall impact of the Jones family on Flowery Branch kind of made it a no-brainer," Miller said. "But at the time, Mary was insistent that her name not be on it, so her and (Jones' daughter) Ann came to us and wanted it to be the Dean Jones Family Park."

Mary Jones died almost three years ago to the day of the park's dedication at the age of 76.

"My mother finally said 'pick out a name,'" Ann Jones said. "I said, the Jones family has been here for so many generations. It has to bear that name. I said it has to be the patriarch of the family and she agreed."

Jones said it was an honor to see the park named for her family.

"My daddy died early, but that was a life well spent. He raised me in agriculture and livestock and it makes me know that this is what make the world work and I'm tickled to death to have this opportunity," Jones said.

Miller said it was good to see the park dedicated after he chose not to seek re-election in 2021.

"Through the years we talked about projects and there were nay-sayers that said they would never be done. This roundabout is one of them and the parks and green spaces," Miller said. "It really is satisfying to be able to look back and see the things that we thought and had drawn up on paper now come to fruition and see people taking advantage of them."