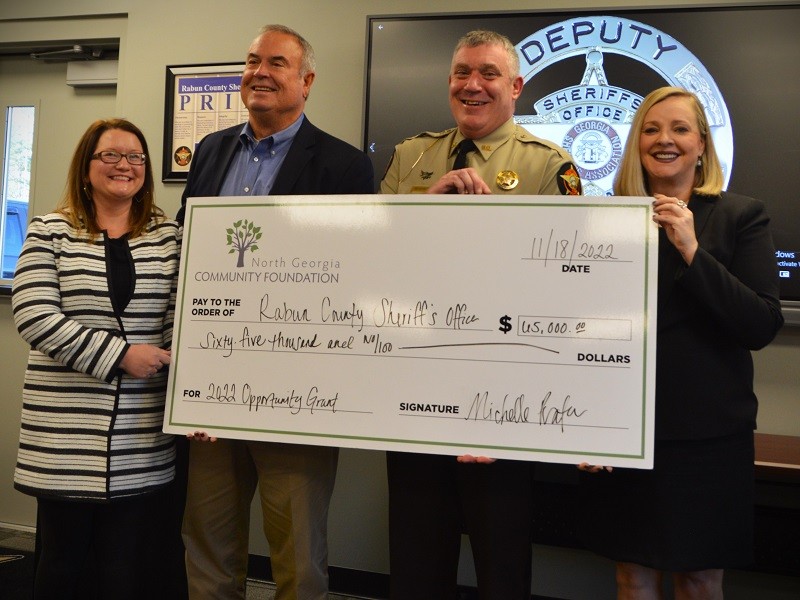 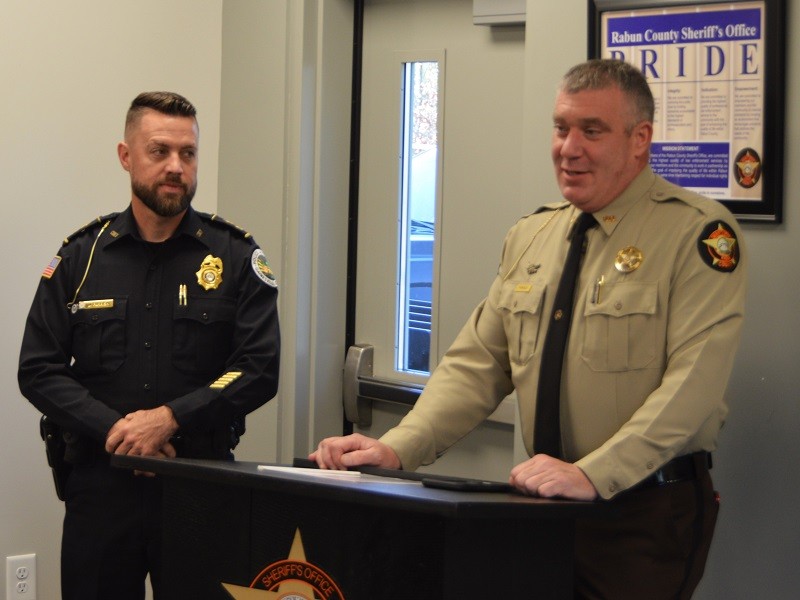 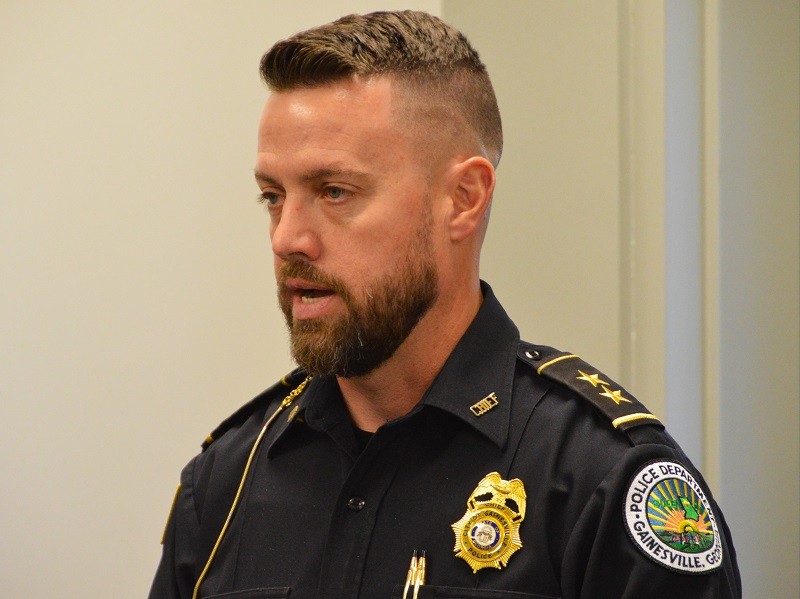 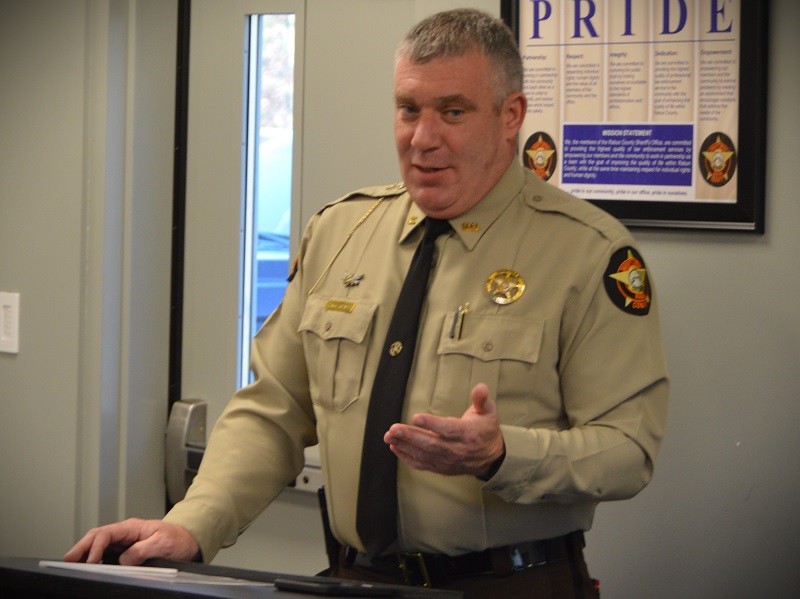 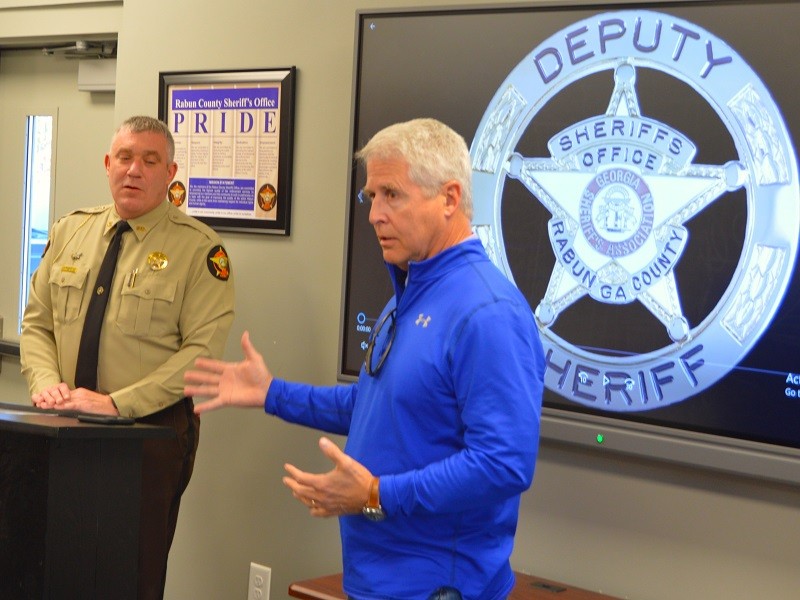 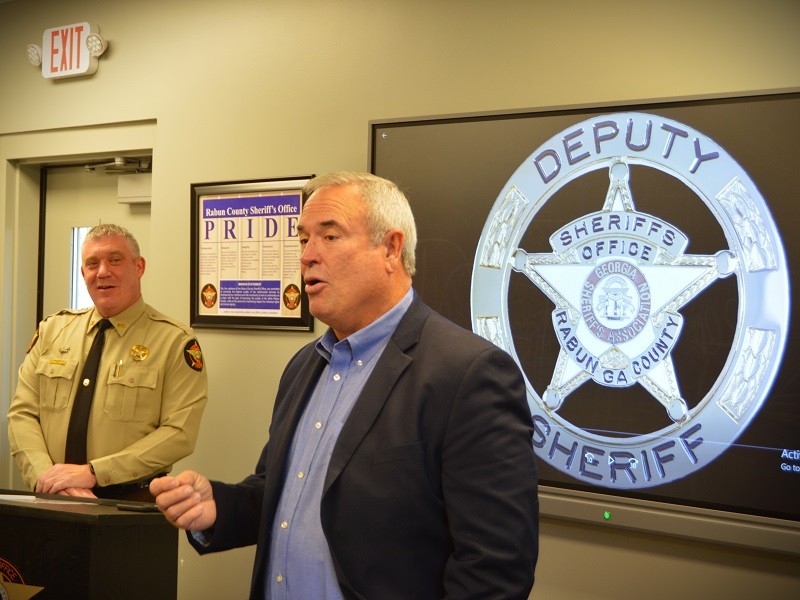 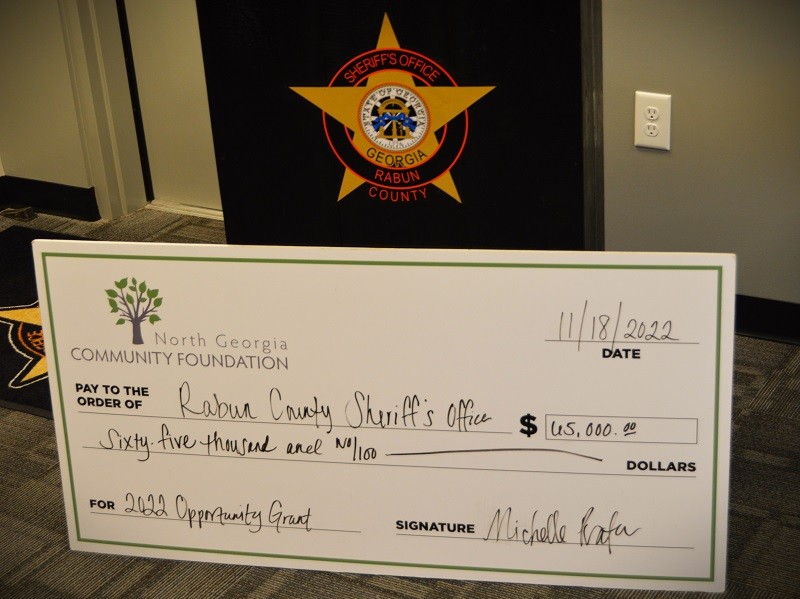 Mental health is a growing issue for law enforcement across the region, state and nation, and thanks to a $65,000 grant from the North Georgia Community Foundation the Rabun County Sheriff’s Office soon will be adding a mental health clinician.

Michelle Prater and Abby Carter of the Foundation presented the grant check Friday in Rabun County.

Like the program funded for Gainesville Police Department in 2019 by the Foundation, the Opportunity Grant will provide funds for the sheriff’s office to hire a clinician to work with inmates, people in the community and sheriff’s office employees.

“I'm thankful to the North Georgia Community Foundation for making the Opportunity Grants available to people and agencies like us to be able to start these initiatives,” Nichols said.

He said the clinician’s work initially will be a combination of office hours and on-call availability until officials determine what works best for Rabun County.

“I think in Gainesville it was going to start out contract and ended up going to an hourly pay position,” Nichols said. “And we have so many hours allotted per week that we can adjust. So, we’ll be going down and meeting with Gainesville’s mental health supervisor and just kind of see how their program’s set up to see how we can tweak what they’ve got to fit our community up here.”

Gainesville Police Chief Jay Parrish attended Friday’s grant presentation in Rabun County and shared about the successes his department has seen since adding mental health clinicians, which Nichols sees as a model program.

Parrish is about to hire his third mental health clinician, Nichols said.

“I was appointed chief in Gainesville in 2019 and I knew mental health was one of the main things that we had to focus on because that was the majority of our calls and it was definitely the majority of our calls that were leading to use of forces and this recidivism in jail for petty and low-level crimes,” Parrish said. “Our program would not be as successful as it is without the partners and community.”

“We’ve had had almost 600 cases as of the end of October that we’ve worked this year,” Parrish said. “We do things like respond to crises in the field when they’re in a mental and a behavioral health crisis. We work inside our jail for cases that Gainesville P.D. makes and that’s extremely important, as the sheriff said, on the exit plan. How are you going to get out of here if you have substance abuse issues? If it’s mental health, how are you going to get your meds? How are we going to keep you in touch with mental health providers within our community so that you don’t end up back where you are? Mental health is something that can be treated, and it can be managed but undiagnosed, unmanaged it leads to communal problems.”

The Rabun County program will not be limited to only members of the community exhibiting possible mental health issues, but also will be able to help those who respond to difficult situations.

“Just like Chief Parrish’s in Gainesville, our mental health clinician will be available to the employees here at the sheriff's office – and I hope to even broaden that to all the county employees, and even maybe the volunteer firemen once we get up and going, because I think more emphasis has come to light on public safety and mental health,” Nichols said. “But, you know, there's a lot of things that all of these different disciplines see out there that is difficult and somehow, they work through that. But to be able to have a person here in the county they can talk to about these situations they deal with it work or even if it's something off the clock, I think would be a great benefit. And that's probably one of the main reasons I'm excited about this program: It’s not only available for the community, but also for employees.”

“I’m very familiar with the program in Gainesville,” Woerner said. “Forsyth County has one. Athens-Clarke County has one. Carrollton has one. And it’s been really effective and the thing that I like about is – there’s two things: It’s the right thing to do and it’s going to save us money, so when you can put those two things together, I think it’s just real, real exciting so I want to thank y’all for getting this program underway.”

Prater, president and CEO of the North Georgia Community Foundation, explained the type of grant received by the Rabun County Sheriff’s Office.

“In 2019, the North Georgia Community Foundation created this new program that is called the Opportunity Grants,” Prater said. “And the reason for that is we wanted to have a program that would provide seed money for new or expanding programs that had critical impact.”

Prater says support for the Rabun County S.O. request from both the selection committee and the Foundation board was overwhelming.

“Every year, we have a committee of community leaders throughout North Georgia who are looking for the programs that really qualify here,” Prater said. “And we were very fortunate that the person who represents Rabun County for us brought this to us. And we were excited about that, because we've already seen the success that we had had in Gainesville when we funded this in 2019. And so, we were thrilled to be able to partner with them and provide that. So, the sheriff had to come down and do a presentation to our selection committee. He did a great job, and they were blown away with that, and so voted unanimously to, as well as our board, to fund this. So, we're very, very excited about that. And Abby Carter, who is our Director of Strategic Initiatives, runs this program for us.”

Nichols offered an example of why he hopes this program is a success.

“I told the story of a lady here,” Nichols said. “I'll just call her Nancy, and you know, we dealt with her for many years. Either arrest or mental evaluation would be the result. And if we would have had this program then, that would have been reduced drastically, the amount of times we had to deal with her. And she would have gotten the help that she needed. And so, I guess it comes down to it, I'm doing this for all the Nancys that’s out there in my county, and that we all can live here, and all live a better life here and better quality of life here and Rabun County.”

“One of the things that I ran on as a commissioner was to try to bring a mental health clinic back to Rabun County, which we started last Monday,” Woerner said. “It’s been in the works for a while. The pandemic kind of slowed everything down, but we've got it started. It's in our old election office. We refurbished our old election office for very little money. And Avita actually furnished it with the kind of furniture that you would put in a clinic and things of that nature and so we're really excited about it. They started serving clients. I went to visit last week, and just spoke with them momentarily to see how things were going and see if there was anything they needed. And they told me that they had already been contacted by the court and said that they were sending them 13 people. And when I left there, I got thinking to myself well where did we used to send those 13 people? I’m sure we had to transport them somewhere. And now they've got a place right across the street practically from the courthouse that can see these folks.”

Woerner said putting mental health solutions back into communities is something he is passionate about just as late Georgia House Speaker David Ralston was.

“A lot of times these people just need to either get back on their medication or start medication or just see a counselor on a regular basis, and if we can get that going, it keeps them out of our jails,” Woerner said. “And because that's the only other place they can go, and it also keeps them out of our emergency rooms. So, I think it's a great program, that – as that one Gainesville officer said – everybody's going to have one eventually. And I think, and I really like to say that it's the right thing to do.”

Woerner said he he looks forward to seeing what Kevin Tanner will do as the new commissioner of the Georgia Department of Behavioral Health and Developmental Delays.