5 Things: What we learned from Week 4 of high school football 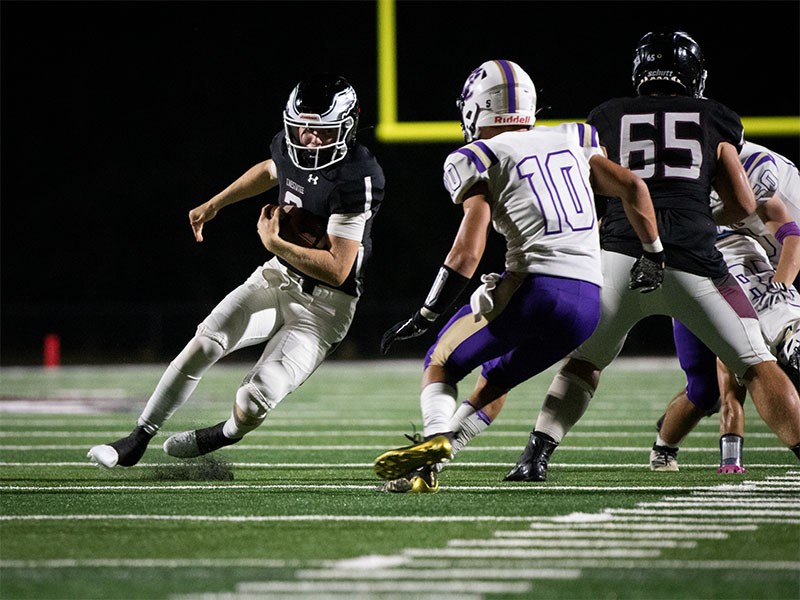 Region schedules are inching closer and will actually start this Friday for a number of area teams. That means last week saw some of the final tune-ups for some area teams, and there were some eye-opening performances in those matchups.

Here's what we learned in Week 4:

Gainesville's offense had an explosive outing in Week 2 against Chattahoochee, but everyone knew that last Friday's rivalry matchup with Flowery Branch would present much stiffer test of just how far the Red Elephants' new-look attack had come. They responded by putting on a show. Sophomore quarterback Baxter Wright, in his first season as a full-time starter, had a coming out party at the best possible time, throwing for 289 yards and accounting for two touchdowns to lead an offense that put up 42 points on the best statistical defense they had faced yet this season. It was made more impressive by the fact that they needed every one of those points to hold off the Falcons in a shootout 42-35 to snap a three-game losing streak in the series. If Gainesville (2-1) can continue the offensive fireworks, Region 6-7A should be on alert. The Red Elephants were just 10 points short of winning the region title in 2020. Right now, points aren't looking too hard to come by for this unit.

2. Luke Bornhorst is leading a resurgence at Chestatee

If anyone was sleeping on Chestatee, the War Eagles just gave them a wake-up call. After snapping an 11-game losing streak with a thrilling win over Union County in Week 3, they rode that momentum to a statement performance Friday night as they routed previously unbeaten West Hall 42-7. While there was virtually no weakness to spot in Chestatee's performance, the most impressive play was that of quarterback Luke Bornhorst. He showed promise late in the 2020 season after taking over for injured star Christian Charles, but he looks to be coming into his own now as he threw five touchdown passes, all in the first half, as they raced out to a 42-0 halftime lead over the Spartans. Two of those touchdowns were longer than 50 yards. The War Eagles are now 2-1 for the first time since 2013 and are on a winning streak for the first time since 2017. There's no better time to be finding this momentum, as they now prepare for the Battle of Highway 60 against North Hall this Friday with region play starting the week after.

Apparently, nobody bothered to tell Habersham Central that replacing nearly their entire starting lineup from last year's playoff team is supposed to lead to early-season struggles. Coach Benji Harrison is hoping it stays that way. The Raiders are 2-1 after Friday night's 21-12 win at White County. Their only loss was a three-point defeat in the season opener at Madison County. The win over the Warriors was done in a manner that you would expect a veteran roster to pull off, as they used defense and special teams to grind out a win over a White County team that actually outgained them 216-121 in total yards. Still, they contained a White County offense that features explosive playmakers in Silas Mulligan and Darius Cannon. Habersham's toughest test of the season to date is coming up this Friday as they matchup with arch-rival Stephens County and making the playoffs in Region 8-6A is always a tough task, but so far, these young Raiders look up to the task.

Georgia high school football is widely considered as some of the best in the country, and northeast Georgia is holding up its end of the bargain so far this year. Friday night saw two area teams rout highly-touted programs from the state of North Carolina. Buford turned an early battle into a runaway 44-17 win over Myers Park while Rabun County traveled through the mountains to defending North Carolina Class A state champion Murphy and blew out the Bulldogs 59-14. The week before, Jefferson routed Southside of Greenville, South Carolina 45-7 in a game the Dragons led 42-0 at the end of the first quarter. It serves as a reminder of just how fortunate football fans in the peach state are to have some of the best football in American to watch week in and week out. Sometimes, it can be easy to take the amount of talent across the state for granted as it has become so commonplace over the last couple of decades, but star-studded rosters like those around northeast Georgia are not the norm in all parts of the country.

Every team in Region 7-3A is trying to find their rhythm ahead of what's expected to be a dogfight of a championship race. Friday night, Dawson County may have finally found theirs. The Tigers routed Northview 52-7 in Dawsonville for their first win of the year. While the Titans have struggled over the last several years, the win shouldn't be brushed off. Dawson County (1-3) also started 0-3 in 2020, only to find themselves in the thick of the championship race that November, and this Northview game was also their first win that season. The most encouraging thing for the Tigers Friday night was the return of explosive offense, which has been the cornerstone of their success over the last few years. They are at their best when quarterback Zach Holtzclaw is leading a high-powered passing attack, and after the departure of receiver Jaden Gibson, he seems to have found his new top target in Bailey Dameron, who turned in his fourth straight 100-yard receiving performance Friday. Dawson County will now get a week off before opening Region 7-3A play with a key matchup at White County.