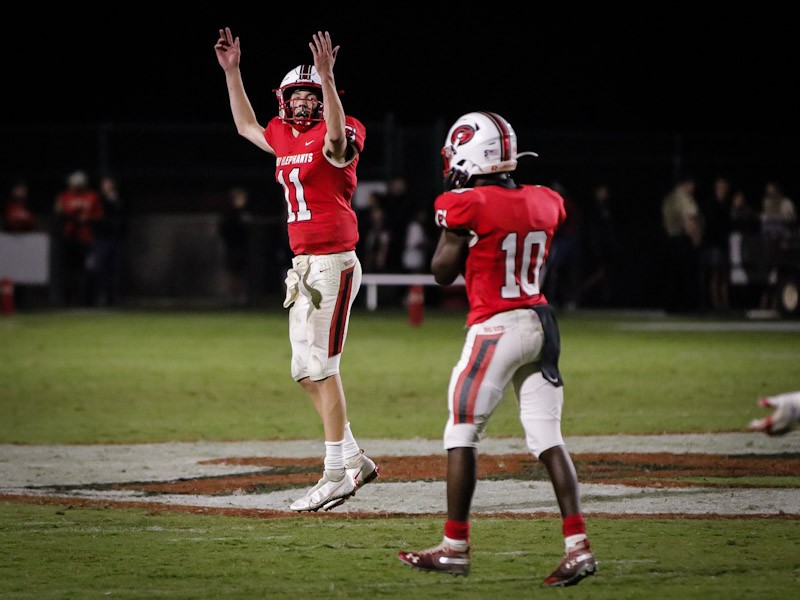 Sophomore quarterback Baxter Wright led the Red Elephants to a 42-35 win on Friday at City Park. He finished the night with 337 total yards of offense.
Photo/Seth Chapman 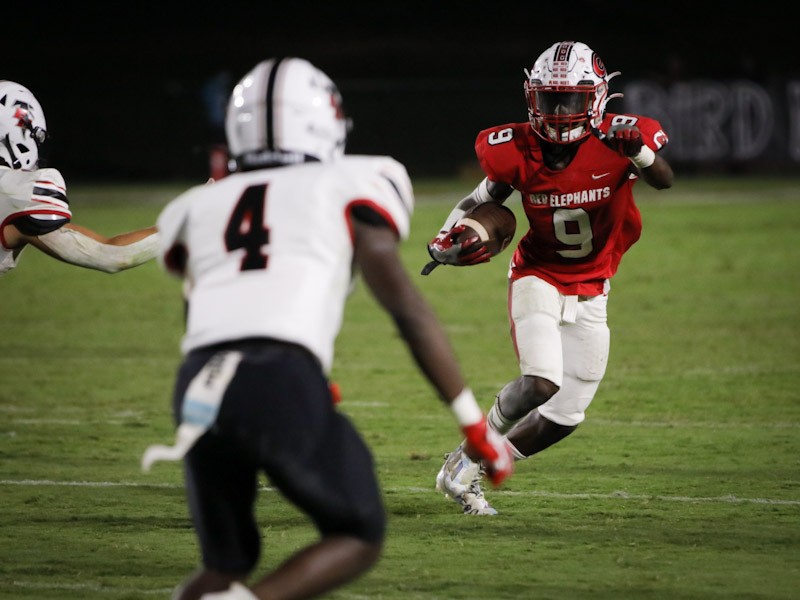 GAINESVILLE — Gainesville coach Heath Webb had several reasons to smile after the game on Friday.

The biggest reason: His Red Elephants (2-1) finished the job in a slugfest win, 42-35, to end the Falcons' (2-1) three-game reign in the series on Bobby Gruhn Field at City Park. It also was Webb's first win over the Falcons as head coach of Big Red.

But this young series, only 17 years old, already had a rich history, and Friday night's edition of the annual rivalry added another chapter.

Baxter Wright, who took the reins of the Gainesville offense this year, showed his maturity as a leader on the field. As Webb said, as Wright goes, so goes the offense. It did just that on Friday. The sophomore quarterback played like a senior, completing 21-of-23 passes for 289 yards and a touchdown. He also rushed for 77 yards and a touchdown.

"Baxter played his guts out tonight," Webb said. "There might be a debate as to who the best quarterback was on the field tonight. I was really proud of him and his development and as he goes our offense has gone. I'm glad he's going to be on my team for the next few years."

Wright also executed some electrifying plays, including, perhaps the biggest play of the game after being sacked for an 11-yard loss, a 26-yard third down-and-long conversion dart to DJ Miller on what turned out to be the sigh of relief moment for everyone on the home side. Two plays later, Naim Cheeks rushed in for the icing on the cake with a 34-yard touchdown run to push the lead, 42-28 with 5:17 to go.

"We finished drills, drives and converted third and fourth downs," Webb said after the game. "Anytime you don't have to punt that punt team on the field, it's a good night."

Gainesville didn't punt once but did turn it over on downs late in the second half. It was Flowery Branch's first stop on defense of the night with 3:01 left in the third quarter. It also was a shot for the Falcons to tie the game, but Gainesville's defense had other plans on the drive as Dre Raven jumped the hitch and took 37 yards to paydirt and a 35-21 advantage.

"Our defense played really hard tonight," Webb said about his defense. "We made some mistakes, but all in all, I thought they played well."

But from the start of the game, Gainesville set the pace, scoring on its opening drive, a drive that included five penalties, four of which were on the Red Elephants. Gainesville, however, powered through the penalities and a rushing Flowery Branch defense. Wright hit Cheeks across the middle on a 10-yard strike, then Cheeks did the rest rumbling 50 yards to the Branch eight-yard line, and on the next play, Marquis Ross put the Red Elephants in control, 7-0.

It was the beginning of the slugfest with both teams firing back and forth at each other. The Falcons answered with a 10-play first drive with senior quarterback David Renard finding the wide side of the field open for a nine-yard touchdown run to tie the game, 7-7 with 2:09 left in the quarter.

From there, the two foes traded scores, including a 98-yard kickoff return for a touchdown from Seth Larson to tie the game, 14-14, less than 20 seconds after Gainesville took the lead, 14-7 off a Cheeks 11-yard run.

The big return didn't rattle the Gainesville offense. They marched eight plays on the ensuing drive, with Wright completing passes to Ja'Quez Sims, Macere Walker and JQ Drinkard before rushing on back-to-back plays, an 11-yard run and an eight-yard touchdown run. The score lifted the Red Elephants to a 21-14 lead.

"We were really good up front tonight," Wright said. "Our receivers were able to get space. We had Naim as a check down, which opened up the field more."

On Branch's next drive, the most important drive of the game at that point, Renard converted a 3rd down play with a 25-yard pass to Jaheim Hayes near the 50-yard line, but the offense stalled out. It was Gainesville's first stop of the Falcon offense of the game with 3:29 to go.

But Flowery Branch wouldn't go away, answering on the opening drive of the second half. Renard completed two huge passes, a 26-yard pass to Larson, and ended the drive with a 26-yard strike to John David Peacock, cutting Gainesville lead, 28-21.

Later on, in the third quarter, Renard would strike again, hitting Ivey on a 10-yard swing pass in the flats to slash the lead back to a touchdown, 35-28 with 9:41 to go in the game.

"They're so dynamic on offense -- they've got a lot of playmakers," Webb said. "Anytime 12 [Renard] is on the field for them, you better be scoring points, because they're going to score some points. We knew we were going to have to score a bunch. I was proud of our offense tonight."

Ivey led the Falcons' rushing game with 88 yards on 19 carries and a score, while Hayes was the top receiver with 9 catches for 117 yards.