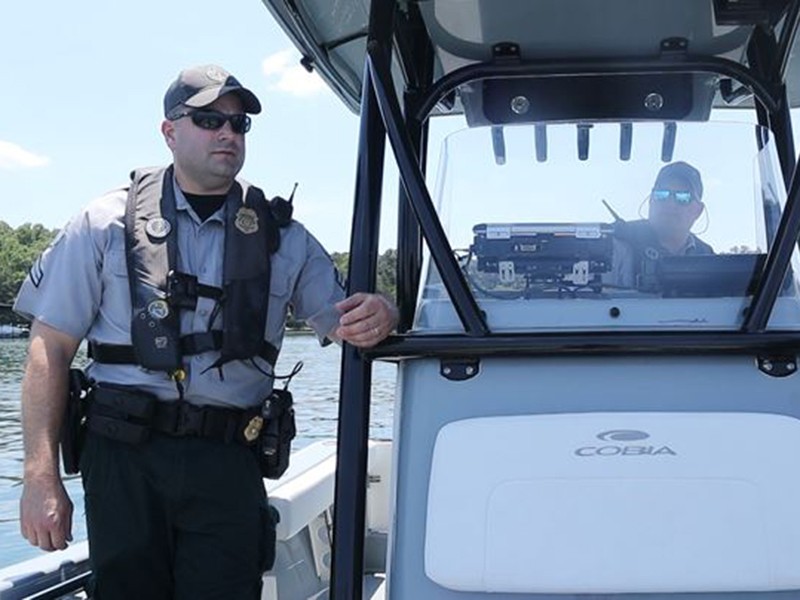 Memorial Day weekend is often considered the kickoff to boating season on Lake Lanier, so officials with the Georgia Department of Natural Resources are reminding the public of general safety tips when getting out on the water.

“We’re just looking to make sure that the public is doing the right thing and having safety in mind,” said Kevin Goss, Game Warden First Class. “We’re looking for life jacket violations, violations of the regulation markers and also alcohol and any behavior that we think needs to be addressed.”

Goss and Game Warden Corporal Dan Schay demonstrated their enforcement Friday when they stopped a boat in Holiday Marina for causing wake in a no-wake zone. The two men asked to see boaters’ life jackets, as well as safety features on board like a fire hydrant.

“We’re just going to be as polite and courteous as we can [to boaters] and we’re going to ask to see your safety equipment,” said Goss. “We’re not going to hold you any longer than we need to see that safety equipment and make sure you have a safe day.”

Indeed, Goss and Schay were polite to the boaters, who were polite in return. The entire encounter lasted no more than ten minutes, with no citations or tickets issued or arrests made.

The enforcements are not without warrant. According to information provided by DNR spokesman Mark McKinnon, four boating incidents have occurred on Lake Lanier this year, resulting in seven injuries with no fatalities. In addition, two drownings have been reported on the lake.

The difference between a boating fatality and a drowning is a common misconception among members of the public. According to the National Association of State Boating Law Administrators, a boating fatality is recorded when a victim enters the water from a boat in motion. On the other hand, a drowning is defined as when the victim enters the water from a stationary object, including an anchored boat.

While it is not illegal to drink while operating a boat or have an open container on a boat, it is illegal to be drunk while behind the wheel. Goss said DNR officials look for behavior in motorists and passengers to determine if a stop needs to be made.

Goss added that DNR officials will be patrolling the lake and surrounding parks more heavily this weekend.

“We aim to have as many folks as we can out here, a lot of time we partner up with our Sheriff’s deputies and that really helps boost our manpower,” he said.

More information about boating regulations and safety tips is available on the Georgia DNR website.