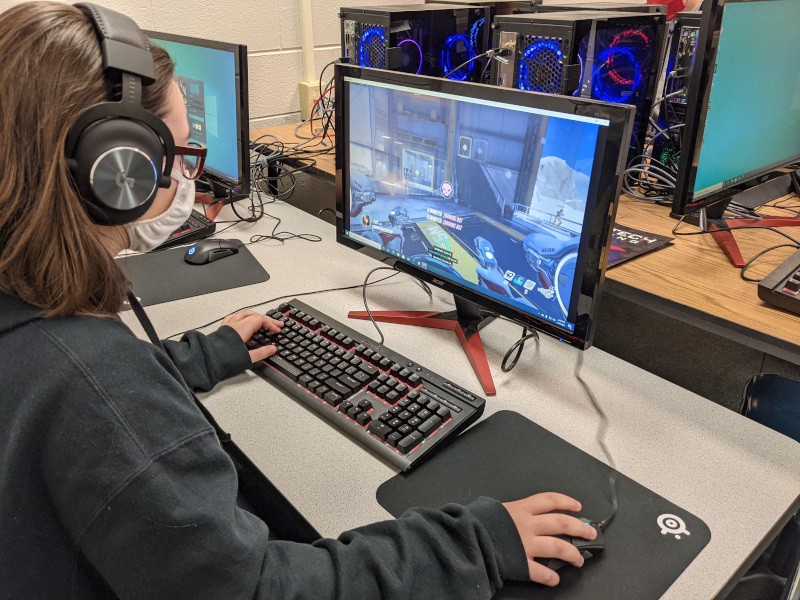 When it comes to High School sports, physical sports like football and baseball tend to take up the spotlight, but at Jackson County Comprehensive High School, another sport is working its way into the light – eSports.

eSports is a digital sport focused on playing video games competitively against others. While there are professional eSports teams like the Atlanta Reign, Jackson County High’s esports teams focus on competing against other high schools in the southeast.

“We basically do all the same things every other sport does. We scrimmage, we practice, we get together and we brainstorm ideas and come up with plans and we develop skills,” Robert Andrews, computer science instructor and esports general manager at JCCHS said about the esports club.

“Last year I went from absolutely zero knowledge about the program to actually going into a post-season tournament with our group from League of Legends,” Andrews said.

League of Legends is one of four games that students in the esports club at JCCHS can compete in. The PC game has a focus on team co-operation and has taken the world by storm since its release in 2009.

In fact, the 2020 League of Legends World Championship Finals hit a viewership record of 23.05 Million Average Minute Audience, according to LoL Esports.

“It’s an addicting game,” Noah Woods, captain of the varsity League of Legends team at JCCHS said. “No matter what game you’re in, you’re always going to play against people that are better than you, and then you want to be better than them.”

While Woods appreciates the game itself, he also said being on a five-person team has contributed to his development as a young adult.

“I certainly work better with people now. I was not a people person when I first joined. I barely talked, but now I’ve gotten a lot better at leadership and a lot better at talking to people,” Woods said.

Woods is not the only student in the club who has experienced growth in leadership skills.

“I was wanting to get the chance to learn how to be a better leader with this kind of thing,” Ethan Carver, captain of the junior varsity League of Legends team at JCCHS said. “So, this was hitting two birds with one stone, me having fun while doing it, and probably learning how to lead a little bit better.”

Andrews said he feels that there is often a population of the school that is not served quite as well in terms of extracurriculars, and the esports club could be an option for that population at JCCHS.

Another student who has been able to take a skill in a video game and apply it to a team mentality is Dottie Holder, who is captain of the JCCHS Overwatch team.

“I’ve been into [Overwatch] for about four years now, actually, my step-mom got me into it. We all play as a family,” Holder said.

Overwatch, a lighthearted first-person PC game, is a cooperative game just like League of Legends. Holder said she has an interest in continuing to play Overwatch competitively, even after high school.

“If I get into a college that has an esports team for Overwatch, I’m definitely joining it. I really wish that I could be on Overwatch League but it’s going to take me a lot of time and a lot of practice,” Holder said.

Andrews said in the future, he hopes to help students pursue their passions by making connections with colleges that offer scholarships for esports.

“I get a lot of joy out of seeing them get excited about these things,” Andrews said.