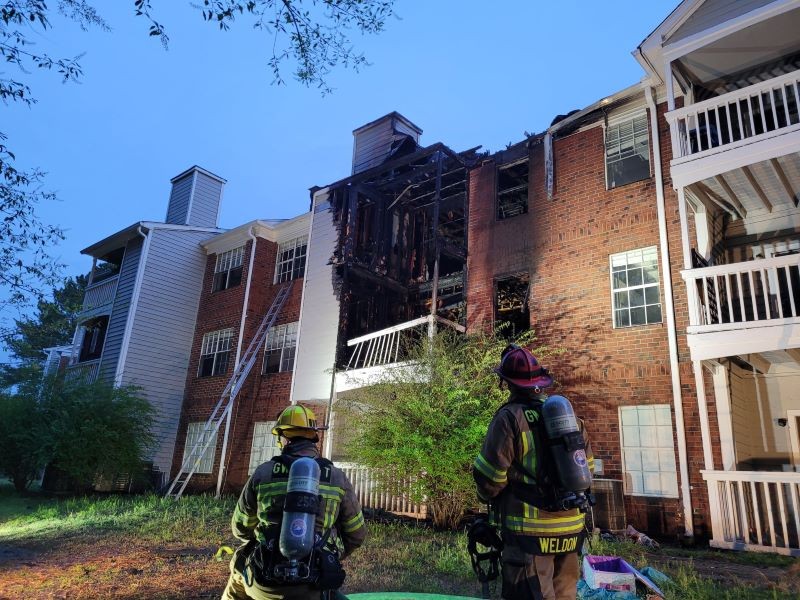 When Gwinnett County firefighters arrived at the Anzio Apartment Homes in Lawrenceville early this morning, they found Building 18 in flames.

The fire was coming from the first floor but was already extending up into the attic. Firefighters quickly deployed fire attack hose lines and knocked down the flames enough to move inside and extinguish the fire. It took around 40 minutes to bring the fire under control.

Two of the 14 units were extensively damaged by the flames, with minor smoke and water damage throughout the rest of the building.

Although no one was injured in the fire, 25 adults and 11 children were displaced, according to Lt. Justin Wilson with Gwinnett Fire.

"We're very lucky that a working smoke alarm did activate and alerted one of the occupants, who was probably in the most danger with the fire being in the apartment below him, and he was able to safely evacuate out the front door," Wilson said.

The American Red Cross was contacted to assist those who were displaced, and Wilson said most of the residents should be able to return to their apartments once the power is back on.

A fire investigator responded to the scene and determined that the fire started on the rear balcony of a main floor apartment in the center of the building. They are still investigating to determine a cause. Wilson said the occupant of that apartment was not home and could not be questioned.