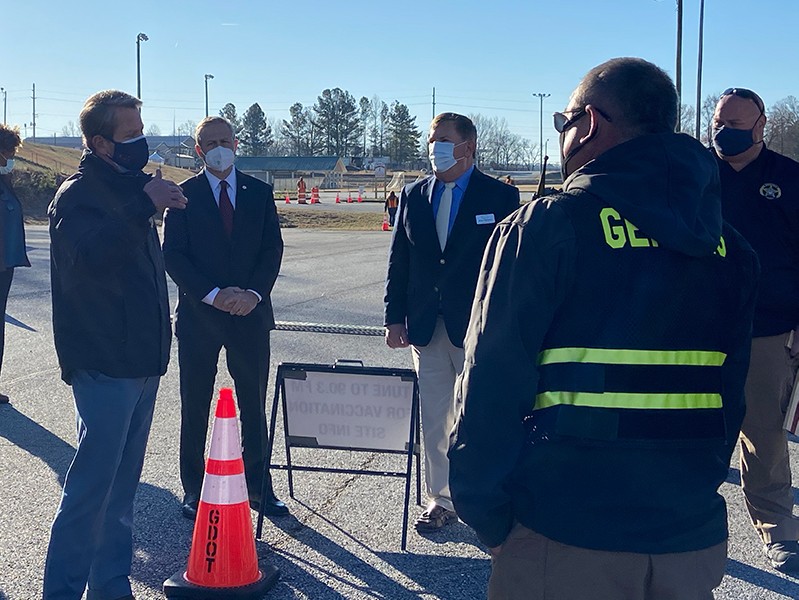 Currently, 1,100 people per day are able to receive a dose of the Pfizer COVID-19 vaccine at the mass vaccination site in Habersham County, and healthcare workers administered the 10,000th dose this morning while Governor Brian Kemp was touring the facility.

Kemp praised the progress of the site following his tour of the facility, which is set up at the Habersham County Fairgrounds in Clarkesville and opened its gates on Feb. 22.

“This site has been unbelievable…it’s doing exactly what we thought it would do and really running at full capacity,” said Kemp. “I was told this morning that no dose has been wasted here, which is what our goal is.”

Excitement over the vaccine and the site was felt among many of the passengers of the cars lined up this morning outside of the facility, including Toccoa native Saskia Swinton-Cineas, who got her vaccine during Kemp’s visit.

Swinton-Cineas said that she is thankful for the arrival of the vaccines for the benefit of others, not just herself.

“I know that it has been detrimental to other people’s lives…I did have a sister who got COVID and I was very scared for her and also for the well-being of my son, who has severe asthma,” she said. “I’m just hoping that things turn around, not for us to get outside, but so that no more lives are lost.”

The Habersham County site is one of four mass vaccination sites operated by the Georgia Emergency Management and Homeland Security Agency. An additional five sites will open throughout the state on March 17.

Beginning today, a few additional groups of Georgians are eligible to receive a vaccine. These groups include educators working with grades Pre-K through high school, adults with intellectual and developmental disabilities and their caregivers and parents of children with complex medical conditions.

While it’s too early to tell exactly how many of those in line at the Habersham County facility this morning are among this recently-added group, site manager Don Strength said that he noticed a difference.

“I know that today moved very quickly once the governor made that announcement last week,” said Strength. “It was quite obvious that we do have a lot of educators coming through today.”

In the meantime, only those who are healthcare worker, a resident of a long-term care facility, a first responder or who is 65 years of age or older have been eligible for a vaccine. According to Kemp, more than 900,000 senior citizens in Georgia have received one or more doses of a vaccine, which is 64 percent of the state’s elderly population.

The final statistics he shared are the statewide COVID-19 hospitalization and test positivity rates- both are down to 11 percent and 6.1 percent, respectively.

“What we are doing is working, but we have to continue to keep our foot on the gas…that’s what they’re doing at this site and that’s what we are going to keep doing,” said Kemp.

Kemp did not say if the state would get any additional allocations of the vaccine in the near future.

Strength added that eligible community members who do not have access to internet can call 844-275-5388 to schedule an appointment. Anyone who receives the first dose of the vaccine will be contacted either by phone or email within two weeks for a second dose.