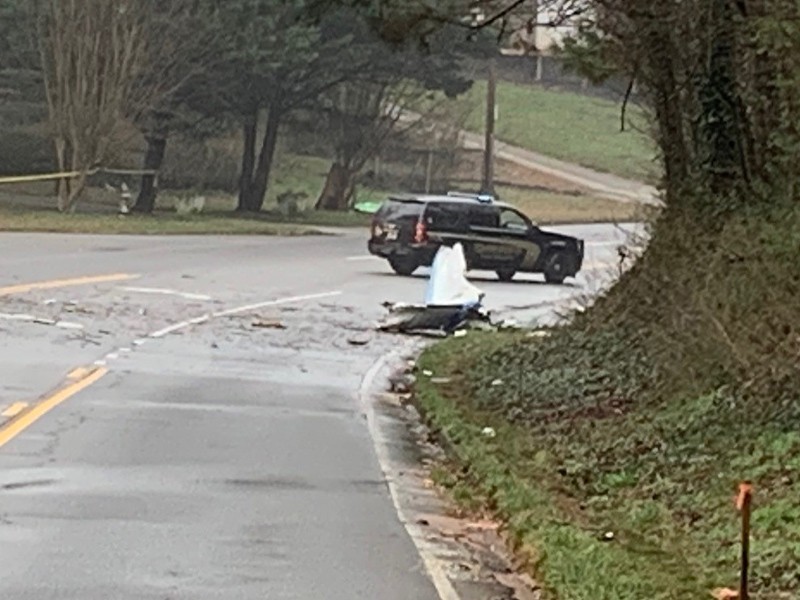 A piece of debris from a Cessna 182 lies in the edge of Memorial Park Road, not far from Lee Gilmer Memorial Airport. Photo by B.J. Williams
Contact Editor

Investigators from both the Federal Aviation Administration and the National Transportation Safety Board are trying to determine what caused the Cessna 182 to crash in a neighborhood off Memorial Park Drive just southwest of Lee Gilmer Memorial Airport.

The Hall County Sheriff's Office said Memorial Park Road from Memorial Park Place to Catalina Drive and Cross Street from 2nd Street to 4th Street will be closed until investigators complete their work, which will continue through at least Monday. Motorists are asked to find alternate routes around the area.

The investigators were reportedly collecting evidence and debris from the area. It was not immediately known how long the investigation might take, but officials were expected on the scene through Sunday night, according to a post on the sheriff office's Facebook page.

The crash killed three people, Dan Delnoce, 44, and Courtney Flanders, 45, both of Gainesville, and Matthew Delnoce, 39, of Ohio. They were en route to Daytona, Florida, according to the flight plan filed with the FAA.

Officials have not yet said who was flying the plane, nor have they offered a possible cause from the crash.

The plane crashed into a ravine just north of Memorial Park Road, with damage noticed starting in the Titshaw Drive area, Brackett said.

A house on the ground was damaged by falling debris. Officials said five people were inside the house at the time, but no one was injured. The Red Cross was called to assist the family.