5 Things: What we learned from Round 1 of the high school football playoffs 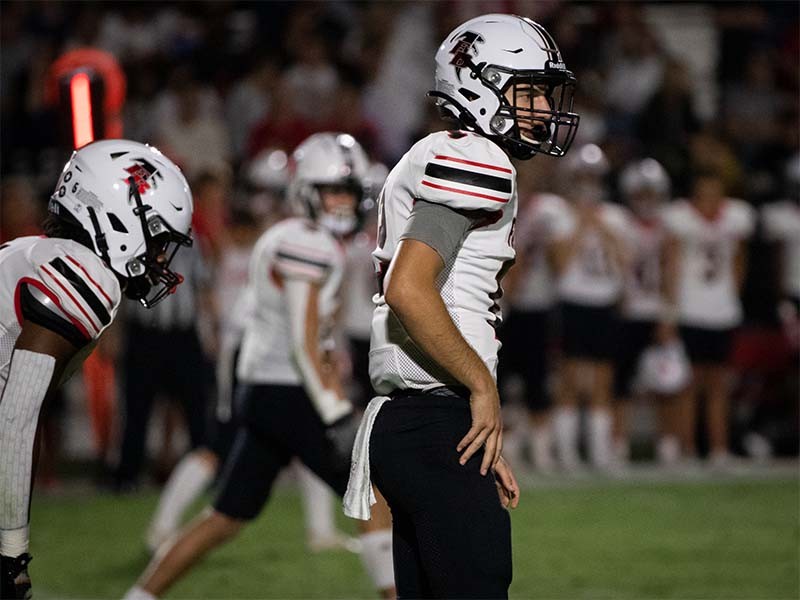 Upset wins, heartbreaking losses and wild finishes highlighted the first round of the state playoffs.

1. Cherokee Bluff is peaking at the right time

Cherokee Bluff's 38-17 first round win over Greater Atlanta Christian exercised some demons for not just themselves, but an entire region of the state Friday night. The Spartans were 17-0 all time entering the contest against Hall County teams and had dominated the old Region 7-3A including a number of other North Georgia teams. With that in mind, there was no way the 10-0 Bears would be overlooking G.A.C. even if they were 4-6 on the season entering the contest. Even with a losing record, they may have been the most talented team Cherokee Bluff has played yet this season and after taking an early punch, the Bears dominated them in the second half. When the Bears faced their first true test of the 2020 state playoffs, it ended in a 23-21 heartbreaking loss to Carver, Atlanta. This time it was a convincing win and one that proved that this year's team may be ready for a deeper run in the state playoffs. Things will certainly not get easier this week as they get ready to host a 10-1 Appling County team that has been ranked in the top five in Class 3A virtually all season.

2. David Renard reminds the state why he's a great quarterback

When Flowery Branch lost three games in five weeks in the middle of the season, a lot of the spotlight left a team that had been ranked in the top ten for the first month of the season. As a result, some folks around the state of Georgia may have forgotten just how good of a quarterback senior David Renard is. They were reminded Friday night in Atlanta. Renard ran for 114 yards and a touchdown and threw for another 154 yards and the most important touchdown of the season for the Falcons, a 10-yard pass to reclaim the lead in the final minute and give the team a 33-28 first round win over Mays at Lakewood Stadium. He has always been one of the best passers in this part of the state and led Class 4A in passing yards in 2020, but this year he has shown to be an almost equally effective threat as a runner. The game-winning drive Friday included a key 22-yard scramble on a 4th-and-11 that could have ended Flowery Branch's season. The Falcons will have to continue their road trek this week as they travel to Perry in the second round, but with Renard at quarterback, count out the Falcons at your own risk.

3. Dawson County's improvement has them playing as well as anyone in 3A

There may not be a more improved team in North Georgia from the beginning of the season to now than the Dawson County Tigers. The team started 0-3 with blowout losses to Flowery Branch and South Forsyth. While those were strong teams who had good seasons, even they may not want to play Dawson County right now. The Tigers have won seven of their last eight games with none being bigger than Friday night's 36-27 upset win over sixth-ranked Sandy Creek in Dawsonville. The Patriots were 9-1 entering the contest and just weeks removed from a win over previously top-ranked Cedar Grove. The game swung in the second quarter when Dawson County scored 19 points to turn a 7-0 first quarter deficit into a 19-14 halftime lead. Their defense has become the story as they held Region 7-3A champion Cherokee Bluff to just 14 points late in the season, shut down North Hall's wing-t ground game in the regular season finale and then managed to contain one of Class 3A's elite passing attacks in Sandy Creek. While they may be playing well enough to no longer be able to sneak up on teams, they are also playing well enough to not fear anyone in the state. A trip to defending Class 3A champion Pierce County in the second round will put all of that to the test.

4. Upsets ruled in the first round

Across the state of Georgia, there were a number of upsets in the first round of the playoffs. 24 lower-seeded teams won their first round matchups across the eight classifications, averaging three per bracket. Two of the biggest upsets were in Northeast Georgia. The first was the aforementioned Dawson County win over Sandy Creek, which wasn't an upset by seeding but was a major upset by most publications' projections. The other was an upset by every conceivable definition as Jefferson, who was ranked fourth in Class 4A and spent much of the season ranked number one, fell at home to Hapeville 12-10. The Dragons led 10-0 entering the fourth quarter but allowed two Hornets touchdowns in the final 10 minutes and were unable to put together a comeback drive. It was a heartbreaking ending to a season that looked to have as much promise as the 2020 season that ended with a trip to the state championship game. Those games should serve as a warning to any team around the state that anything truly can happen in the playoffs, and it can really hurt when it happens to you.

5. Rabun County may be getting better as the season wears on

The only concept scarier than having to defend Gunner Stockton, Jaden Gibson, Lang Windham and the Rabun County Wildcats is the possibility of them getting even better over the course of the season. Bad news for Class 2A: that appears to be exactly what's happening. The Wildcats have won 10 straight games and ran through Region 8-2A as most expected, but Friday night's first round matchup gave them a chance to directly compare themselves to where they were in August. Rabun County beat Pace Academy in a non-region contest in Week 2 and blew out the Knights 47-14 at Frank Snyder Stadium. In the first round they got to host the same team in the same stadium and the results were even more impressive. This time they won 63-14, snapping a five-game winning streak by Pace Academy and cruising into the second round. Stockton continued his statistical brilliance, throwing for over 300 yards and five touchdowns and running for over 150 yards and two scores. The top-ranked Wildcats appear on a collision course with second-ranked Thomasville in the state quarterfinal round, but they'll need to get through a second round matchup with a quality Jeff Davis team first.